Mille Lacs Tougher As Fish Have Wised Up 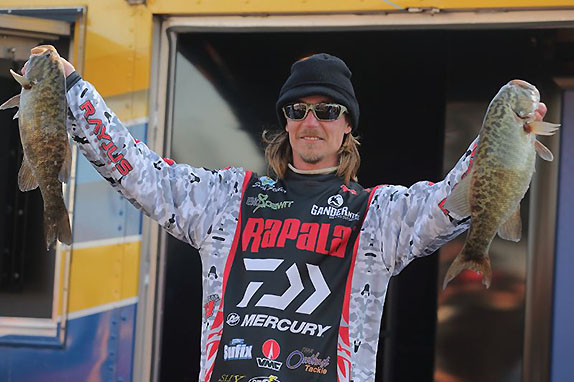 The smallmouth bite was spectacular a year ago when the Bassmaster Elite Series staged its Angler of the Year Championship at Mille Lacs Lake in Minnesota for the first time. The circuit has brought the top 50 on its points list back for another round this week, and the anglers are discovering that the fish are wiser and more sophisticated than they were a year ago.

There's a simple reason for that: pressure.

The big bronzebacks that inhabit the lake have seen a lot more boats and baits over the past 12 months than they had at any time previously (and considering the gin-clear water, they get a real good look at both). Mille Lacs, long heralded as a premier walleye fishery, became a destination smallmouth venue in the wake of last year's AOY Championship, when a slew of 5-pound-plus fish were paraded across the weigh-in stage, and just about every club within a day's driving distance has staged a tournament there.

Quite a few sacks weighing in excess of 20 pounds will still come to the scale, but not as many as in 2016. Some competitors will likely fail to catch limits each day.

"It's undoubtedly tougher," said Rapala director of field promotions and former FLW Tour pro Mark Fisher, exhibiting a decidedly more subdued tone this week when assessing the lake that he fishes frequently compared to his near-giddyness of a year ago. "The days of going out and catching 40 or 50 fish don't happen all that often anymore.

"It's a pretty resilient fishery and it's still intact, but it's an educated animal we're chasing. I think the lion's share of the fish that weight 4 to 5 pounds or more are still there, but a lot of the low-hanging fruit is gone. Those guys are going to have to dig in and figure out the trick to catching them."

Before getting more in-depth about the bite, here are some of the specifics of the fishery:

Here's a closer look at one of Minnesota's fabled fishing destinations, courtesy of Navionics:

Brandon Palaniuk brings a 15-point lead over Jason Christie into the derby, which means that he can clinch the title with a seventh finish of 15th or higher on the season. One of the top smallmouth anglers in the game, he placed 11th in this event a year ago. 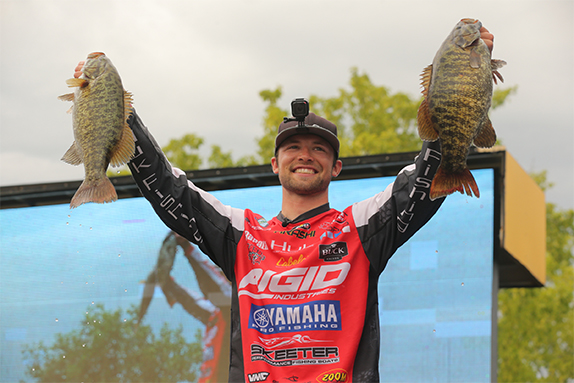 
Brandon Palaniuk enters the AOY Championship with a 15-point advantage over the rest of the 50-angler field.

Christie, who ended up 18th at Mille Lacs last year, and Jacob Wheeler are the only competitors with a mathematical chance of tracking down Palaniuk (assuming the latter catches at least one keeper).

At the bottom end of the top 50, stalwarts such as Skeet Reese (42nd) and Mike Iaconelli (46th) will attempt to move up to 38th or better and gain 2018 Classic berths. Iaconelli, who sits 30 points behind No. 38 Ish Monroe, will need a very high finish to achieve that feat. He hasn't missed a Classic since 2001 and his run of qualifying for 16 straight is the longest active streak on the circuit.

Dan Quinn, Rapala's field promotions coordinator (the company's U.S. headquarters is in nearby Minnetonka, Minn.) is in full agreement with his colleague Fisher that Mille Lacs bass have become more difficult to catch. He said that an uptick in the could be forthcoming, though, based on weather conditions that the region has experienced recently.

"One other factor is that we had some cool temperatures earlier than usual and that's going to get those fish moving to their wintering locations," he said. "They get grouped up and they get more aggressive and on the front side of that you can have some pretty good fishing. Still, I don't think it'll be as good as it was last year."

Winner Seth Feider, a Minnesota resident with vast experience on the lake, averaged more than 25 pounds per day in 2016. There's a chance that he top-end weights could threaten last year's numbers, but the massive sacks won't stretch as deep into the field.

"Seth and the real smallmouth experts should get into them pretty good. Even if the lake isn't quite what it was, it's still a tremendous place to go fishing and some guys will figure it out."

Here are practice notes from a few of the anglers who'll compete this week.

Josh Bertrand
"For me, it's been quite tough. This is my first time here and I'm just not running into very many numbers, although I have seen some quality. These are just old, beautiful fish and they're probably getting depleted.

"If you get a day when the conditions aren't good, it might be hard to get a limit. There might be a few other guys in the areas you want to fish. It might be that 95 percent of the people catch limits, but half of those will struggle to catch the five.]

"I know last time the guys fished here, 20 pounds wasn't super-great. I think averaging 20 pounds this time would be pretty good. It might not get you into the top 10, but you'd be well above average.

"There'll be less fish caught than some people think there will be, but it's still a heck of a lake."

Luke Clausen
"I haven't been here before and I was excited to come here, but not anymore. I'm ready to leave. It's largely sucked for me. I don't think I've caught more than 17 or 18 pounds on any day and I haven't caught that many fish overall. I'm genuinely concerned about catching five.

"I only saw one 4-pounder and one 5-pounder over the first two days, so it's not what I'd anticipated. There's a good chance you're going to be battling other people who want to fish the same places.

"You're going to see some people who don't weight a limit. There's little windows when they bite, but they're getting beat on pretty hard, too."

Jacob Wheeler
"The lake's fishing fairly tough. There's a lot of guys whining, which is typical whether you're on Lake St. Clair or the Sabine River. I didn't have any preconceived notions because I didn't fish last year, but that being said, it's been hard to get bites. When you do get a bite, though, it's the right size. 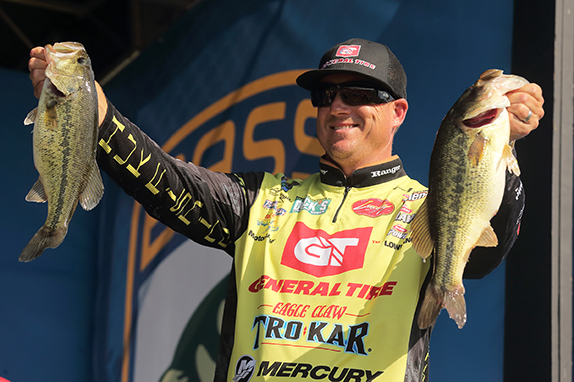 
Skeet Reese is one of several Elite Series stalwarts who needs an upward move in the points standings to make next year's Classic.

"My whole thing is I'm not under a lot of pressure (to make the Classic). I might catch them or I might not, I don't know. I just want to have fun and enjoy it. Guys have flat-out caught them all year long and it's been cool to be a part of that group."

Ish Monroe
"it's been pretty much the same as last year – I didn't have a good practice last year and I'm not having a good one now. I feel like I should be doing better with everything I learned about the lake last year, but it hasn't worked out that way.

"I've downsized my line to 5-pound (test) on my dropshot and I'd doing a lot of the little things we do out west on the heavily pressured lakes, but it doesn't seem to be working. With a lack of grass, these fish don't have a lot of places to hide.

"Every good rock pile is on (an electronics) chip – there's nothing that hasn't been found. These fish are very educated."

With the above in mind and more, here are BassFan's recommendations for the Top 10 to watch in this event.

1. Seth Feider – A tougher bite than last year likely gives the 2016 winner of this event an even bigger advantage. He may not average 25-plus pounds per day again, but he should catch considerably more than most.

2. Brandon Palaniuk – He's averaged a 10th-place finish over the last seven events after bombing in the second derby of the season at Lake Okeechobee, and then again at the Classic a month later. If he even comes close to that mark this week – and he's very likely to, as he's a superb smallmouth-catcher – nobody can prevent him from wrapping up the points title.

3. Aaron Martens – After a mostly lackluster season, he's gotten hot since the circuit moved to the higher latitudes of the North Country. Look for him to end up considerably higher in the standings than the 41st-place finish he posted a year ago.

4. Mike Iaconelli – High finishes have been pretty scarce for him this year, but he badly needs one this week. He's another guy who tanked in this event last year, but he's long had a propensity for delivering when he's down to the final few chips in his stack.

5. Jamie Hartman – The first-year pro has an astounding five finishes of 7th or better on his ledger, but he still hasn't wrapped up the Rookie of the Year title (he leads Dustin Connell by 23 points). Considering his bronzeback acumen, it'll be somewhat surprising if he doesn't log yet another single-digit placement.

6. Jacob Wheeler – Trailing Palaniuk by 33 points and Jason Christie by 18, his chances of claiming the AOY in his first year on the circuit are pretty slim. Nonetheless, he's had a superb year and he's a good bet to top it off with another high finish.

7. Jason Christie – Any slip-up by Palaniuk will give him an opportunity to snatch the AOY. Coming off a win last month at Lake St. Clair and 19th-place showings in the other two northern events, the mojo is on his side.

8. Seth Feider – The reigning Classic champion comes in on a strong role after finishing 8th at Champlain and 4th at St. Clair. He's real good year-round, but at his best when a season draws to a close. He should be heard from.

9. Jonathon VanDam – He barely made it into this event (he sits at No. 49 on the points list) and would need a huge finish to get inside the Classic cutoff, but he's certainly capable of such a performance at big bronzeback venue. Whether he makes the Classic or not, he's had a nice rally after a dismal start to the season.

10. Dave Lefebre – With four finishes of 68th or lower in the past five tournaments, he's had a rough second half of the campaign. He'll likely need a performance similar to the one he turned in at Mille Lacs last year (3rd) in order to sniff the Classic.

Anglers will launch at 6:50 a.m. CT each day from Eddy's Resort in Onamia, Minn.. Weigh-ins will take place at 3:45 p.m. on Thursday, Friday and Sunday at Grand Casino Mille Lacs. There will be no competition on Saturday, as all 50 anglers will participate in a special expo and conduct seminars for Bassmaster University.