BACK
Business Got Done

KVD Was Happy To Be At ICAST Again 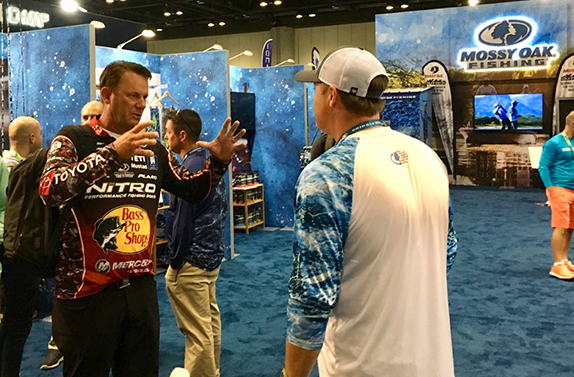 Kevin VanDam has a conversation in the Mossy Oak booth at last week's ICAST show.

For some who attended last week’s 64th ICAST trade show in Orlando, Fla., walking the aisles of the Orange County Convention Center and seeing what’s new in the fishing world was a little hard to believe. After all, the 2020 ICAST was canceled as the world was plunged into the dark abyss of the COVID-19 pandemic.

While the 2021 show footprint and crowd sizes were somewhat below the standards of the past, the show remained a good-sized event. There were still plenty of manufacturers, buyers, and media and enthusiasm was high.

Even as recently as a few months ago, some in the industry quietly wondered if we ever would really be here again.

Kevin VanDam wasn’t one of those who doubted. He was always confident that the show would go on.

“I’m just glad we are (here),” said VanDam on Wednesday afternoon. “Actually, I believed that (we would be here all along). Everybody in the industry was ready to get back and they were going to figure out and find a way to make it happen.”

VanDam was his usual busy self at ICAST, scurrying from one end of the convention show floor to the other with his wife Sherry, one of his two sons, a cameraman, and angling fans who wanted to get a selfie or an autograph from the man who has won 29 professional fishing tournaments – including his first Bass Pro Tour victory a few weeks ago – to go along with four Bassmaster Classic trophies and three Major League Fishing Cup championships.

“I think that everyone is having a good time,” said the collector of $6.9 million in career earnings. “The people that are here, they are definitely serious and there’s a lot of business getting done. I think it’s probably been one of the most productive shows for me that I’ve ever had. Again, I think that everybody who is here, is here for the right reasons.”

While the sport’s :young guns" are making names for themselves, VanDam is unquestionably the face of modern bass fishing, a Mount Rushmore candidate and Hall of Famer who showed recently that he isn’t ready to go quietly into the night at age 54. And while he may not be ready to be the sport’s elder statesman just yet, he knows that he’s closer to the end of his career than he is to the beginning of it some 31 years ago.

KVD also knows that his status includes certain responsibilities, like packing up and heading south for the annual mid-summer trade show. But he admits in a moment of candor that the task is a bit of a grind and one that he hasn’t enjoyed as much in recent years, or at least as much as he did earlier in his career when he traded in his work as a boat and tackle salesman to start a journey that would lead to the summit of the sport.

KVD still moves the sport’s needle like none other and remains as popular as ever with manufacturers and fishing fans. Like usual, he could hardly move without someone wanting a piece of his schedule and he patiently smiled and posed for dozens of photos.

When I finally caught up with him, KVD was gracious and smiling as always, willing to answer the same questions he gets asked everywhere he goes.

My questions started with this simple one: Has he enjoyed journeying to the land of Mickey and his Magic Kingdom this summer, especially after the cancellation of ICAST a year ago?

“Absolutely,” said KVD. “I have been going to ICAST for a long time. Not every year, but for over 30 years, I’ve been going to ICAST. And, to be honest, (I was thinking) a couple of years ago, it’s not something that I look forward to now. It’s a busy time and it’s hectic. But after missing last year, I learned just how important it is and how much that I really missed it. And it’s not just the show, but the people who are here and that you get to see again.”

Like many others in the wake of the COVID scourge, VanDam realizes now that sometimes, the people and everyday moments we all take for granted at times are in fact, some of our greatest joys and blessings. Even if we don’t always recognize it at the time.

“You know, we’re here at ICAST (again) and, you know, especially after everything that we’ve been through, I think everybody appreciates the fact that we can once again get back together. And for our industry, (we’re all realizing again) how special it is, how small it is and what a great family it is.

“I mean, there’s so many people that I’ve already seen this week, it just brings a smile to your face and it’s just great to see the enthusiasm and the excitement. Everybody is passionate about fishing, it’s why we’re here, and it’s a great industry to be a part of.”

For VanDam, that industry includes the business end of things as well as engaging the fans who support the angler once known as the “Kalamazoo Kid.” But there’s also the year’s tournament schedule, which picks up again next week.
And in fact, with two more Bass Pro Tour events remaining on the 2021 schedule – one at Lake Champlain and the other at Lake St. Clair – a relaxed and focused KVD is hoping to end what has already been a very good year with an even bigger bang.

“Well, it would be nice to finish with two more,” he said. “Those trophies are nice. But it’s so tough against this group. I’m excited because I’m going to fisheries that I really like. You know, Lake Champlain is a great smallmouth and largemouth bass fishery, and I’ve got a lot of history there. And then to finish on Lake St. Clair, I couldn’t be more excited about that one.”

But he says that while the recent BPT win was certainly nice, it doesn’t serve to energize him any more than he was already motivated during the past three decades of his dominant career.

“I try to win every single time,” said the eight-time Angler of the Year (seven B.A.S.S. titles and one with FLW). “It’s always good (when you do win). Because I can tell you this, you never know when your next one will be, and when you win, you never know if that will be your last one. So they all are important, but as you get further into your career and you get a little older, I think you learn to appreciate it and you understand the magnitude of what really, any milestone is.
“(And) you know, winning is hard. There’s a lot of guys who have been doing this for a long time and never have even got one, so I don’t take it for granted.”

The one thing that everyone at ICAST had in common last week was that we’ll never take any of it for granted again.

And with that, KVD shook my hand, smiled, and headed down the busy ICAST show floor to his next appointment. As he did, the thought struck yours truly that the pandemic isn’t over with yet, there remain many challenges ahead, and who knows what the future will bring?

But for the moment, all was good in the fishing world as Kevin VanDam and many others were back at ICAST again, and that’s a good thing.