BACK
The 'Zing' Is The Thing

Make Backlashes A Thing Of The Past 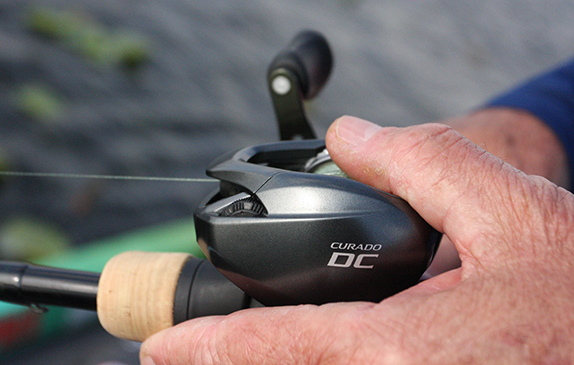 The Shimano Curado DC has the ability to limit or eliminate backlashes altogether thanks to its digitally-controlled braking system.

Bernie Schultz describes it as, “Weeeeee.”

To Jared Lintner, it sounds like a "smooth, consistent hum."

When he first heard it, Alex Davis was left wondering, “What the $&%*” before he reaching the conclusion that “It’s working.”

Albeit brief, all are fitting descriptions of the distinctive “zzziiiiiinnnnnggg” sound that’s made upon casting the Shimano Curado DC baitcast reel, which is being unveiled to the fishing industry this week at ICAST in Orlando.

During an outing at the incomparable Grosse Savanne Lodge in Louisiana earlier this spring, Shimano let a small group of outdoor writers get a hands-on look at the Curado DC, which incorporates a microchip into the internal braking system to constantly measures the speed at which the spool is spinning and automatically controls the brake force at every moment of the cast.

Grosse Savanne was more than a worthy testing and proving ground for the DC. Trees, bushes, hydrilla, pads and reed heads provide cover for a boundless population of bass ranging from 3 to 8 pounds. We fished a range of baits, from hollow-body frogs to big swimbaits along with a steady diet of swim jigs. The DC edition of the Curado was a standout performer alongside the new Bantam MGL and Curado K, its conventional sibling.

It's a powerhouse when hauling fish out of heavy cover and the digital braking shined through during an afternoon of heavy winds on open water.

When most BassFans hear the word microchip associated with a fishing reel, they likley assume it’s way too costly for their blood. Not so with the Curado DC.

The concept of a reel equipped with digitally-controlled brakes is not new to Shimano or the U.S. market. The company has used the feature in models sold in Japan for years and Shimano previously offered DC braking in its Calcutta TE round reel and the low-profile Calais DC featured it in the mid-2000s. The drawback was it carried a $649.99 price tag.

At $249, the new Curado DC should be attainable for the enthusiast anglers as well as hardcore tournament fishermen. While some may be alarmed by the distinct sound coming from the reel as the line peels off the spool, I say keep casting. It sounds more like a melody with each throw.

Trey Epich, a product development specialist with Shimano who spent the last 2 1/2 years on the Curado DC project, was the initial guinea pig during the process of developing the technology that went into the new reel. Rather than just insert the old DC technology into the Curado, an effort was made to tailor the braking system to the target user group.

While working in Japan to build a reel aimed at the U.S. market, Epich wanted to make sure the technology accounted for the difference in casting mechanics between a traditional American angler and a Japanese angler. 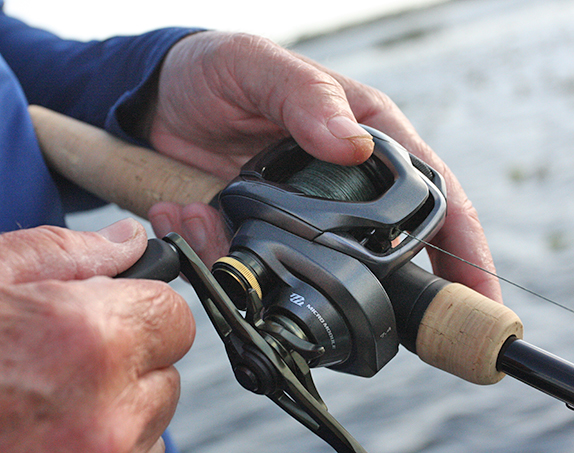 “I was average guy,” Epich said. “We have a different casting motion so they hooked sensors up to me and we did ergonomic studies and rented out baseball domes and casted there and did a bunch of stuff.”

The way the braking system works is as the spool spins, an electric current is generated through small coils connected to the microcomputer that constantly measures the spool speed and controls it to prevent backlashes. The speed of the spool is measured at intervals of 1/1000th of a second to ensure consistent performance.

“The idea is to make the baitcasting experience more enjoyable for everyone,” Epich said.

The headline-grabbing feature of the Curado DC is you cannot backlash it. It. Won’t. Do. It. I tried pretty hard and couldn’t make it happen. And that’s coming from a writer/novice angler who’s handled, er, mishandled his share of pro anglers’ gear. Members of the Shimano pro staff have tried, too. No luck.

The reel has no internal brake adjustments, just a four-setting external dial and a standard cast-control knob. The microchip does the rest. Sure, there are scenarios (say, lightweight lure in windy conditions) where some line overrun may occur, but overall backlash frequency will be reduced dramatically once the settings are dialed in.

Prior to coming to Grosse Savanne, Schultz had fished with the Curado DC at Bienville Plantation, another fishing resort in Florida where giant Florida-strain largemouth swim. Its durability, even with all the technology built into it, is one of the reel’s standout features to Schultz.

Schultz would know. He was among the guinea pigs who helped test the first Shimano reels with digital control technology in them back in the early 2000s. The latest version is obviously more compact and lighter, and will offer high-end performance to anglers with a range of skillsets.

“It’s on a great frame,” Schultz added. “The Curado is a great size and the DC enhances it so much more. And it’s affordable. I don’t care who you are – you’re going to backlash so if I have a reel that can defeat that, then I’m making most casts than the other guys.”

The Curado DC has some serious curb appeal, too. The frame is a sleek gunmetal hue and is paired with a deep, forest green star drag, handle and gold-trimmed cast-control knob.