BACK
Cover A Lot Of Water 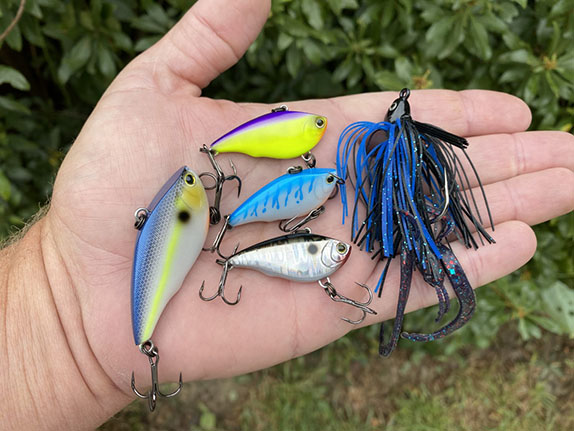 Small lipless crankbaits and swim jigs can be highly effective for bass that are keyed in on tiny baitfish in the fall.

When early fall arrives, we enter the "Twilight Zone." Fish are spread out and leery of many lures. Sometimes it's hard to make sense of what's going on and it's generally a little tougher time of year to catch bass on reservoirs.

Through years of experience, I've found that the solution on many occasions is to switch to smaller lures. Specifically, I use a lot of small lipless baits and a special small swim jig that are really underutilized, and I feel that they give me an edge when the leaves start to turn brown.

Two types lakes or rivers – those with little shoreline cover and those with a lot of it – require different approaches.

First, on lakes with little shoreline cover, lipless baits have always been mainstays for me in cooler water.

For example, one of the best lures of all time, the 1/2-ounce Yo-Zuri Rattle N Vibe, has a unique shimmy as it falls. This is deadly in the cooler months, especially when pulled up off the bottom and allowed to fall back with a shimmy. This lure is also made in two smaller sizes (1/8- and 3/8-ounce).

These are really small lures that many bass fishermen overlook. The 3/8-ounce may not seem small, but one look at it and you’ll see that it is.

Most bass fishermen wouldn’t consider the 1/8-ounce until it's too late and they have nothing in the boat to entice those schooling bass chasing tiny bait in the back of a creek.

I often start out with a 3/8-ounce Rattle N Vibe on lakes I know are a little tougher in the fall and cover water with that. The 3/8 is my favorite – even though it's small, it casts like a rocket on a baitcaster, so I don’t have to pick up the spinning rod until I get out the 1/8. Often the 1/8, which again is a super-tiny thing, is absolutely a killer on fish when they are eating miniscule bait.

I fish the 3/8 on a 7 1/2-foot Falcon Lowrider Cranker II graphite rod with 12-pound Yo-Zuri Top Knot fluorocarbon. This rod is very soft and it loads well to sling the tiny baits out to great distances, which is critical on big flats in the backs of creeks. Also, the bait has size 8 trebles, so you don’t want a stiff rod.

I fish the 1/8 on a 7-foot Falcon Lowrider or Expert Series spinning rod with 10-pound Yo-Zuri braid to a 10-pound fluoro leader, or just straight 8-pound Yo-Zuri Hybrid. The braid casts a lot farther, so it is preferred. I attach the leader with an Alberto knot, which in my opinion is the easiest to tie.

My general routine is to go almost to the back of flatter creeks and fish the shallow flats with the lipless baits. I take note of the size of the bait and how deep it is. If I see just billions of shad, I generally leave if I’m not getting bites and try to find a creek with shad present, but not so many that the bass are stuffed and uninterested in any lure. 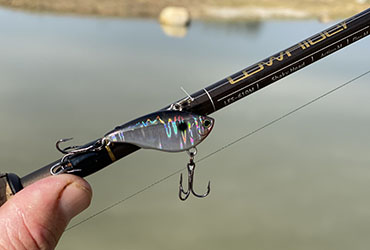 
A small Yo-Zuri Rattle N Vibe can be thrown a long distance on baitcasting gear.

I generally stick with shad colors and silver hues in the Rattle N Vibe, but if the water is a little dingy, my favorite color is chartreuse with purple back. The 1/8 actually comes in some UV colors for walleye fishing and they are really good at sticking out in a crowd of shad as well.

If there are a lot of stumps and I’m getting hung a lot, I’ll switch to a Yo-Zuri 1.5 crankbait, which is like 4-wheel drive around stumps, or pitch a 6-inch Culprit Fat Max in a shad color to visible stumps.

The other scenario is on lakes that have an abundance of shallow cover, or the shoreline grass on rivers. Many times on these lakes, the bass are in the thick weeds and crankbaits aren't an option except on the edges.

This is when I fish another secret weapon – a downsized 1/4-ounce tungsten swim jig from Eco-Pro called the Sick Boy with a 3-inch Culprit Flutter Craw as a trailer.

With this combo I fish down shoreline grass like water willow, or shallow wood, covering as much water as possible. This is one of the simplest, purest forms of fishing and it's so much fun, as bites seemingly are really random and catch you by surprise.

I rig this on a 7-foot-3 Falcon Expert rod and 50-pound Yo-Zuri Super Braid and I make sure I have the batteries charged up. I just go and go and many times a pattern develops as to where they bite, but not always.

Sometimes they're in the back of pockets, other times they're on points. Fish move around a lot if they have tons of shallow-water cover to patrol in an area. If they have one piece of cover, they generally sit and wait for something to come by, but when they have lots of possibilities they tend to cruise around, often in small schools of two or three.

The swim jig is the most efficient bait I know of for this situation and provides the option to slow down and drop it in holes or skip it under docks and trees.

Downsized lipless baits and small swim jigs are often overlooked and under-fished, but they can help you catch a lot more bass this fall.