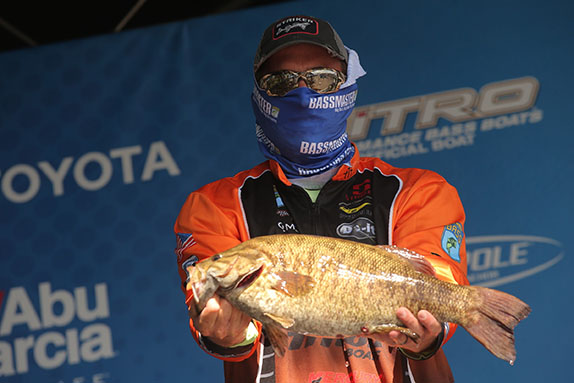 Runner-up Paul Mueller caught "the fish of a lifetime" on day 1.

Following are some pattern details for anglers who finished among the top 5 at last week's St. Lawrence River Bassmaster Elite Series. For details regarding winner Chris Johnston's pattern, click here.

Paul Mueller came within one position of his second victory of 2020 (he won the season opener at the Harris Chain). He waged a two-man duel with Johnston throughout and held the lead for the first three days, but weighed a far lighter bag on the final day and came up about a pound and a half shy.

As a consolation prize, he caught what he termed "the fish of a lifetime" on day 1 – a 7-13 smallmouth. The big bronzeback was more than a pound heaver than any other fish caught during the event.

He was committed to fishing Lake Ontario and gave much of the credit for his strong showing to his Garmin electronics.

"The LakeVü HD mapping allowed me to find the places I fished and identify the depth zone where the fish were," he said. "Without it, I wouldn't have been able to find those tiny places on a massive body of water like that.

"Anytime I have the opportunity to use a map to my advantage, I tend to do well in those tournaments."

He worked rocky cover at depths ranging from 17 to 35 feet. Some of his spots featured just one good-sized boulder, while others had isolated rock piles or ledges.

"The main thing about the piles or the shelf rock was I was trying to hit any crevice where a goby could hang out. That's where the smallmouth were congregated, just sitting there waiting for the gobies.

He stayed off the fish as far as he could and made long casts with a Berkley MaxScent Flat Worm on a dropshot rig.

"I have a tremendous amount of confidence in that worm," he said. "I learned real quick at the AOY Championship last year that Great Lakes smallmouth love that bait."

> He rigged his weight 18 to 24 inches below the hook depending on the size of the rock (the larger, the longer). 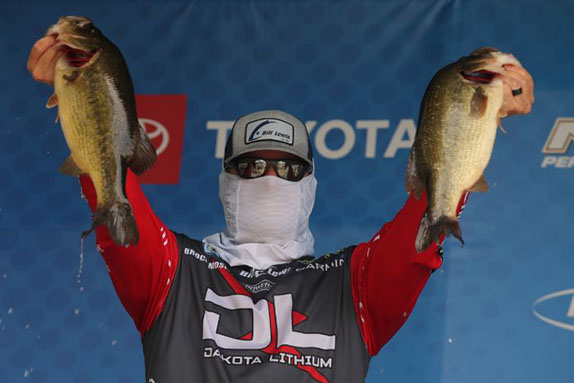 Brock Mosley posted a runner-up finish at the St. Lawrence in 2017 by catching smallmouths, but this time he rode green fish to a single-digit showing while he became a father for the second time.

"I had a bad practice," he said. "My wife went into labor Wednesday night, which I knew was going to happen sooner or later on this trip, and I was real concerned all week and my head just wasn't right. I got frustrated with the smallmouths – it seemed like the bite was a lot slower than it had been in previous years.

"On the third (and final) day of practice I just went to the bank for a little bit to clear my head and I caught a few largemouths, including a couple of good ones. I decided I was going to fish for largemouths until I had 17 pounds, then I'd go chase smallmouths. I thought I could salvage some points and maybe make the 40-cut and go on to the next one."

He caught 19 pounds worth of largemouths in the first 2 hours of day 1, then culled with 6 1/4- and 4 3/4-pound smallmouths from deepwater on a dropshot rig. Those were the only brown fish he took to the scale for the event.

"Things kind of clicked and I really dialed in the largemouth on day 2. I just kept adjusting and figuring out what they were keying on."

He caught them from docks, rocky banks, boulders and various other ambush points in 2 to 12 feet of water. Most of them bit a ChatterBait and a few were enticed by a topwater plug.

"The reason I stuck with the ChatterBait more was because I could cover so much more water," he said. 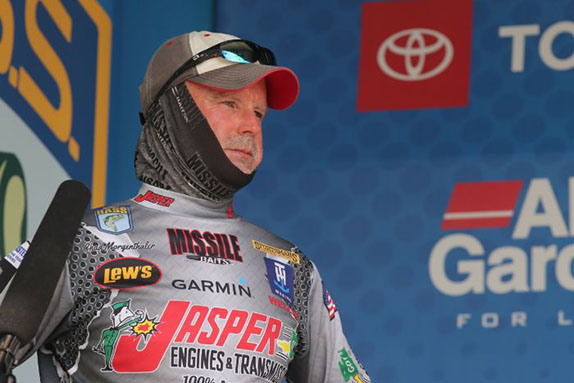 
Chad Morgenthaler caught big bags on each of the first three days.

Chad Morgenthaler had pretty much decided he'd focus on the river when he spent the last few hours of the second practice day on the lake.

"I was idling some stuff and I saw some fish (on his graph)," he said. "I figured I wasn't coming to the lake (during competition) so I might as well catch a few of them. I caught six and they were all over 4 pounds.

"I figured there might be something to it so I started looking around the area. It was the break of a big flat that ran through the middle of a bay. It was three-quarters of a mile long and it had the right rock. I started easing down it on the trolling motor and found five or six more spots."

He pulled fellow Reeds Springs, Mo. resident Brian Snowden in on the deal so they could completely dissect the bay. They discovered some productive places on the other side, as well.

"We looked at the forecast and saw that we'd have a couple of good (weather) days on the lake and we both figured we'd just go there because we didn't have anything that good on the river. I got there first and had a little more time in the area, so I think I found the sweet spots quicker, but he had a good tournament, too (Snowden finished 19th)."

He saw most of his fish on Garmin LiveScope before casting to them.

"If they'd get off the bottom for me, even just a little, I could distinguish them from the rocks. The I'd make the longest cast possible because they were getting spooky."

He opted to stay in the river on the final day. He caught both largemouth and smallmouth in the French Creek area, but the size was lacking.

"It was a lot slower there than it was in practice," he said. 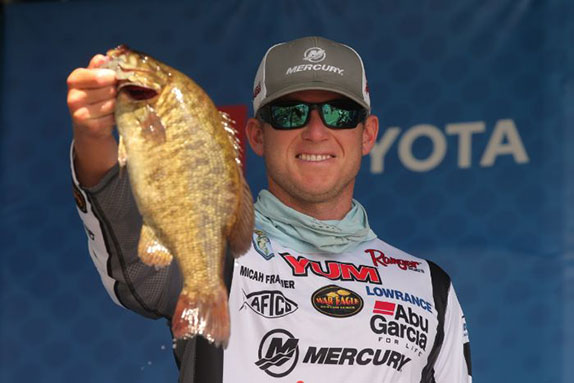 
Micah Fraizer, the winner at the St. Lawrence in 2019, posted another single-digit finish.

Micah Frazier couldn't fish many of the locations that produced his winning fish in 2019 – they were off limits due to coronavirus restrictions.

"Just about everything I fished last year was in Canadian waters," he said. "The one area of the river I fished this year wasn't really good last year, so it was totally different."

That area was about 30 miles downstream (to the northeast) from the launch site in Clayton, N.Y. He fished shoals, reefs, ledges and current-related cover at depths ranging from 16 to 25 feet.

"I landed in the right area for the river," he said. "If it had been a river-only tournament I might have fared a little better, but the lake dominated like I expected it would. I feel like I did as well as I could've done considering that the lake was in play and I don't have any regrets.

He threw the same YUM Ned Dinger that had carried him to victory the previous year.

"I kind of drifted it like you would a dropshot. How far the bait got away from the boat depended on current and other factors. If it was calm, I could drift it naturally with the current. When it was windy, it was hard to do that."