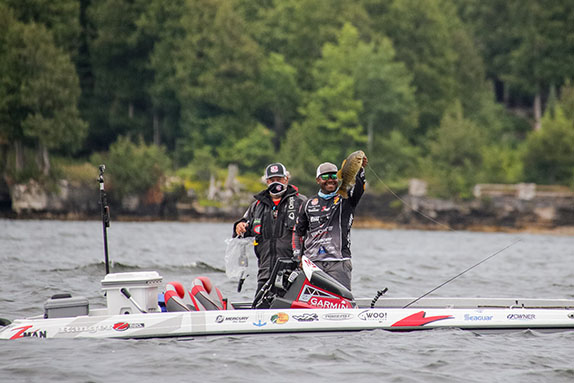 Mark Daniels Jr.'s fortunes improved greatly when a big bunch of fish showed up on a place where they hadn't been for several days.

Enticing the smallmouth bass in Sturgeon Bay to bite wasn't too much of a problem during last week's Bass Pro Tour season finale in Wisconsin. The issue was staying on top of them as they moved from one place to another û from deep water to shallow and back.

The big groups of bronzebacks often were not in the same place from one day to the next and in some cases they vanished during mid-day weather delays or even the 15-minute breaks between periods.

When anglers were around them, they could them with finesse tactics. Following are some details of the programs employed by the competitors who finished in the 2nd through 5th positions behind winner Justin Lucas.

Mark Daniels Jr. caught more than 100 pounds in the Championship Round and made a valiant attempt to chase down Lucas at the end of the day. He was the winner of the previous day's Knockout Round, which he barely qualified for û he was the 20th-place finisher in Group A with a two-day total that was almost 130 pounds less than Lucas compiled.

He had little confidence entering the Knockout Round and almost opted not to check on a place where he'd found fish during practice, but had been barren on each of the handful of times he'd visited it during the tournament.

"I rolled over and it seemed like every bass in the lake was magically there," he said. "They'd decided to come back. Their timing was perfect."

The place was a large shoal on the bay side of the Door Peninsula.

"I stayed on the outside of the shoal and casted to the top," he said. "The school would bust up a little bit after a while and then I'd pick off individuals using (Garmin Panoptix) LiveScope."

Almost all of his fish bit a Ned-rigged Z-Man Finesse TRD.

"There was so much natural current due to the wind that I didn't have to work the bait û if I worked it, I wouldn't get bit. Letting the natural current wash it over the top of the shoal was the best presentation.

"Just trusting my electronics and trusting my gut was the biggest thing for me. I knew that I'd found fish in several places and I had to have faith to go back and revisit them." 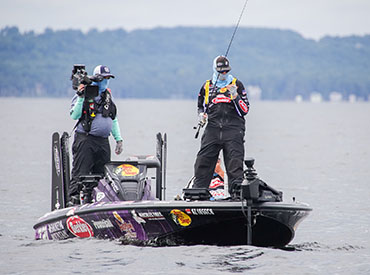 
Josh Bertrand turned in his usual high finish on a northern smallmouth fishery.

Josh Bertrand hails from Arizona, a state that's not exactly a smallmouth mecca, but he's developed a reputation as one of the top brown fish-catchers in the game. His record backs that up, as it includes a win at the St. Lawrence River and a bunch of high finishes on that venue and several other northern smallmouth fisheries from his tenure on the Bassmaster Elite Series.

He practiced on both sides of the peninsula for this event in an attempt to ensure he'd have fishable water no matter what the wind did. He stayed on the bay side during competition days.

"I figured if I found 10 places, three would likely be good in the tournament," he said. "I ended up having five that were good when I thought I had 20.

"There was a lot of baitfish present where I found groups (of smallmouth), so that's something I was looking for û it was really critical. I knew to stick with the dropshot. I had so much confidence in the technique and the bait (a Berkley MaxScent Flat Worm) that all I had to worry about was finding areas to fish."

He pulled smallmouth from rocky places at depths that ranged from 14 to 28 feet.

"They were big pieces of structure û the side of a reef or the point of a reef or an island. A couple of places had one key boulder that I might catch five fish off of. It wasn't super-specific, but again, having bait around was important.

"(Garmin) LiveScope was the biggest key for me. I'd see individual fish, or even better I'd see multiples and a lot of times I was throwing into a little wad of them. I didn't have places where there was a school of 100, but it wasn't uncommon to pull up and see six and catch two or three of them. The others would be like, 'Uh, no. Something's up.''' 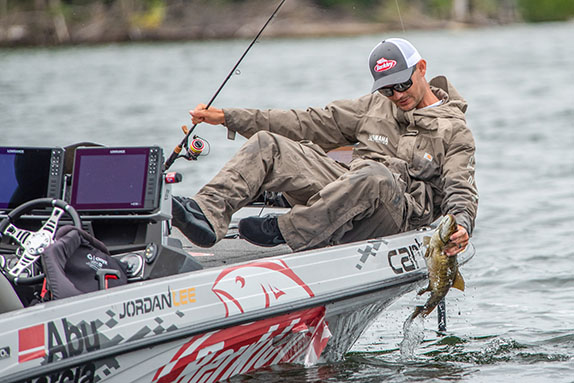 
Jordan Lee made the finals for the fourth time in five events.

Jordan Lee, the winner of the previous BPT event (Heavy Hitters at Florida's Kissimmee Chain), notched his fourth appearance in the Championship Round out of five events on the season. He clinched the Angler of Year title by advancing to the finals û he was the only competitor of the top 17 on the points list prior to the derby to achieve that feat.

He was the third member of the top 4 in the final standings to do all of his damage with a dropshot-rigged Berkley MaxScent Flat Worm.

"The main thing for me was just moving around a lot and not staying in one spot too long," he said. "The fish would bite if you were around them and a couple of days I ran into them just by moving. There were certain areas where they moved more than others and I was in one where they were constantly moving û they were really affected by the wind currents and all that."

He spent the tournament in the Sister Bay vicinity. A lot of his fish came from the 17- to 20-foot depth range but there were a couple of days when the bulk came from much shallower water. For instance, he couldn't get a bite or mark a fish from his deep stuff on the latter day of his Qualifying Round, but he found hundreds swimming around on a shoal that he sight-fished.

In the Knockout Round, he pillaged a flat with a little bit of grass that had fish in the 7-foot range to rack up 94 pounds.

"That was one of the best days of smallmouth fishing I've ever had for numbers and size," he said. "Then we had a weather delay for two hours and I go back out and there's not a bass anywhere. It was crazy to see how much they moved."

> "The color of the bait did not matter," he said. "I threw whatever I could get my hands on." 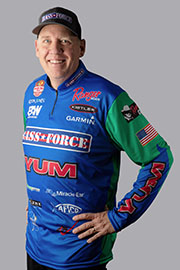 
Alton Jones never made a cast unless he could see fish on his graph.

Alton Jones likely has more experience on Sturgeon Bay than anyone in the BPT field.

"I've fished a Bassmaster post-season event and an AOY Championship there, but even before that, it's a place I'd come to on my own if I was stuck up north with a week between tournaments," he said. "I've probably got 40 to 50 days on the water.

"Anytime you've spent that much time playing around on a place, you learn a lot about it. And you're not hunkered down on fish like you are in a tournament, you're just exploring. When I found out this event had been diverted (from its original site at Lake Champlain due to coronavirus restrictions in New York), I was super-excited and hopeful. I knew that if I covered enough water that at some time I'd intersect a bunch of fish."

He caught the bulk of his weight from 8 to 12 feet of water, but some were swimming as shallow as 4 feet. He worked completely different areas on each of his first three competition days and was happy to discover that his fish from the Knockout Round stayed put for the finals.

He caught most of his fish on a dropshot rig, but a tube was also a big player.

"I alternated them û I could tell on Panoptix whether a fish was hot for a bait or not and if it didn't hit one, I'd try the other. Some would fire on one or the other and some wouldn't fire at all.

"I wouldn't make a cast unless I saw fish (on the graph). I put myself in target-rich environments and they wouldn't all bite, but some would."

He said his wife, Jimmye Sue, played a big role in his success.

"She's been my partner in everything I've done in this sport for the last 31 years," he said. "She makes all the reservations and launches me every day, and that's really important at a place like this where I'm putting in and taking out at multiple locations in the same day."