BACK
Daniels Also In Triple Digits 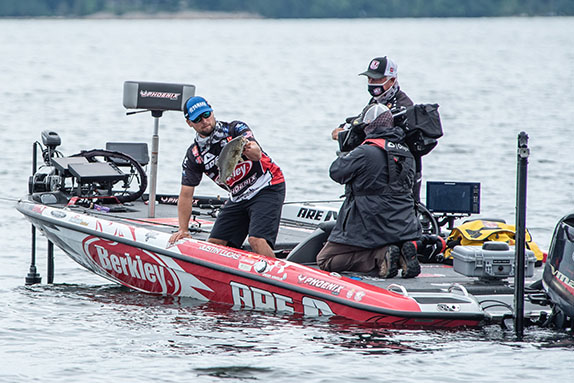 Justin Lucas took the lead late in the second period and held it the rest of the way to win the 2020 Bass Pro Tour finale at Sturgeon Bay in Wisconsin.

Justin Lucas didn't quite achieve his goal of catching 125 pounds worth of Sturgeon Bay smallmouth in the Championship Round of the final Bass Pro Tour event of 2020 in Wisconsin. He came pretty close, however, and he's a tour-level winner again for the first time since 2016.

He registered 110-05 on 38 scoreable fish (2 pounds or heavier) to hold off runner-up Mark Daniels Jr. by almost 8 pounds. Daniels made a hard charge in the closing minutes, but he had one good fish pull off and had to waste time battling and releasing a drum as the clock ticked away.

Daniels, the winner of the previous day's Knockout Round, finished with 102-07 on 34 catches as he and Lucas both topped the 100-pound mark for the second time in the event. Josh Bertrand finished a distant 3rd with 86-14 on 29 fish.

"I can't believe it," said Lucas, who finished 4th and 1st in the season's final two tournaments and qualified for next spring's Redcrest Championship after placing no better than 45th in any of the year's first three derbies. "It's been four years since I've won and you just don't know when you're going to win again. You come out here all the time and put in the 14-hour practice days ... this is just so cool. 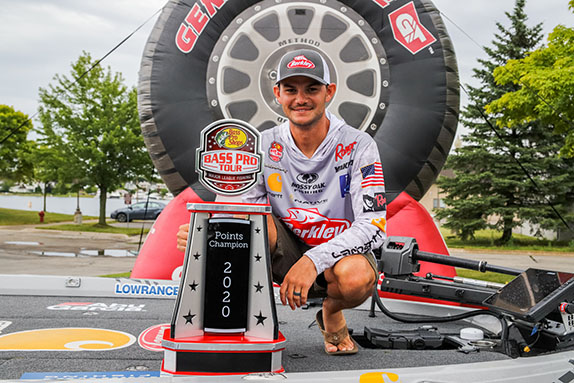 
Jordan Lee received the trophy for the points title that he'd clinched the day before.

"I'm not the best fisherman out here, but I'm so competitive and this feels really good."

It was Lucas' first triumph on a smallmouth fishery and his first on a non-tidal venue after winning on both coasts (the California Delta in 2015 and the Potomac River a year later) on the Bassmaster Elite Series. He took the lead with an 11-fish, 38-04 flurry in the final hour of the second 2 1/2-hour period and remained atop the ScoreTracker the rest of the way.

He fished isolated grass clumps on a big flat, pitching a dropshot-rigged Berkley MaxScent Flat Worm into 10 to 16 feet of water. He sealed the win with a short move with nine minutes remaining that immediately resulted in his final fish – a 3-03 specimen.

"I had the whole place to myself and I knew I'd found the winning fish in practice," he said. "I actually told my wife that and I'd never done that before.

"I had a lot of momentum and a lot of confidence from (the prior event). This is such a high-low sport and I'm one of the guys that can't stay high all the time. Maybe Jordan and Jacob (Wheeler) can, but the lows wear me down. I never want to give up or quit, I just want to come back and win." 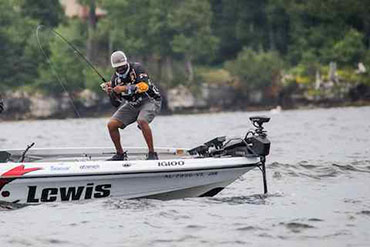 It was the second near miss of the season for Daniels, who finished 3rd at Lake Fork in March just prior to the pandemic-induced shutdown of the sport. He boated four fish that averaged nearly 3 pounds apiece during an eight-minute span at the end, but couldn't quite run down his fellow California-native-turned-Alabama-resident.

"I'm not upset by any means – I'm a fierce competitor and I want to win, but it wasn't my time," he said. "Congratulations to Justin; he put on a great show and absolutely smashed them.

"I would've liked to have won, but I had some missed opportunities and some major lulls and you can't afford those. But what an amazing fishery – I caught over 100 pounds two days in a row and there aren't many places in the country where you can do that. This place has got 'em!"