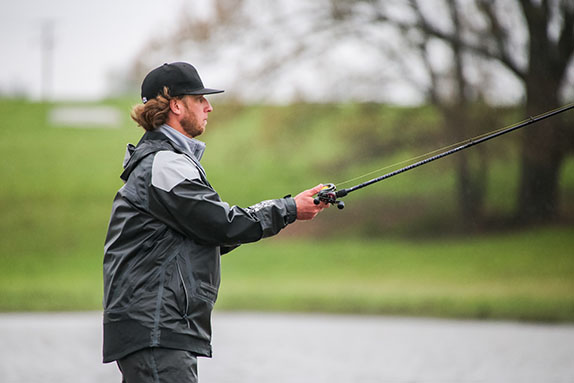 Fletcher Shryock will try to make up a 7-point deficit to Jordan Lee at the top of the Angler of the Year standings.

The much-altered 2020 Bass Pro Tour regular season will conclude this week and next with an event that was originally scheduled to take place in New York, but was moved out of that state due to its strict coronavirus restrictions. Instead of Lake Champlain, the 80 competitors will fish Sturgeon Bay in Wisconsin to decide the Angler of the Year and the 40 berths in both the 2021 Redcrest Championship and Heavy Hitters competitions.

The tournament will be the BPT's first on a smallmouth-dominated fishery. Located in the northwest portion of Lake Michigan, Sturgeon Bay is home to a prolific population of 2 1/2- to 5-pound bronzebacks and some that are a pound or two heavier. The tour is hitting it at a good time, too, as the region warmed up early this year and huge schools of fish have gathered in many places.

Wind is often a major issue for Great Lakes events, but that problem will be at least partially alleviated as the BPT will allow a trailered launch (competitors can put in at the ramp of their choosing). They won't be limited to the confines of the host bay, either, as everything from Green Bay north to Washington Island and the western side of the main lake will be in play.

The derby will also mark the return of Aaron Martens, who underwent two operations during the spring to remove cancerous tumors from his brain and recently completed a multi-week chemotherapy and radiation regimen. He missed last month's event at Florida's Kissimmee Chain of Lakes, but at No. 46 in the points, he still has a shot at qualifying for Redcrest and will have BassFans everywhere rooting for him.

Having not been cleared to drive, Martens will not be operating his own boat (except at low RPMs for the purpose of graphing). It'll be driven by Jodie Haralson, a BPT official with a medical background gained through military deployments.

Before diving deeper into the bite, here's some intel on the fishery:

Below is a view of Sturgeon Bay and the surrounding water, thanks to Navionics:

Jim Doering, who operates Cast N Catch Charters at Sturgeon Bay, has had some good days on the water with clients recently. He said a trip with two or three anglers usually results in 40 to 60 fish over a six-hour period and he had a day last week when the number went into triple digits.

"A lot of the smallmouth have pushed offshore and they're grouped up pretty good," he said. "These guys are the best in the world and it shouldn't take them long to find them. I think you're going to see some pretty big weights."

The water temperature at the surface is 75 to 80 degrees, which usually doesn't occur until August. Smallmouth are ganged up and feeding on isolated rock formations, primarily in 12 to 20 feet of water, and they haven't gotten as much fishing pressure as usual because of all the tournament cancellations due to the coronavirus.

Doering said there are rocky places that an angler can sit on and cast in a 360-degree arc for an hour and possibly catch several dozen fish.

"If you get a little wind pushing on it and some current, it's game on."

The venue hosted Bassmaster Elite Series events in 2012 and 2015 (the latter was an Angler of the Year Championship), but those took place entirely within the bay itself. Other options are available for this derby. 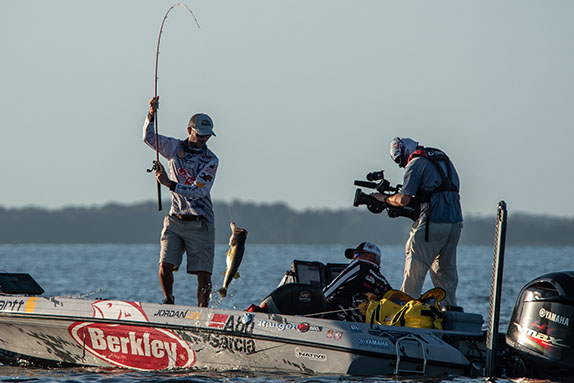 "That's one thing that's very interesting – that they get to fish the lake side of our peninsula. I haven't spent a lot of time there this year because the bay's been so good, but it's an untapped resource."

Fish can be caught a lot of different ways. Moving baits can be effective, but Doering's best action has come on the bottom with standard smallmouth fare such as tubes, Ned rigs and dropshots.

"They're getting it into their crushers and just choking it," he said. "The line jumps when they bite it."

Jordan Lee, the winner of the Kissimmee event, has a 276-269 edge over 2nd-place Fletcher Shryock at the top of the points standings. Lee, who placed 6th in the B.A.S.S. AOY Championship event five years ago, can lock up the crown with a finish of 7th or better.

Lee also sits atop the Heavy Hitters standings with 30-04 (the combined weight of his heaviest individual fish from each of the four BPT events this season). Andy Morgan (26-14), Takahiro Omori (26-12) and Neal (26-09) complete the top 4.

All six days of the event will be live-streamed on MLFNOW!, which can be accessed via the MLF website. Coverage will run from 8 a.m. to 4 p.m. daily.