Expansion Brings In Some Chickamauga Aces 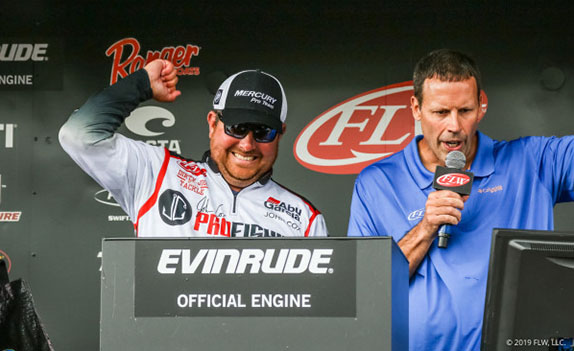 John Cox was a two-time winner at Lake Chickamauga in the spring of 2019.

Tennessee's Lake Chickamauga will be the site of the first FLW Pro Circuit Super Tournament his week as a total of 204 anglers (150 Pro Circuit regulars plus 54 Bass Pro Tour competitors), the largest field for a tour-level event in quite a few years, will jockey for position on Chick's famed offshore ledges. The drop-offs, limited in number for a lake of such size, will be crowded from the get-go and will stay that way until at least day 3, when about three-fourths of the field will have been eliminated.

It'll be a regular points event for the Pro Circuit roster – the fourth of six on a schedule that had to be revamped due to coronavirus restrictions. The addition of the BPT guys, who'll fish for only an enhanced prize purse and not for points, brings in a handful of names that are nearly synonymous with the lake.

Andy Morgan, Michael Neal and Wesley Strader all live near Chickamauga's shoreline and have spent much of their lives making casts for its big largemouth. Morgan won the BPT event at Chick in April 2019 and Neal owns a tackle shop at the tournament launch site.

Jacob Wheeler, a fixture at the top of the BassFan World Rankings for more than a year, relocated from Indiana several years ago and has spent a great deal of time learning the lake. He's also sizzling, with top-10 finishes in three of four BPT events this year (including a win at Lake Eufaula), plus a victory at the Pickwick Lake FLW Series.

Among the Pro Circuit field, the favorite has to be John Cox, the shallow-water specialist who won both an FLW Tour derby and a Bassmaster Eastern Open on the lake during the month after Morgan's triumph.

Boat draw will be an enormous factor when the event gets under way as competitors in the first flight will quickly cover the most productive offshore haunts. On the flip side, the shallower docks, grass and brush piles also harbor good fish – just not nearly as many in one place.

Thunderstorms are in the forecast for the first two days, which could also spice up the action closer to the banks.

"I can show you (depthfinder) pictures of schools all day long, but that might not mean much. I don't know if I'll be able to get on them or if I'll have to share them, or they might not bite. There's a lot of factors in this one."

Before diving deeper into the bite, here's some of the lowdown on the fishery.

Buddy Gross, the winner of the recent Bassmaster Elite Series event at Lake Eufaula, resides in Chickamauga, Ga. and his title sponsor is the tourism advocacy group Fish Lake Chickamauga. He says that crowding this week will be a major issue, but plenty of bags exceeding 20 pounds and a couple over 30 should be forthcoming.

Patience will be a big key.

"The guys who get on the good community holes the first day need to be still and don't panic," he said. "The fish are going to bite sometime during the day – everybody I know who's been fishing has been catching them. One curveball for this tournament is they're not fishing on a weekend and that's going to help.

"You're gonna have to watch out for the guys in the first flight because they can get on their stuff and catch a big bag the first day, then they'll be in the last flight on the second day and they can take advantage of the current in the afternoon."

He said that skinnier-water alternatives will definitely be viable. The bluegill spawn is happening and bass of the right size are taking advantage.

"The lake is so healthy and you can catch them any way you want to right now. Shallow is going to be an option, for sure. Some of those guys are going to crack them, but they're going to have to find new water every day."

Added Hays: "I've only been here a couple of times, but (the lake level is) not low or anything and there's definitely lots of stuff in the water. That should help spread things out a little bit. You can catch them both shallow and deep and there seems to be a good mix of people doing both.

"The guys who have those little sneaky places they can go to are going to have a big advantage. I saw Andy Morgan out on one of the giant flats where it looks like there's nothing out there and somebody who hasn't been here much doesn't know if there's brush or rock or a higher bottom or something else that doesn't show up on a map."

Anglers will take off at 6:30 a.m. EDT each day from Point Park at Dayton Boat Dock, located at 185 Chickamauga Drive in Dayton. Weigh-ins will also be held at Dayton Boat Dock and will begin at 3 p.m. To minimize the spread of COVID-19, attendance is limited to competing anglers and essential staff only.

The FLW Live on-the-water broadcast has been expanded to air on all four days of competition, featuring action from the boats of the tournament’s top pros each day. Host Travis Moran will be joined by former FLW Tour pro Todd Hollowell and MLF’s Marty Stone to break down the extended action each day from 8 a.m. to 2 p.m. EST. On-the-water broadcasts will be live-streamed on FLWFishing.com, the FLW YouTube channel and the FLW Facebook page.