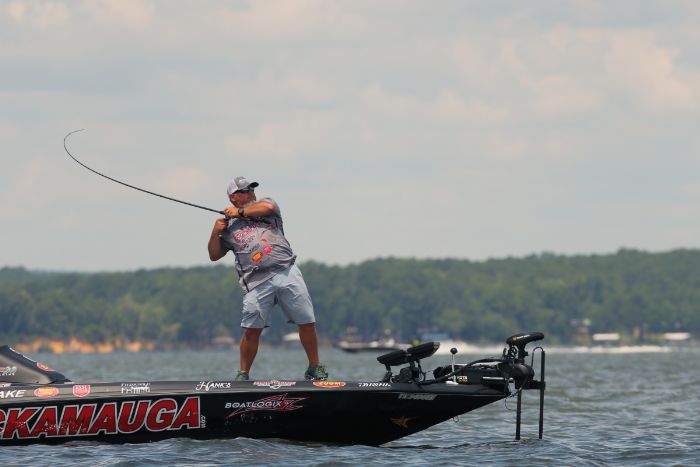 Buddy Gross leans into a hookset on Saturday during the final day of the Lake Eufaula Elite Series.

For the third time in the last six full-field tournaments spanning the last calendar year, the last angler to leave the dock on the final morning has been the last man standing on stage that afternoon.

Buddy Gross caught a tournament-best 27-11 Saturday to wipe out a 7 1/2-pound deficit and complete a 10th-to-1st rally, capturing his first Elite Series title with a four-day total of 84-08 at Lake Eufaula. Gross, who collected two FLW Tour victories prior to qualifying for the 2020 Elite Series via the Bassmaster Opens, caught the day’s biggest fish (6-13) and had another 6-plus pounder in his bag to overtake Scott Canterbury, who carried a 4-plus pound lead into day 4.

Canterbury, the reigning Elite Series Angler of the Year, sacked 19-03 – his first sub 20-pound bag of the week – and finished 2nd with 83-09, giving him a runner-up finish to go with a 6th-place showing from the St. Johns River back in February before the season the was interrupted for four months by the coronavirus pandemic.

It was an uphill climb all week for Gross, who was 43rd after day 1 and worked his way up to 19th with a 20-07 bag on Thursday. He added 19-08 Friday to move up to 10th. He was also the main beneficiary of Shane LeHew being penalized a total of 2-04 on day 3 for having a dead fish (4 ounces) and also making a cast with six fish in his livewell (2 pounds). Without the penalties, LeHew would’ve made the top 10 and Gross would’ve settled for a second straight 11th-place finish.

Last year, Jamie Hartman wiped out a deficit of 7-02 at Lake Guntersville to complete a 10th-to-1st rally. Micah Frazier pulled off the same feat at the St. Lawrence River two months later, erasing a 4-10 deficit. Back in 2013, Jason Christie won at Bull Shoals Lake after starting the final day in 11th place, 5-06 behind the leader.

“It feels amazing. I had no idea this was coming,” Gross said on stage, adding that he had the bites on day 1 to have a similar-sized stringer. “I thought I’d lost the tournament right there, but I just kept digging and fought my way back.” 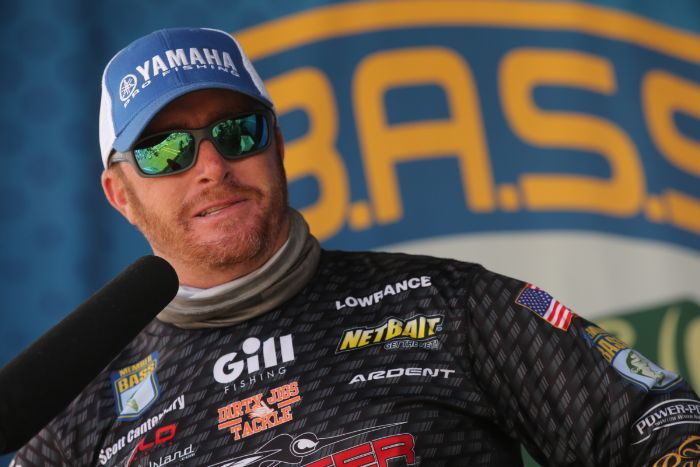 
Scott Canterbury slipped to 2nd on Saturday, but left Lake Eufaula with the points lead after two events.

Two key decisions seemed to fuel Gross to victory. While fishing brush piles on day 2, he made an errant cast and his line broke, sending his worm, hook and weight out into the depths. When he reached down for a different rod, he grabbed one with a jig tied on and he stuck with it the rest of the way.

“From that moment on, the whole game changed,” he said. “As soon as it’d hit a pile they’d eat it. I kind of kept it hidden so nobody else would make the switch, but that’s what won me this tournament – that jig.”

Today, after coming up empty at some deeper brush piles, he moved to some piles in shallower water – some as shallow as 5 feet – and began connecting with bigger fish. His two biggest fish of day 4 came out of the same brush pile at different times of the day.

“I made some decisions today that I don’t know where they came from, but they worked out,” Gross added.

Gross said having won three major tournaments at this juncture in his career is quite humbling, but this experience was truly unique.

“I want to be solidified as a veteran, but I’m still really green,” he said. “I’ve always wanted a blue trophy and now I got one, but I never thought it would happen this fast. It’s not just about the trophy, though. To come from where I came from, it just feels different than leading start to finish or being right there.”

Gross said the middle portion of the day, especially over the last two days, were incredibly important.

“It got really good from 11 to 1:30,” he said. “The last two days I really caught ‘em then. I knew I was going to catch fish today, but I didn’t know when or where and that’s a weird thing for me because I’m a spot guy. This was a different animal. This was a new experience for me.”

Canterbury did about everything he could do or hoped to do today, but ultimately had to tip his cap to Gross. While he came in with his lightest bag of the week, having a 4-pound cushion had him thinking he had some wiggle room. 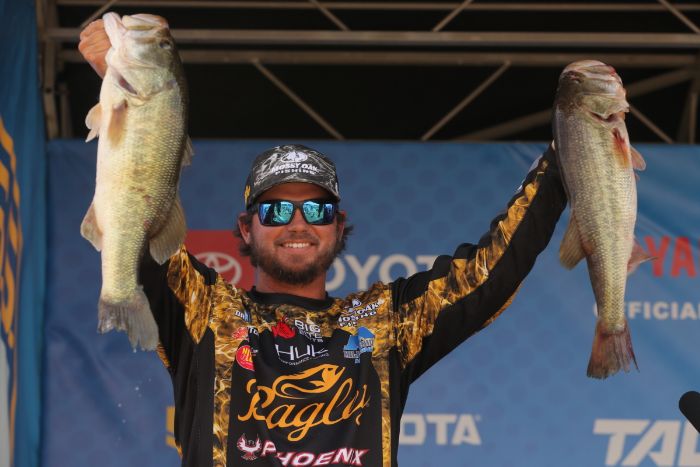 
Drew Benton overcame some bad luck on days 2 and 3 to salvage a 3rd-place finish at Eufaula.

“I didn’t lose this tournament,” Canterbury said. “Buddy won it. He blew it out. Of course, you want to win with a 4-pound lead and I figured 19 would win even though I said I needed 20, but my gosh, when he comes from 10th with almost 28 pounds it’s meant to be for him. It’s all good.

“If you ever tell me I can have a 2nd-place finish before the tournament I’ll take every one.”

Canterbury stuck to his brush pile game plan and caught a 3 1/2- and 4-pounder early on. The bigger bites eluded him the rest of the day, though.

“If anybody doesn’t think I left it all out there, I ran all I had and hit my best stuff twice,” he said. “I just didn’t catch any 5-pounders. I caught plenty of fish and was culling 3 1/4s. I didn’t lose any. I have no regrets.”

Benton was beset by mechanical issues and execution mishaps the last two days, so it felt good to have everything fall in his favor on day 4.

Brush piles also played a central role in his pattern, but after catching three keepers this morning, including a 6-pounder, he made a move to target bream beds. He picked off a 5-pounder with a frog, then went back to his brush rotation 90 minutes later.

He caught another 5-plus pounder out of the first pile he stopped at, then a 4-pounder before culling a few more times to eclipse the 24-pound mark.

“I caught nice ones, just no others to cull a 3-pounder,” he said. “Obviously, I’m a little disappointed, but considering what I went through (the last couple days) with how it all played out, I couldn’t have done any better today to give myself a chance. I was far enough behind where guys ahead of me had to struggle and I had to catch them. Buddy deserved to win it, though, no doubt about it.”