BPT Returns With An Emphasis On Big Bites 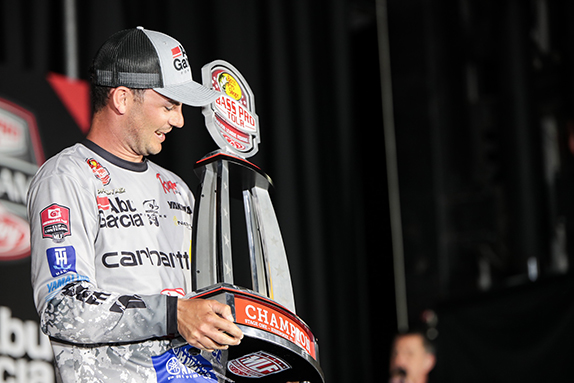 A tournament that was originally scheduled to take place two weeks ago with only 30 competitors has been reshaped into a full-field Bass Pro Tour event with a lot of extra money up for grabs. The inaugural Heavy Hitters, which starts its six-day run on Florida's Kissimmee Chain of Lakes on Sunday, will end the BPT's three-month hiatus necessitated by the coronavirus pandemic and will handsomely reward anglers who wrangle up the system's biggest fish.

The angler who catches the largest bass in Friday's Championship Round will earn $100,000 in addition to whatever he earns for final placement in the field (possibly another $100,000). A $50,000 bonus will be on the line during the preceding day's Knockout Round and an extra $25,000 will go to the competitors with the heaviest catches during the Group A and B qualifying rounds that will be contested alternately over the first four days.

It'll take a legitimate bruiser to garner any of that extra loot û the system is home to a lot of them and they're biting pretty well as the calendar moves into summertime. Five-fish stringers in excess of 25 pounds have been required to win local derbies and individual specimens registering 8 pounds or more have shown up frequently.

The tournament is the second-to-last on the revised BPT schedule, which means that points will also be at a premium for anglers attempting to qualify for the year's final Major League Fishing Cup event and next spring's REDCREST Championship. Competitors will have access to all six lakes in the chain and there's some variety among them in terms of water clarity, available cover and other environmental conditions.

The weather forecast is a bit ominous, as there's a high probability of thunderstorms during each competition day. The time of day that the storms roll in, along with their intensity and duration, will be significant factors.

The field will consist of 79 competitors, as Aaron Martens will miss the event. Martens underwent two operations in recent months to remove cancerous tumors from his brain and is a little more than halfway through a chemotherapy and radiation treatment regimen that's scheduled to conclude in July.

The entire field will be paid for this event. That includes Martens, who'll receive a $4,000 check (the same as the 41st- through 79th-place finishers) as the result of a vote by his fellow anglers.

Before getting into more about the bite, here's some intel on the fishery itself.

Here's a view of how the Kissimmee Chain lays out, courtesy of Navionics:


Back to Where it Began

The Kissimmee Chain was the sight of the inaugural BPT event in February 2019. Jordan Lee won with a 55-01 haul in the Championship Round, which was contested at tiny Lake Garcia. He outdistanced runner-up Edwin Evers by nearly 11 pounds.

JayTurner, who operates Jay's Bass Bustin' Guide Service, says he expects this year's derby to be won in Lake Toho.

"That's where most everything's been won for the last two months, down on the south end of the lake in the open-water hydrilla," he said. "The way hydrilla is, it sets up different every year and that's where it's the best right now. It's where most people are concentrating on, but you can still catch fish across the whole chain."

He said the water in Kissimmee and Cypress is significantly dirtier than it is in Toho, possibly because they're currently lacking abundant hydrilla, which acts as a filter. Strong recent winds spraying of aquatic vegetation also could be playing a role in that phenomenon.

He expects rattlebaits and bladed jigs to be among the top producers for fish sitting in depths 1 to 10 feet (the latter is considered extremely deep for Toho). Carolina rigs, crankbaits and finesse-style worms will be options, along with standard flipping fare.

"We've been having a lot of rain, so current could play a big factor. Guys trying to catch numbers, if they get on the right spot they can catch 20 2-pound fish. They can catch a bunch shallow, too, if the water starts rising up.

"It can be funky (in Florida) after the spawn because you can't pinpoint exactly where the fish will be. They don't all go to the same spots like they do in some other places."

> Bobby Lane û Stunningly, he zeroed in the previous 2020 event in his home state at Lake Okeechobee. There's a good chance he'll make amends at this one.

> Edwin Evers û At 29th in the points, he's not have the same type of year he had in 2019, but his track record in Florida is long and strong.

> Brent Chapman û He bombed at the Kissimmee Chain in 2019 (72nd), but this is a different time of year and he comes in with a lot of momentum. He also has some good history on the venue û a 3rd-place finish in a Bassmaster Elite Series event in September 2007.

> Jacob Powroznik û The winner of the Okeechobee event in February has eight top-25 finishes in his 10 BPT outings and his shallow-water prowess makes him a constant threat in Florida.

Live-streamed coverage will run from 7 a.m. to 4 p.m. EST each day on MLFNOW! at www.MajorLeagueFishing.com, the Major League Fishing app or MyOutdoorTV (MOTV).