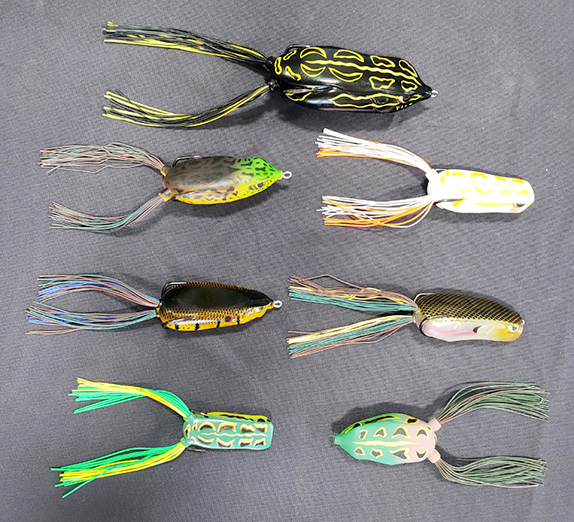 The hollow-body topwater frog market aimed at bass anglers was virtually non-existent in the mid 2000s. Aside from what Scum Frog, Snagproof and Boze, a Japanese company, offered, options were quite limited. It was barely a niche in the tackle industry.

Now, it’s a full-blown segment with broad representation across countless lure manufacturers believing that a hollow-body frog – some with multiple models – is must-have as part of their product line.

All because of the SPRO Bronzeye Frog, which is celebrating its 15th birthday this month. Frog fishing certainly has seen its profile elevated over the last decade and a half and that can be partially attributed to longtime pro Dean Rojas and his use of the Bronzeye in scenarios that previously weren’t even considered feasible options for that style of bait. Some rod companies now make models designed specifically for frog fishing. Same with line companies.

Typically, frogs were used to fish mats and lily pads, vegetation-rich areas where frogs would naturally live. Rojas introduced the fishing world to the art of skipping a frog into and under thick, overhanging shoreline cover and employing it in open-water situations.

“Dean was the first guy to take it and use it in open water and around bushes – places it wasn’t initially intended to be used,” said fellow pro and noted frogger Ish Monroe. “He took it to a level nobody ever saw it going to.”

SPRO has sold more than 3 million Bronzeye Frogs since its introduction in 2005, making it the brand’s top-selling bass lure.

“The Bronzeye frog is a keystone product for us,” said Syd Rives, SPRO’s national sales manager. “Having a product be as successful as it’s been has opened many doors for our brand and contributed to a lot of the success that you see from SPRO today. It’s always the first thing that people talk about when I mention that I work at SPRO.”

It’s also the first thing many BassFans associate Rojas with. Signature series baits have been around for a while, but few pro anglers are linked to a particular bait made by a particular company in the way Rojas is to the SPRO Bronzeye Frog. He’s had a hand in its development, launch, growth and lasting popularity.

“I wanted to be known for something different and I’ve totally embraced it,” Rojas said.

The Bronzeye family now includes seven different versions of soft-body frogs and eventually paved the way for SPRO to branch out further and develop other lures (all hard baits) with significant input from pro anglers.


This worksheet, dated Dec. 17, 2004, depicted the first prototype design of the Bronzeye Frog.

The launch of the Bronzeye Frog came during the ESPN ownership era of B.A.S.S. and Rojas was a tireless promoter in and out of competition.

“People said, “You’re wasting your time. The market is not that big,’” recalled Michael Murphy, who served as the assistant national sales manager at SPRO during the 2004-05 timeframe and helped Rojas fine-tune the prototypes prior to settling on a final version. “We didn’t go after that market. We created our own market. Dean taught people how to fish it nationally and everything lined up just right.

“Dean was the right person at the right time,” Murphy added. “He was fishing two trails. Everybody loved him. He got press everywhere.”

“He knew I wanted to be a pro angler and he was the first boater I was paired with in the bass club when I was 18,” Rojas recalled.

Cassidy was a good promoter, Rojas said, and one day some representatives from Japanese hook maker Gamakatsu were scheduled to stop by Cassidy’s tackle store. Rojas made sure he was there at the same time and mingled with the Gamakatsu folks. The interaction led to a sponsorship from the hook company. During that time, Rojas appeared on the cover of Bassmaster magazine while wearing a Gamakatsu hat, a sizable coup at the time.

Eventually, Gamakatsu and Rojas parted ways only to link back up several years later. In 1997, SPRO was launched as a sister company to Gamakatsu and its initial product line consisted of swivels and bucktail jigs, using Gamakatsu hooks naturally.

Kentaro Hara, whom Rojas knew from his association with Gamakatsu, served as the president of SPRO. Rojas’ initial outreach for a sponsorship deal was turned down. After Tim Norman was hired as the general manager, Rojas made another pitch for a sponsorship support and Norman warmed to the idea.

The 2004 Bassmaster Classic at Lake Wylie will be forever remembered as the Classic where Takahiro Omori staged a late-day rally with a crankbait on day 3 to become the first foreign-born Classic winner. Rojas maintains the tournament might’ve gone his way had the hookup ratio with the frog he was using been better.

Rojas had used the Boze Sumo frog for a couple years and also threw it at the ’04 Classic. He said Boze called him on the night of day 2 of the Classic that year and offered him an attractive endorsement deal, but he turned it down because he was curious to see what SPRO’s plans were.

“I told (Boze) their frog is good, but they weren’t open to any suggestions in terms of changes,” Rojas said.

Immediately after the Classic, Norman brought Rojas on as a pro staffer and gave him carte blanche to design a frog to his specs. It wouldn’t mimic the other frogs on the market, though. Rojas knew the hook he wanted to incorporate, which meant the body would be designed to the fit the hook, a totally opposite concept compared to other models at the time.

“Tim gave me a blank sheet and said we wouldn’t launch it until I say it’s right,” Rojas said. “He said they would use all of their resources to build the best bait.” 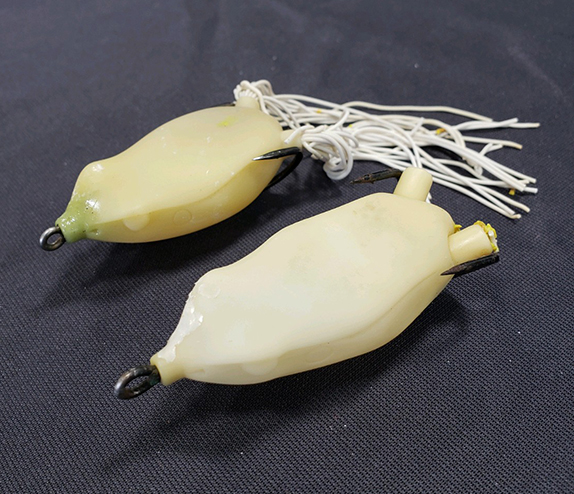 
Rojas still has the first two Bronzeye prototypes, one in the 65 size, the other in the 60.

To build a frog bait from the ground up, er, the hook out was an involved process, but Rojas knew a few of the key features he wanted the finished product to have.

First, the hookup ratio needed to be significantly better than the other frogs on the market. To achieve that, a softer yet still durable body material was used. In addition, where the hook point was in relation to the body was a top priority, as was the weight balance and the strands that serve as the legs.

“The main thing was the compression of the body and making sure the hook points could get to work as soon as a fish clamped down.”

As for the hook, Murphy described it as a double tuna hook that started with an O’Shaughnessy bend. For the Bronzeye 65, the first frog produced in the line, the hooks featured an extra-wide gap bend, something that took several months to get right.

“I remember the factory saying something to the effect of, ‘Good luck with that,’” Murphy said.

Rojas said he reached out to Alfred Williams, a two-time Bassmaster Classic qualifier and frog fishing pioneer, for his thoughts on where to position the nubs, which would serve as the collars for the rubber strands. Rojas also successfully lobbied to fuse closed the line tie that would ultimately connect to the double hook.

“The frog stereotype was always about the low hookup ratio,” Rojas said. “People would say, ‘Why should I throw it if I’m just going to lose ‘em?’ I had to defeat that stigma.”

The design process started right after the Classic at Wylie and lasted through the winter and into the spring of 2005. At the Lake Okeechobee FLW Tour in January 2005, where Rojas finished 3rd, he had the first two prototypes (both white).

“It was really close,” he said. “It walked good. It floated good. It was weedless and soft. It was everything I wanted, but it wasn’t totally right yet.” 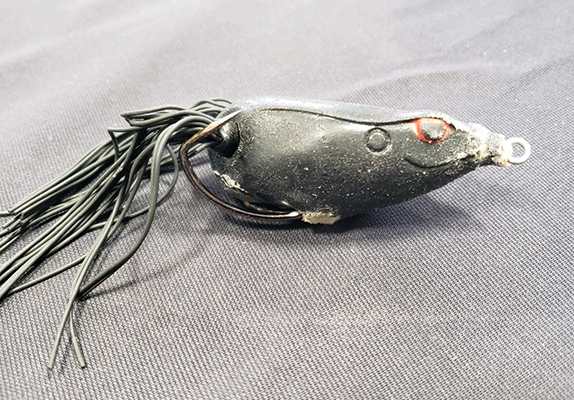 
This model of the Bronzeye 65 was part of the second batch of prototypes. Note the clumps of dried glue near the line tie that Rojas had to apply to extend the life of the bait during the testing phase.

A few strands were removed from the legs to “make it dance more,” Rojas said. Additional tweaks were made over the next couple of months and with ICAST approaching, Norman began pushing to unveil it at the show that summer.

“We did everything we could do to slicken the frog and peel the top layer to encourage a hookset,” Murphy said. “We were trying to build a perfect frog.”

Rojas was willing to wait until everything was as he wanted. Finally, it arrived. A batch of six were delivered to him to test at the Lake Dardanelle Bassmaster E50 in May 2005 and he caught the big bass (7-00) on day 1 with one of the prototypes.

“Nobody was throwing (a frog),” he recalled.

But each night he had to perform reconstructive surgery on some of them to make them fishable for the next day.

“They’d tear and the weights would fall out,” he said. “The shape and action were right, though. It just needed to be buttoned up.”

Rojas wound up 12th at Dardanelle, but the buzz had already started to build.

“People had already seen it on TV and that was huge,” he said. “It was a perfect storm because at the time it was a new technique the way I was fishing it. Plus, I was having success with it and there was nothing else on the market like it. All of the ESPN coverage and topwater blowups, that was all fresh and fed the frenzy.”

Then it came time to choose a name for it. Originally, the SPRO frog was called Congo, but Hara preferred Bronzeye because one of the prototypes had what appeared to be a bronze eye.

“That was Kentaro’s thing,” Rojas said. “I had final say on everything from the way it looked to packaging. That was only thing he got a say in.”

Murphy recalled the scene surrounding the best of show announcements at ICAST in 2005. He said it was a semi-formal event with a mix of media members and independent dealers serving as judges.

“The Best of Show deal was very significant,” Murphy said, “It meant a lot back then.”

The dealers who served as judges also had access to vote totals and would then direct their new order placements accordingly. When the Bronzeye 65 won best new soft plastic bait, the orders poured in – and seemingly haven't stopped since.

The Bronzeye 65 became available to consumers in the fall of 2005. Initially, seven colors were offered. Currently, the Bronzeye 65 comes in 41 different color patterns.