BACK
At This Time: May 8

Setting The Stage For AOY Showdown At Eufaula 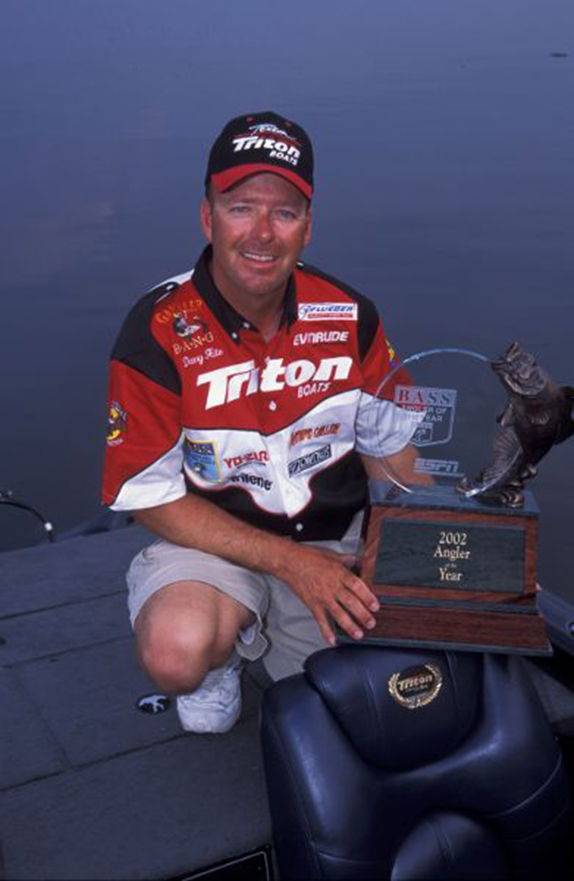 Davy Hite shows off the 2002 Angler of the Year award he won after holding off a pack of challengers that included Kevin VanDam, Larry Nixon and Mark Davis.

It sounds weird to talk about the conclusion of the Angler of the Year race occurring at a tournament in May, but that’s how schedules were structured back in the early 2000s.

With the Bassmaster Classic still a summertime event, the following season’s schedule often started in the weeks following after the Classic and extended into the following spring.

And the culmination of the Bassmaster Tour in 2002 saw five superstars vying for the AOY crown with Davy Hite, Larry Nixon, Mark Davis, Kevin VanDam and Tim Horton separated by just 24 points entering the season finale at Lake Eufaula along the Alabama-Georgia border.

BassFan handicapped the race in advance of the competition getting started at Eufaula. Hite, with two wins under his belt that season, was the frontrunner. Nixon, meanwhile, was aiming to set a record for longest span between AOY titles (he won the 1982 B.A.S.S. AOY title). Davis, VanDam and Horton all had AOY crowns to their credit, so it would’ve been foolish to write any of them off.

Spoiler alert: Hite went on to finish third in the tournament to sew up the AOY title.

Here’s a rundown of some other news we’ve covered over the years that we published May 8. Check back next Friday for another batch of archival content.

A year ago at this time, the tournament season was humming along. The Bass Pro Tour was in the midst of its debut season and Dean Rojas had just put the finishing touches on his victory at Smith Lake.

Consistency was the fuel that drove the Arizona pro to the top of the ScoreTracker by the end of the final day.

By and large, he mixed shallow- and deep-water strategies to generate bites through each day. He targeted bass keying on spawning shad in the mornings before mining deeper points and shoals to catch post-spawn spotted bass.

For pro anglers, confidence can come and go from day to day or tournament to tournament. That’s why it’s important to have a bait or a few baits that seem to be more reliable and productive than others.

“It’s a subtle presentation that I can cover a lot of water with at a lot of different depths,” he said. ‘A lot of times at lakes that are pressured, it’s a bait they might not have seen a lot of. It has a natural presentation in the water. That combo sets it apart. ”

The conditions for the Ross Barnett Reservoir Elite Series in 2017 demanded versatility and constant adjustments, especially among those who finished just behind tournament winner Dustin Connell.

Kevin VanDam, for instance, utilized a half-dozen techniques en route to a runner-up finish. His nephew, Jonathon, targeted the same 6- to 7-foot depths and relied on a jerkbait and a vibrating jig.

A swim jig and frog were the main players for Bobby Lane while Mark Menendez focused on a shad spawn before flipping docks later in the day.

It took several days and plenty of patience, but Stetson Blaylock was able to regain control of his Facebook page after it had been hacked the week before.

Blaylock posted a video announcing the breakthrough after someone had made 238 posts to his Stetson Blaylock Fishing page.

After a windy day 1, Clifford Pirch shot into the lead on day 2 at the Lake Havasu Bassmaster Elite Series with a 19-04 bag that gave him 36-12 at the halfway point.

The key to Pirch’s day was pulling the plug on his starting area, which saw a considerable uptick in fishing pressure compared to day 1.

"I finally just left because it got so dang crowded," he said. "I went somewhere else and fortunately I ran into a couple of good ones."

While Pirch escaped the crowds, John Murray welcomed them as he moved into 2nd with a 16-01 effort.

Behind a 28-06 stringer, Davy Hite moved into the lead after day 3 of the Lake Guntersville Elite Series.

He carried a 5-pound advantage over Skeet Reese into the final day, thanks to a 7-14 kicker that anchored his tournament-best bag. Unfortunately for Hite, Reese rebounded on day 4 with a 25-15 bag to win going away – his second victory in the span of three weeks.

"It's not entertaining to see two grown men preparing to do battle with a net that holds a 2-pound bass. That's bull."

Those are the words of Ray Scott, the father of modern bass fishing. Scott was never shy about his desire to introduce more drama or potential drama to the sport, especially for the television audience. When he was the head of B.A.S.S., he prohibited the use of nets and later criticized the organization for allowing their use since FLW permitted nets at the time (and still does).

Scott’s contention was that the use of nets did more harm to the fish than hand-landing.

"Hand-landing fish is 10-times better for the fish than using a net,” he said. “A net splits fins, breaks spines and knocks off more slime than if you bounce them on the deck. When a fish is wallowing in that net, regardless of the material it's made of, he's knocking off slime.

"I don't think that will kill a bass," he added. "Bass are a heck of a lot tougher than we give them credit for."