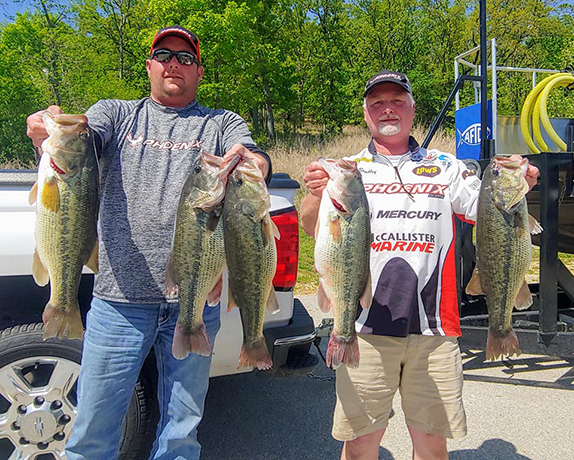 Terry Bradley (left) and Matt Gunter hauled in nearly 23 pounds at Lake of the Ozarks on Sunday to win the Anglers In Action tournament there.

With Bassmaster, FLW and Major League Fishing tournaments on hold until further notice due to the coronavirus, the bass fishing tournament universe has felt quite empty in recent weeks.

Signs of life started to emerge in Missouri last weekend, though.

Midwest Fish Tournaments, which operates the Anglers In Action tournament trail, went ahead with its regularly scheduled May 3 team event at Lake of the Ozarks and the turnout was an eye-popping 169 boats. By comparison, the tournament held at LOTO in early May last year attracted 112 boats.

It was the first Anglers in Action tournament since March 15 at Lake of the Ozarks after the trail had cancelled three other tournaments in April. A Big Bass Bash event that was scheduled for March 21-22 at Lake Pickwick was also cancelled.

“It was a near record turnout and I think it’s because people are itching to get out and fish against good competition,” said Al McCulloch, who serves as the tournament emcee and was part of the team that helped implement changes to how the tournament would operate so the event would satisfy guidelines put in place by the state of Missouri and local health officials.

“From planning to execution, it pretty much went flawless,” said Charlie Terrell, co-owner of Midwest Fish Tournaments and tournament director for Anglers in Action events.

Anglers did have to adjust to some procedural changes, but nothing was too extreme. Terrell was in communication with the Water Patrol Division of the Missouri State Highway Patrol as well as the Camden County Health Department and Missouri State Parks in order to understand the social distancing guidelines the tournament needed to operate within and to come up with a plan for a safe and smooth launch procedure and weigh-in process while limiting people gathering.

Participants were encouraged to register online rather than wait until the morning of the tournament, when anglers would be standing close together in a line waiting to pay their entry fees. McCulloch estimated about 80 percent of the field utilized the online registration system.

The most significant change was to the weigh-in procedure. Rather than have both members of each team stand at crowded tubs with their fish in a bag waiting to go on stage, Terrell opted to go with a drive-through weigh-in, a first for his circuit. One angler retrieved the truck and once the boat was trailered, he drove it to the weigh-in site while the other angler remained in the boat. Weigh-in bags were supplied to each team and Terrell then hauled them from each boat to the scale. No crowd was allowed to assemble at the weigh-in site.

Terrell admitted he was concerned about the logistics of doing a drive-through weigh-in and making sure too many trucks didn’t sit idling in line for too long with captive fish still in each boat’s livewell.

“With that many boats, I was worried about a backup at the weigh-in,” he said. “We never got backed up more than 16 rigs and we kept it moving pretty smoothly.”

Face coverings were made available to tournament staff, but it was not a requirement they be worn.

“Therapy-wise, guys wanted to get back out there and fish the trail and see their buddies,” McCulloch added. “People have been locked down for more than a month.”

The team of Terry Bradley and Matt Gunter caught 22.78 pounds to win the event and claim more than $13,000 in cash winnings.

“In my opinion, we should’ve been fishing tournaments just like this,” Watson said. “I’ve fished with Casey several times in the past few weeks. I had no trepidation or worries and haven’t had any for weeks. With those guidelines in place, we were as safe as we could be. I’m just as liable to get sick if I go to Walmart or a grocery store, so why not be having fishing tournaments.”

Watson said the operational changes weren’t disruptive at all.

“I was in the truck, Casey stayed in the boat,” Watson said. “He never stepped out of the boat. Casey handed the bag to the tournament official, they weighed it and then handed it to somebody to take it to the release boat. At no time other than handing my bag to that person did I get within 6 or 8 feet of anybody other than when I was netting Casey’s bass.”

Terrell said being able to see how a Plan B can be executed gives him hope that future tournaments can operate smoothly in the coronavirus era. He was slated to get a response from the Grand River Dam Authority late Wednesday as to the status of the May 16 Anglers in Action tournament planned for Grand Lake.

“Everything went great,” Terrell said. “We definitely had our concerns going into it with this being a trial run.”