BACK
Bait Builder, Too

At 25, Wall Has Built Solid Foundation For Himself 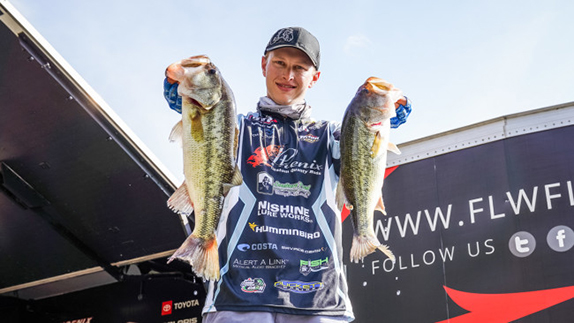 Jacob Wall had collected two straight top-15 finishes on the FLW Pro Circuit prior to the season being put on hold.

It didn’t take Jacob Wall long to achieve some of the goals he set for himself on the FLW Pro Circuit in 2020.

Coming into his second season on the circuit, Wall wanted to build on a rookie year that included one top-30 finish (Lake Seminole), three money finishes and a 55th-place showing in the Angler of the Year points. It was a highly respectable outcome for someone who had just moved to Alabama from southern Oregon largely to pursue a career as a tournament pro.

For 2020, he set a loose framework of goals that included multiple top-30 finishes and to earn more paychecks than he did as a rookie. Through three events, he’s notched two top-15s and banked a check in all three outings. It’s safe to say he was quite satisfied with how the season got rolling before competition was put on an indefinite hold due to the COVID-19 pandemic.

“After three events, to say I made not just two top-30s but two almost top-10s, I’m happy with where I’m sitting in points,” said Wall, who’s perched in 7th place in the current AOY chase. “To have a shot at the AOY would be amazing. It’s a lofty goal, but something we all strive for.”

Over the first 10 events of his career at the Tour/Pro Circuit level, the 25-year-old Wall has hauled a limit to the scales on 20 of them. That’s a solid ratio (87 percent) for an angler who is still getting settled into the life a resident of the Southeast. Wall and his girlfriend moved from southern Oregon prior to the 2019 FLW Tour season after Wall qualified via the FLW Series Western Division in 2018.

Wall competed in his first tournament as a 12-year-old and continued to fish competitively through high school (he finished 2nd in the 2012 FLW High School Championship). While attending the University of Oregon, Wall was a member of the school’s bass fishing team and after graduating with a degree in product design and fine art, he made the call to try to pursue a career in fishing.

“I wanted to fish the Costa Series and I came up with the means to do so,” he said. “I was just trying to gain some experience and I didn’t think anything about qualifying (for the Tour).”

He wound up 8th in points and earned a spot in the 2019 Tour field. It also earned him a spot in that year’s FLW Series Championship at Lake Guntersville, which then prompted his move to New Hope, Ala.

“It was 100 percent a fishing decision,” he said. “I wanted to be more centrally located and decrease my travel time. With the championship being at Guntersville that year, I used that as an opportunity to look around the area and it became my number one choice.”

While Wall currently has a love-hate relationship with Guntersville as he continues to learn the nuances of his new home lake, he said his 12th-place finish at the Harris Chain back in February was due in part to some grass-fishing concepts he has picked up fishing the TVA reservoir.

“I pre-practiced at Harris and spent a lot of time offshore idling, trying to locate those subtleties and differences in the grass, knowing it likely wouldn’t change a whole lot by the time the tournament started,” he said. “The stuff I do at Guntersville was relatable even though I was fishing shallower at Harris.”

Rather than get caught up in a run-and-gun strategy, Wall was well-served by his decision to stay put in Lake Griffin, where he hauled the majority of his weight off of one particular area.

“I found one good spot there offshore and unknowingly it just happened to pan out,” he said. “I had no idea a school that big was there.” 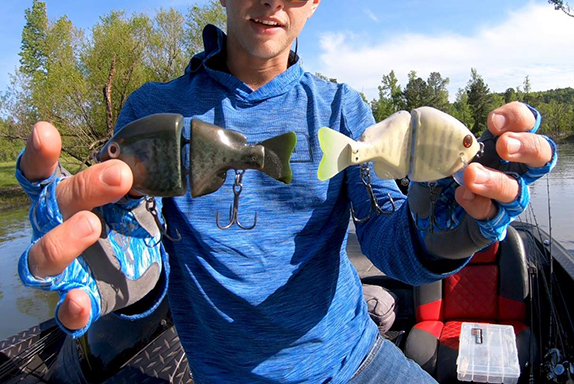 
Wall shows off a couple of the jointed swimbaits he carved and painted himself.

While Wall found similarities between Guntersville and the Harris Chain for one of his best showings, his other superb finish at Lake Martin came as a result of what he’d learned at Lake Shasta in California, where he’d fished frequently growing up and in college. During a scouting trip to Martin before it went off limits, he immediately noted how similar it felt to Shasta.

“At first, I was excited about it because I figured I knew how those spotted bass act and set up,” he said. “Then practice came around and I was running around, hitting brush piles for pre- and post-spawn stuff. I just wasn’t feeling it. I’d catch a decent one, but then I’d catch a bunch of dinks. That also reminded me of Shasta because I’ve done well there, but I’ve also had some awful days where you can’t catch anything bigger than 1 to 1 1/4 pounds.”

He scrapped the spotted bass plan and pivoted to hunting largemouth in shallow pockets while slinging spinnerbaits and buzzbaits. Eventually, he slowed down in the tournament and switched to a wacky-rigged worm and a jig as the fish had started to lock down on beds.

“It was a good decision for me even though I didn’t catch the numbers that other guys were,” he added.

It was a decision fueled by his willingness to follow his intuition on the water, something even veteran anglers still grapple with.

“I’m trusting gut feelings more, like if something’s telling me to go run around this corner and check this spot where I got a bite, I’ll go do it,” he said. “At Martin, I made decisions to run to spots where I’d gotten a fish to bite. Martin was all about making that call when to run. At Harris, my gut was telling me to stay and work that spot all day, so I just sat there and worked it for all it was worth.”

With the tournament season on hold for the time being, Wall has had more time to devote to his “side gig” – hand-carving swimbaits and custom painting them.

He’s currently working on a batch of 20 jointed swimbaits, all of which are spoken for. He’ll put in a few hours each day on them, knowing it’s a tedious process. He’s also started to dabble in resin baits, which require making a silicone mold.

“It’s time-consuming as heck,” he added. “Carving them out of wood is enjoyable, but it takes a lot of time and it’s a lot of meticulous handwork to shape them and get the weighting right and adding the polycarbonate lip.”