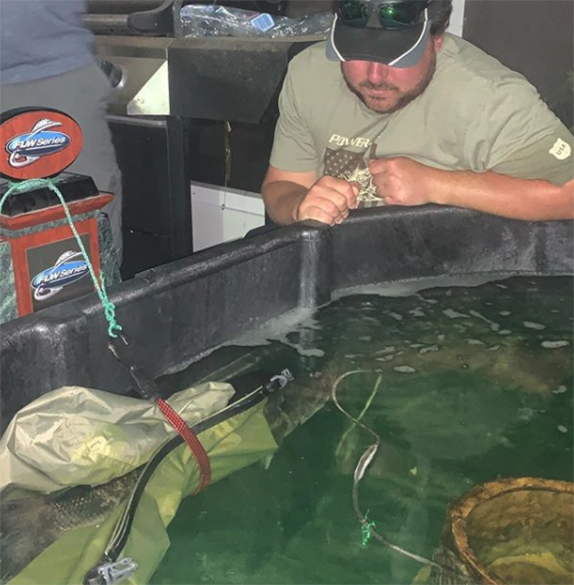 John Cox looks after an injured bass being kept in a tub at this house in Florida this week.

What was supposed to be a fun bowfishing trip for tilapia on the St. Johns River last Sunday turned into a rescue mission for John Cox and pal Keith Carson.

The two were set to be featured in a livestream on the social media channels for boat company Crestliner when they came upon a big bass that was in clear need of assistance.

“We were seeing a lot of bass and it looked as though they were starting to spawn again,” said Cox, who is competing on the Bassmaster Elite Series and FLW Pro Circuit in 2020. “Then we ran into this fish that looked like a zombie bass. It was blind in both eyes and had a big chunk out of its back.”

The gash was deep and grisly, the result of a possible encounter with an alligator or an outboard prop, Cox presumed. The bass swam slowly over to the trolling motor and Cox was able to lift it into the boat and place it in the livewell.

“We hurried back to the house,” he said, “because it looked like it was going to die.”

Carson immediately named the bass “Walter.” Over the next 2 1/2 days, Cox and Carson documented the around-the-clock care and efforts aimed at nursing Walter back to health. It wasn’t long before the hashtag #SaveWalter2020 was making the rounds on bass fishing social media. Cox and Carson both envisioned a day when a healed-up Walter would be released into the pond behind Cox’s house to live out his days.

Once back at Cox’s house Sunday, Walter was placed into a bathtub full of water. Cox installed a portable aerator and mixed in a solution that’s used to keep shiners alive and reduce bacteria. Noting Walter’s tendency to roll to one side, Cox created a sling out of a gear bag, using an FLW trophy as a stabilizer, and was able to keep Walter upright overnight.

“The next morning, we let him out and he was moving good,” Cox said. “The wound started to look okay.”

Sensing Walter’s recovery could be a long-term commitment, Cox went to a local farm supply store Monday and purchased a large tub, similar to ones tournament circuits use for anglers waiting to weigh their fish. He also bought a recirculation pump and an artificial tree stump to “make Walter feel at home.”

“I’ve been keeping fish and shiners alive since I was a kid,” Cox said. “I knew he needed to stay upright. We even tried those fin clips, but on such a big fish in a shallow tub they didn’t work that well. The sling setup worked great.

“When we found him I figured there was no way he’d survive. (After that first night), I thought he was going to make it. He looked so good.”

After Walter was transferred to his new 300-gallon rehab tank, Carson was able to hand feed him a small piece of bologna, adding to their optimism.

“Right before we went to bed, he started to tilt on his side again,” Cox said. “It looked like he was getting tired.”

Walter was placed back in the sling contraption overnight and on Tuesday morning he seemed to be moving well again. Things took a turn for the worse, however, after Walter was freed from the sling. Cox said he seemed to tire out quickly, then he stiffened up and died.

“It was the worst thing ever,” said Cox, who said he spent a good portion of his stimulus check trying to help Walter heal. “The fish had to be pretty old. He was blind in both eyes. I think that wound was so deep that maybe it paralyzed his tail. Keith giving him a name as soon as we saw him made it worse when he died.”

Here is a tribute to Walter posted to Cox's Instagram page on Wednesday.

😢 Walter went to God’s stocked ponds in Heaven today. Thank all you guys for all the prayers, messages, comments, and shares. He weighed 10lb 15oz @keith_carsonn #savewalter2020 #ripwalter

“It was difficult,” Carson added. “Any time a 10-pounder dies it sucks because those big fish reproduce and make other big ones. It was quite an experience. It sucked to see it go, but it had some pretty intense wounds.”

Cox took Walter to a local taxidermy shop Tuesday and plans to have a mount made. The fish measured roughly 29 inches long and weighed 10 pounds, 15 ounces. Deciding what the name plate would say was easy: “#SaveWalter2020.”

On Wednesday, Cox and Carson went fishing at Lake Toho, but Carson admitted it was hard to shake the memory of Walter.

“It was an experience,” he said. “I’m already wondering when we’re going to find the next one. I was looking for fish swimming under the surface at Toho.”