BACK
At This Time: April 24

Paging Through The Archives 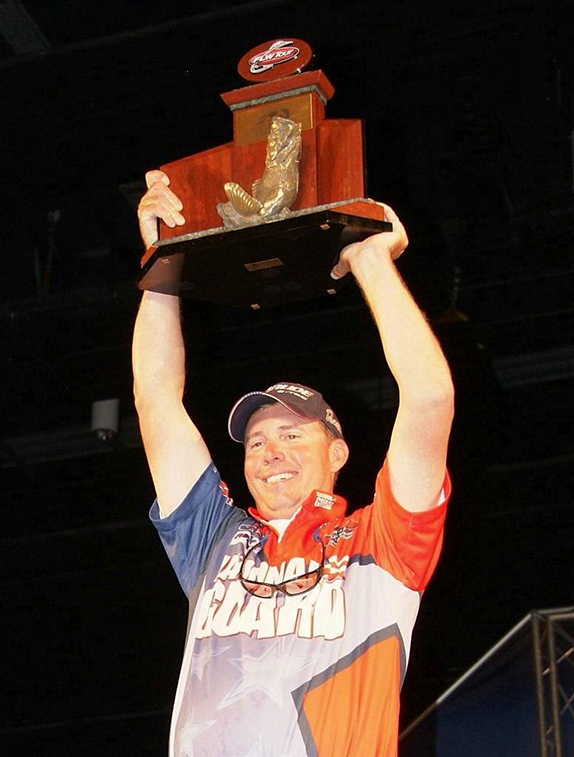 Being stuck at home due to the coronavirus pandemic has lots of folks pining for the way things used to be.

Sports fans who would normally be knee deep in the NHL and NBA playoffs or readouts from college football spring games have had to settle for watching the scaled-down version of the NFL Draft or vintage games or NASCAR drivers competing in virtual races from their respective homes.

BassFans are no different. With the major tournament trails on an indefinite hiatus, there’s simply not much going on. To help you pass the time on a Friday and into the weekend, we’ve combed through the expansive archives of the website, which has been online since July 2001. That’s a lot of tips, pattern recaps and tournament reports.

2019: Brandon Palaniuk has been enamored with big swimbaits since his teenage years growing up in Idaho. He carefully studied the California swimbait scene and was an early adopter of the soft-plastic boot tail-style baits. He then graduated to the larger jointed glide baits.

To read more about how Palaniuk has incorporated super-sized swimbaits into his arsenal and even got to help Storm develop a glide bait, click here.

2017: There was a time during Kevin VanDam’s career when a spinnerbait was one of his key moneymakers. While its popularity waned as other techniques and niche baits rose to prominence, the spinnerbait remains an effective option regardless of the conditions.

In this piece, VanDam breaks down his preferred retrieve and the skirt colors and blade combinations he favors in certain scenarios. To read more, click here.

2017: Paul Elias was the victim of a burglary on Easter Sunday three years ago while practicing for the Lake Chickamauga Southern Open. The thieves broke in camper and made off with thousands of dollars worth of tackle and equipment, including a Mercury prop, his supply of braided line and an assortment of hard and soft baits.

2015: The FLW Tour made its annual stop at Beaver Lake at this time five years ago. Andy Morgan, ranked No. 1 in the BassFan World Rankings at the time, caught a 15 1/2-pound stringer to take over the lead after day 2. He ultimately finished 3rd as Matt Arey collected his second straight win at Beaver.

2015: Fishing funnyman Fat Cat Newton, whose real name is Bernard Newton, had already established himself as a popular follow on social media by the time he posted this video showing underwater footage of bass spawning.

2010: While Bryan Thrift and Chad Grigsby chased largemouth in practice then targeted spawning smallmouth early in the Fort Loudon-Tellico Lakes FLW Tour, Glenn Browne cleaned up on largemouth in a backwater up the river. As a result, Browne drove off with his first Tour triumph. To read more, this video.

2010: South Carolina angler Jay Keith took home the win at the TBF National Championship at Watts Bar Lake by flipping a jig to laydowns and bluffs. Other anglers who posted notable finishes in that event included Ed Loughran, a current Elite Series pro, who won the Mid-Atlantic region. Palaniuk was the top finisher from the Northwest Region.

2005: In the 2004 Bassmaster Tour event at Smith Lake, deep-water finesse tactics wound up prevailing. The following year was a different story as sight-fishing came into play. Mark Davis relied on a finesse worm and spinnerbait to capture the victory with 24-14 over the final two days.

Meanwhile, the rest of the top 5 finishers mixed sight-fishing early in the event with plastics and hardbaits during the back end of the tournament. To read more about the 2-5 patterns, took home the win.

2002: In practice before the 2002 Lake Guntersville Bassmaster Tour, the water was dropping, but Kevin VanDam anticipated it would be coming back up during the tournament. That’s why he tried to locate pieces of shallow structure like stumps in the backs of pockets that would hold fish as they looked to spawn.

The scenario played out nearly perfect as VanDam finished 2nd to Kelly Jordon. To read more about VanDam’s tournament game plan, click here. Worth noting about VanDam’s tackle was the new Strike King 3X Lizard he used. Hailed as “three times softer and three times stronger” than other soft-plastic lizards on the market at the time.