BACK
A House United

Could You Survive Two Weeks With This Crew? 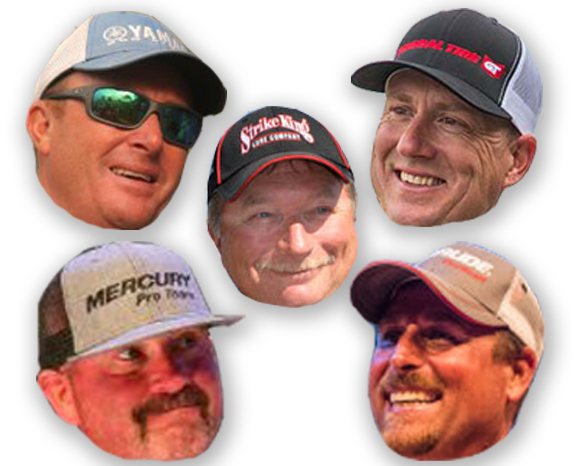 Over the past couple of months, scary words like pandemic and quarantine have become common vernacular as the world tries to wriggle out of the grip of the coronavirus. The pandemic has put the clamps on all spectator sports and all of the premier bass fishing tournament circuits for the time being. Pro anglers are, for the most part, stuck at home. Some have been able to continue fishing for fun or in some small, local derbies while others have been limited by statewide or local restrictions.

With a dearth of tournaments to cover, the BassFan staff has had to be creative in some of the topics we choose to write about. On April 8, a post to the BassFan social media channels posed a pretty simple question based upon a completely hypothetical situation in which 30 pro anglers – some current and some retired – were divided randomly into six different houses. Readers were asked to choose which house they would choose to be quarantined in for two weeks based on who the occupants were.

In case you missed the house rosters, here they are:

After carefully reviewing the comments related to the post across our Facebook, Instagram and Twitter pages, it’s been determined that House 5 received the most votes, narrowly edging out House 1 by less than 10 votes. A number of comments mentioned multiple houses, so those were counted as “undecideds.” Some folks suggested their own mix of names, thereby creating a House 7. All in all, it was a fun distraction that generated some banter about who might make good housemates and how the temporary living arrangements might work.

With House 5 garnering more than 70 votes, BassFan wanted to take it a step further and find out if the anglers assigned to House 5 could, in fact, survive or even enjoy a two-week quarantine session with the others. We asked them all the same six questions about being cooped up with four fellow pros for 14 days straight. Their responses are below:

Which house would you choose other than the one you’re assigned to?

> Bryan Thrift: House 3 because it has (David) Dudley and (Mike) Iaconelli. Dudley will argue with anybody and that would be beautiful to just sit back and watch those two.

> Denny Brauer: I’d pick House 4. Hackney and I have had a lot of good times together and we could have a few more. I’ve got blackmail material on him, plus Nixon and I go way back. It’d be fun all around.

> Scott Canterbury: I like the house I’m in, but I could fit in with any of them just about.

> Gerald Swindle: House 6. You can’t go wrong being quarantined with an Indian (Christie). Plus, if things went long term Fritts is a closet farmer and Aaron knows all kinds of roots since he eats so healthy. If we lose everything, Watson could help us sell the house.

How do you think you’d handle being locked in a house for two weeks with the guys in House 5?

> Thrift: It’d be fun. I think we’d be all be sitting around laughing at Gerald.

> Brauer: I’d think we’d have an absolute riot. They all have great personalities and I know them all. I’ve probably spent the most time with Skeet and Gerald over the years. I’ve gotten to know Bryan and Scott, so I’d be totally content being in a house with those guys. Gerald would keep us laughing and Skeet would make sure we didn’t get thirsty.

> Canterbury: I think everything would be good with our group. We’d have some comedy with Swindle and maybe get some info out of Thrift. I’d keep everybody well fed with my cooking and I’d like to squeeze some jig info out of Denny.

> Reese: Thrift would have to sleep in a tent because he smokes. Denny would be fun just to sit around the fire place and have a beverage with and tell stories. With Gerald, there’d be no shortage of entertainment. I don’t know much about Scott. He seems quiet and reserved so he might sit in the corner and listen to a bunch of dumbasses.

> Swindle: My redneck would go kill everything. Denny would do the cooking and Canterbury would be his sous chef. Thrift would be in charge of catching stuff to eat. Skeet could run a yoga class for all of us and teach us all about wine.

What do you think you all would talk about?

> Thrift: We’d probably just tell fishing stories. I know Canterbury is a good cook because he has an outdoor kitchen at his house. We’d eat good and laugh at Swindle so it’d be a good time all around.

> Brauer: It would start out with us talking about stuff that made sense. By day 3, we’d be on another planet. The thing with fishermen and outdoorsmen is we seem to never run out of things to talk about. We have so many experiences to draw from, either fishing or hunting, so the conversations would be very comfortable.

> Canterbury: It would be mainly be outdoors stuff. The problem is Thrift doesn’t know if a quarterback is on the football team or baseball team. He thought a point guard is the one who throws the football. He doesn’t follow anything. All he cares about is fishing and that’s probably why he’s so good.

> Reese: Since most of us are veterans, we’d probably be talking smack about the young kids coming up and how much different it is now. We’d sound like the old fart group complaining about what it used to be like. There’d be some trash talking between Denny and Gerald. Denny could stir the pot. He likes to talk smack.

> Swindle: Denny is a closet redneck and Thrift is way out there, too. I’ve hunted with Canterbury before and I’ve known Skeet forever, so all he’d do is talk about sushi and wine and California.

Who in the group would you get along with the best?

> Thrift: Probably Canterbury. I know him a little better than the rest.

> Brauer: Skeet just because we’ve spent time together in the past. We’ve been close for years, but I can get along with any of them.

> Canterbury: Probably Swindle and Thrift. I’ve hunted with Gerald before so he’d probably give me the hardest time. It’d be a fun house.

> Reese: Gerald and I have probably spent more time together just because we’re the same age and have had similar careers. Denny, even though he’s retired, we still keep in touch to this day. I respect him on a lot of fronts and we’ve always had a good relationship.

> Swindle: Skeet and I go way back and I’ve gotten along with Denny. I look up to him like a dad and even if I knew he was wrong and he asked me to go do something I’d do it because of how much respect I have for him.

Do you think there’d be any friction in the group?

> Thrift: Nah. I get along with everybody.

> Brauer: I could tick Swindle off in a hurry. I have before and I could again, just messing with his mind.

> Canterbury: None. We’d all get along for sure.

> Reese: Denny. We’d have to make sure we have some Depends for him at his age. And I’d have to give Gerald some fashion advice. His attire, at times, is interesting.

If you could blend your fishing skill set with that of one of your housemates, who would it be and why?

> Thrift: Probably Denny just because he’s been around so long and has seen and knows a lot. He’s been in a lot more situations as far as changes in the weather and patterns. Plus, I’ve forgotten how to fish shallow.

> Brauer: I’d say Bryan just because of his efficiency and versatility. He catches them so many different ways and he covers so much water and he’s so thorough. One of the biggest ruts I fell into was to whether to speed up or slow down or when to move. He has a great knack for that and it’s one thing any angler could pick up from him.

> Reese: I would love to have Denny’s prowess with a flipping stick and his understanding of shallow-water fish. I’d like to have Gerald’s openness to change on the fly and Thrift’s ability to break water down.

> Swindle: I’d go with Denny. From watching his career and knowing how he was able to take his strength and excel at it and not get distracted. For me as a junk fisherman, you do what you have to do in trying to be consistent and get paid. With Denny, it was more like, ‘Here it is. Come and get it.’

Who did we leave out? Tell us who would be in your ultimate angler quarantine house by sending us some Feedback.