BACK
Most Treasured Baits

Tales Of Another Fat Rap, A Big O And A Plastic Grub 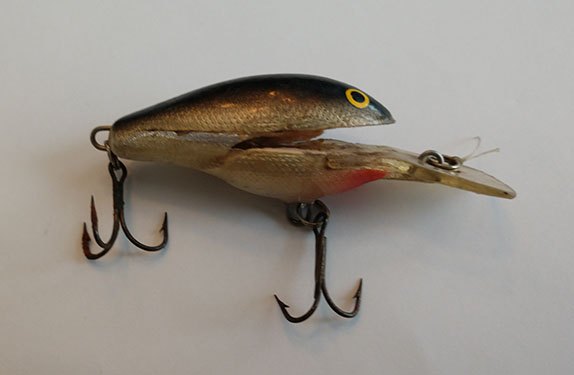 This Rapala Fat Rap caught more than 1,000 fish for Terry Battisti before a pair of 4-pounders rendered it useless.

In a feature article last week, BassFan senior editor John Johnson wrote about the personal significance of a Rapala Fat Rap 7 that was given to him by a late friend and co-worker almost 30 years ago. It asked readers to submit their own stories of baits that carry extreme sentimental value.

Here are a few of the responses we've gotten so far.

I got this bait right after Rapala did away with the better shad (SD) color, probably in the 1982-83 timeframe. I was skeptical at first, but my first outing with the bait at Lake Castaic, I can’t recall how many fish I caught on it. From there it became my go-to crank.

I won a couple of club tournaments on it that year and the year after. The bait caught easily over 1,000 fish for me in that time all over Southern California (Castaic, Piru, Casitas, Cachuma, Hodges) as well as in Arizona at places like Alamo, Havasu and the lower Colorado River. I dove for that bait on numerous occasions (we only used 6- to 8-pound mono for cranking in SoCal) and always came up with my beloved Fat Rap.

Then we had an inter-club tournament between our club, the AmBassadeurs of Southern California, and the Saddleback Bassmasters. This was the inaugural event, July 1984, held at the now-closed Vail Lake in Temecula, Calif. Of course I had my lucky bait tied on and it sure lived up to its expectations. By 9 o’clock in the morning, my partner and I had a limit (five fish) in the boat that was pushing 15 pounds.

We were rounding an underwater point and I fired the bait down one side so my retrieve would bring it past a downed tree. Reel, reel, reel, stop the bait at the tree, line ticks, and I set the hook into a good fish. As I called for the net, the weight on the rod changed to a dead, heavier weight rather than a good, hard pull. I didn’t know what happened, thinking maybe I had snagged something other than the fish or maybe foul-hooked it. My partner waited at the gunwale with the net and the next thing I know, he’s screaming. He dips the net in and brings aboard two 4-pounders. That cemented our win for the boat and the win for the club.

Upon releasing the fish from the crank, I noticed it had been modified by the two fish playing tug-of-war with it. They had split the balsa down the middle, rendering it useless. I was happy about the weight we’d added to our stringer, but was more unhappy about the demise of my favorite bait.

To this day I haven’t had as productive a crankbait as that lowly Fat Rap. The memories it produced still remain as some of my best in my fishing life. 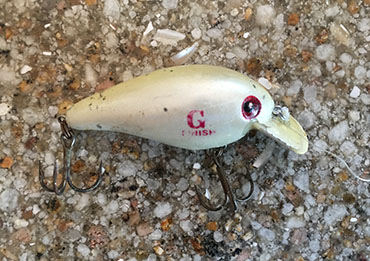 
Paul Finn caught a 6-pounder on this Cotton Cordell Big O on his final outing before his first child was born.

My sentimental lure is a 1/2-ounce chartreuse G Finish Big O from the early to mid 1990s. On April 15, 1995, I went fishing at Shawnee State Fishing Lake near Holton, Kan. It had been reasonably warm the last couple weeks and I was hoping to catch some bass. My wife was due with our first child the last week of April, so I knew my fishing time was going to be limited for a while. So this, I decided, was going to be my last trip till after my son was born.

When I got to the lake it was a little murkier than normal and I switched out from a Mann’s Razorback to the chartreuse G Finish Big O. I fished for a couple hours and the fishing was pretty good – I had a couple over 15 inches that were released and quite a few short fish. I came around a point and cast out parallel along the bank in about 5 feet of water. I started my usual stop-and-go retrieve and I had a bite, missed it, and continued to crank had another bite and missed it, too.

Still cranking, I had another bite and hooked up this time. I caught the fish, which at that time was my biggest bass in Kansas. It was 19 1/2 inches long with a big girth and weighed 6 pounds, 2 ounces at the local grocery market scales.

Unfortunately it was gut-hooked deeper than I have ever hooked a bass. The taxidermist had to cut the lure out of the fish when he mounted it. In the picture of the lure, you can still see the original line attached to the O-ring. This is the only bass I have kept since 1995 and the only bass I will ever have on my wall.

Today my son is my favorite fishing buddy and we go out pretty much every Saturday. He is as hardcore of a bass fisherman as I am. This lure has been retired and hangs in the mouth of the bass on the wall. I still use other chartreuse G Finish Big Os on occasion and still have seven new ones in the box on my tackle wall ready to go when the other old ones have paint chip off.

I have lots of lure, rod and reel memories in the basement and on the tackle wall. They never fade away and bring back many great memories of fishing with friends and loved ones. 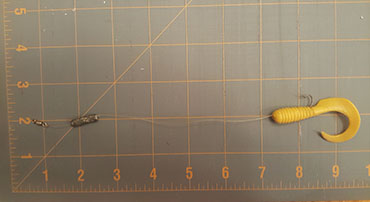 
Randy Brandenburg was struggling to master his first baitcasting reel when he unwittingly dropped this Bass Pro Shops grub onto the bed of a 5-pounder.

I grew up in Terre Haute, Ind. In the mid 1980s, my buddy Jamie Bowman and I fished at a gravel pit by our house as much as we could. Besides using topwaters we made ourselves out of maple tree branches (I wish I had photos of some of those!) and Rapala Original Floating Minnows, we used grubs on a lead head a lot.

The lure in my picture is a yellow Bass Pro Shops grub, with a twist (no pun intended). I had a pre-rigged Touchdown Worm – remember those? I had caught my previous biggest bass, probably about a 3 1/2-pounder, on it. After a few more bass, the worm tore and ripped off the hook, so I took the swivel, line and hook that came with the Touchdown Worm and rigged my yellow Bass Pro grub on it.

I had just gotten my first baitcaster. Jamie and I were fishing from the bank and my casting with my new reel was not going well. I kept throwing my yellow grub in the exact same place over and over again, even though I wasn't trying to.

It got dark. All of a sudden, I got a bite. Next thing we hear is this fish jump. We couldn't see it, but it sounded like someone threw a bowling ball in the water from 100 feet away.

I got her up to the bank and saw her – and I froze. I would never have landed that fish if not for Jamie. He jumped in the water and grabbed her up. I mean, I thought we caught the Indiana state record. It was only years later that I realized that fish was on a bed and I just kept throwing right on top of her.

She was close to 5 pounds, but to me, at the time, she was at least a double-digit monster. Shout out to Jamie; I never properly thanked him for his role in landing that fish.

Thanks for letting me share one of the best memories I have, not just of fishing, but in my life in general.

Do you own a lure that carries a great deal of sentimental value? If so, please snap a photo of it, write up a few paragraphs and send us an email at editorial@bassfan.com.