‘Doing My Own Thing’ Key To Canada’s Hot Start 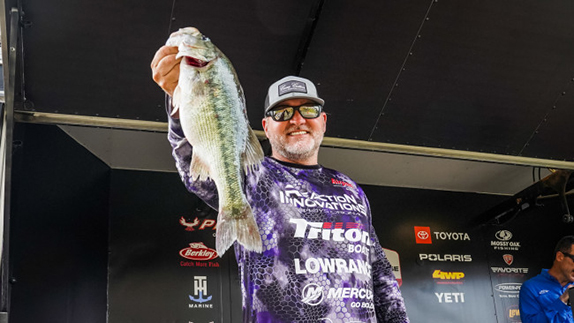 Jon Canada reeled off a string of three top-25 finishes to start the 2020 season.

As a rookie on the FLW Tour in 2019, Jon Canada got caught up chasing the dock talk narratives. He knows he wasn’t the first to do so, and likely won’t be the last. He also had myriad things weighing on his mind from a personal perspective.

His stepfather, James Franks, had passed away in late 2018 and he wanted to make sure his mom was being looked after. From a mentality standpoint, Canada admits he wasn’t totally plugged into fishing last year and it’s totally understandable.

The early portion of this season was a totally different story, though.

The Helena, Ala., native is off to a roaring start with three top-25 finishes, highlighted by a top-10 result in the season opener at Sam Rayburn Reservoir, where he’d started his rookie campaign with a miserable 152nd-place showing. Canada currently sits third in the FLW Pro Circuit points standings, behind Ron Nelson, another second-year pro, and Matt Becker, who’s in the midst of his third season.

While he’d have loved to been able to keep his momentum going, Canada is trying his best to stay sharp during the hiatus brought on by the coronavirus outbreak, a break that may extend into early summer. He’s trying to get on the water once or twice a week and has been mixing in some turkey hunting.

“You want to keep the wheels rolling,” Canada said. “I try to go to the lake once or twice a week to keep in touch so when things get going again, I should be able to keep the momentum going.”

Getting on the water has been somewhat of a challenge at times, Canada says. He prefers to fish many of the lakes on the Coosa River, but lately some scenes he’s witnessed were more in line with Fourth of July crowding, which is why he’s scaled back his outings.

“Everybody in the South seems to be cracking them,” he added. “With the fishing as good as it’s been in the South over the last 20 days, I can’t imagine how good it would’ve been at (Cherokee Lake).”

Took Lumps As a Rookie

As tough as his rookie season was, Canada said he learned a lot. It’s not always easy to glean positives from three triple-digit finishes and another in the 90s, but he did. Most notably, he developed a deeper appreciation for what it takes to find enough fish to last three or four days of competition against a field of 150 or more.

“I’d go fish and I’d find some fish, but it’s a big difference from one- or two-day deals compared to four,” he said. “Especially when you’re up against 150 other guys who are just as good. They find the same places as you did.”

He also saw how big a factor consistency can be. Rather than hunting big bites every day and risking coming to the scales without a limit, he realized there’s a fine line between going for it and staying in the game.

He attributed that to his desire to catch lightning in a bottle and win a tournament as a rookie, so he could dedicate it to his deceased stepfather.

His first taste of the Tour at Rayburn was a big wake-up call. He hadn’t fished much in the months after his stepdad’s passing and, in some ways, it showed.

“That was a big learning experience,” he said. “I’d done well around the house before, but that first tournament I was absolutely embarrassed. I had a great practice, but the water was coming up and I didn’t adjust.”

’In A Good Place’

Canada said the foundation for his hot start this season starts at home.

“It’s a lot easier to concentrate and pull out of the driveway when things are good at home,” he said. “Last year, I had a lot of family stuff going on and I was helping my mom a lot. This year, I’m in a good place and I’m getting back to fishing how I used to. It’s hard to concentrate on that when you have stuff going on at home. Now that everything is stable and good with my mom and good at home, I’ve been able to focus better on fishing.”

He’s also taken to camping while away at tournaments. He said fellow Pro Circuit angler Brad Knight talked him into getting a truck camper and he says it’s made a big difference.

He officially turned the page at the season opener, which was back at Rayburn in January. To be better prepared this time around, Canada visited the lake before it went off limits.

“Instead of getting up on one thing, I looked at different areas,” he said. “I noticed a lot of the grass was gone because of all the high water and flooding they had last year. It didn’t seem like there was enough grass to hold up to all the pressure.”

During official practice, he launched at a ramp up in the Angelina River arm as a way to sample some water away from the crowds. He caught three solid keepers before cutting his hooks off and wound up with close to 20 bites that day pitching a creature bait and winding a vibrating jig. He knew where he was headed on day 1.

“I felt truly blessed and amazed because you do doubt yourself out here against these guys,” he said. “When those things happen, it makes you feel like you’re doing the right thing. (At home) on the Coosa River, we’d catch them by getting away from the crowds, so to see that it helped and worked getting away from everybody helps your confidence.”