Mark Daniels Jr. had plenty of reason to smile Friday after catching nearly 85 pounds at Lake Fork to lead Group A after day 1.

Your move, Group B.

Lake Fork transformed into Lake Fun for many of the Bass Pro Tour anglers who were among the first wave of competitors to tackle the iconic fishery outside of Dallas. Under overcast and sometimes dreary skies, the action was steady and heavy throughout the day and when lines were reeled in at 6 p.m. local time, ScoreTracker was littered with some eye-popping totals.

Leading the way was Mark Daniels Jr., who was on a 100-pound pace for much of the first and second periods. A dry spell toward the end of the second dashed those hopes, but he still piled up 84-15 on 24 fish to set himself up for when Group A returns to the water Sunday.

“It felt great,” Daniels said. “Now with the incentive of advancing (for winning the group), there’s a long way to go, but to get things kicked off in that way, it’s good for my mindset and momentum and all of that. I gave myself a base.”

Jeff Sprague, a Texas native with years of experience at Fork, waited until the third period to do the bulk of his damage. His 37-05 was more than he totaled over the first two periods and pushed him into second place with 72-12 (20 fish). A 5-03 at the end of the day gave Sprague a four-pound cushion over Jason Christie, who returned to form with a dynamic final two periods.

Christie, who failed to record a fish catch at the season opener at Lake Eufaula before finishing 49th at Lake Okeechobee, set the Major League Fishing individual fish weight record with a 10-04 – also his personal best – in the second period. He tacked on a 9-02 behemoth toward the end of the third and wound up with 68-12 (17 fish). Randall Tharp caught a 9-15, but he was 26th with 35-08.

With conditions rounding into shape and the bass beginning to swarm into spawning zones, a perfect storm of sorts greeted the Group A anglers, some of whom started to get a sense during practice that day-1 weights could be pretty stout.

“I was not surprised at all,” said Bobby Lane, who is 11th with 55-06. “The three warm days before today, the fish started spawning everywhere and where you saw four in practice there was 10 laying around today. It’s crazy how quick they made beds. Now it’s going to get colder, so we will see what happens.”

On Saturday, the remaining 40 pros will get their event under way as the game of "Can You Top This?" gets cranking. They'll likely be faced with a little more volatile weather than Group A had today. Thunderstorms are expected for the area around Fork.

Daniels, who started the event just below the cutline for Redcrest qualification in points (31st), wasted no time unmasking an area he felt showed some potential in practice. He tallied 12 fish in the first period, including a 5-14, while no other angler had more than seven. 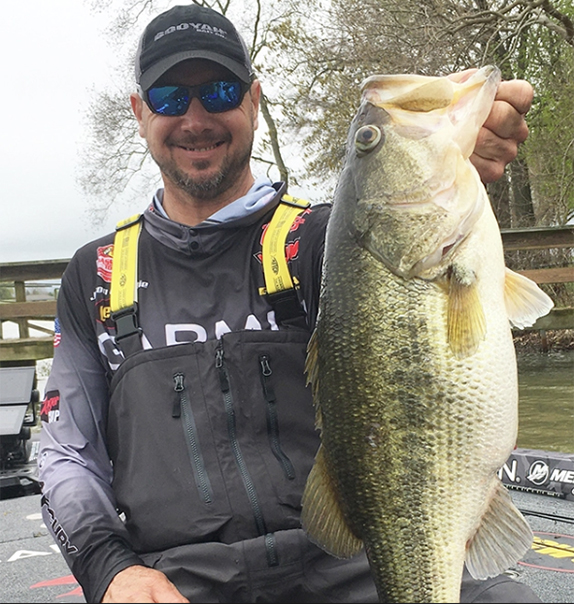 
Jason Christie has made a habit of catching 10-pounders at Lake Fork. He added an MLF-record 10-04 to his ledger today.

“I went in there looking for two or three bites,” he said during the MLFNOW! broadcast immediately after competition ended for the day. “It blew my mind how many fish had pushed into that small area. I just kept making laps and kept picking off fish. To catch 84 pounds, that’s catching them! It was just a stellar day.”

Nobody needed a stellar day quite as bad as Christie did, though. He was 22nd after the first period with four fish for 12-05. He caught the same quantity in the second period, but they totaled 24-02 and he rocketed up to 10th. He picked off nine more in the third for 32-05 to punctuate yet another memorable day at Fork.

The 10-04 not only set the MLF record for the biggest fish – Christie doesn’t see that lasting long this week – it marked the fourth double-digit bass that he’s caught at Fork. He caught two (10-2 and 10-1) in the last Toyota Texas Bass Classic held there in 2015 and then caught another 10-pounder in practice this week.

“I didn’t feel good in the first period, but in the second I got on a stretch and was catching some,” he said. “It was a weird day because I felt like I’d catch some and get to 12th, then fall to 20th if I wasn’t catching one every five minutes. It’s a lot different. I felt like I was catching them and knew what was going on, but I’d be idling out of a place and leave in 12th and then wind up way down when I got to the next spot.

"It’s just stressful. Nobody has any idea what it’s like. To have as good a day as I did, I still feel like I need one of those straightjackets.”

Even with a minor cold front looming, Christie doesn’t see much changing in the way the fish are setting up.

“I think it’s gonna stay this way,” he said. “With what’s going on and the weather we have and the moon, it’s set in.”

Daniels, on the other hand, might go exploring on Sunday with an eye toward pinpointing a few more “hardcore pre-spawners.”

“They’re in that area,” he said. “It’s just a matter of figuring out where they’re set up and what they want. I should be able to make something happen.”

He said the bulk of fish he caught today were either on beds or circling around those same areas “on the brink of spawning.”

“Honestly, I need to go do some practicing because I think my area is toast,” he added. “It was a special area and there was an extra small area where I caught the vast majority of them. Obviously, I will give them another go, but having that lead will gives me flexibility to try new things.”

Trying something new is what helped carry Ott DeFoe 16 spots up ScoreTracker in the third period as he settled into ninth with 55-10 (18 fish). DeFoe endured a couple lengthy dry spells before tallying 11 fish for 31-10 in the final stanza.

“I moved to one area where I knew there were a lot of fish, but it was not close to where I was,” DeFoe said. “I actually fought with myself about going, but after I got there I spent the last two hours in a pretty small area and worked on them.”

He doesn’t plan on making any changes to how he’s fishing for Sunday.

“I think the conditions made them a little more aggressive, but mostly they’re doing what they’re doing,” he said.