Pipkens Hoping His ‘Number’ Gets Called This Week

Chad Pipkens is carrying more confidence into this Classic than he did at the first two he competed in.

This is Classic number three for Chad Pipkens. In his mind, though, it’ll be the first one where he truly feels like he has feet under him as a pro angler.

“I’ve learned a lot in the last three years,” he said. “I feel like I’ve had my best three years of fishing. I’m making good decisions, but it’s taken a little time to transfer that over to the Elites. It’s starting to happen. It’s close to really clicking. Like really close. It feels good to be on the water and be doing what I want to do. I’m not worried about what everybody else is doing.”

He was quick to recall a misstep he made during the ’16 Classic at Grand Lake, where Edwin Evers went on to win behind a massive day-3 stringer. Pipkens got caught up thinking the winning fish would be caught down lake in some dirty water with a crankbait. He was mistaken and he took it as a learning experience.

“I was trying to find a way to win,” he said. “I was fishing down the lake and I wasn’t fishing my strengths. It was dirtier water and there was a creek with cleaner water where Edwin ended up catching them. I had bites in there, but I specifically didn’t go there because I thought you could win down the lake.”

This week, he’s feels like he’s in more of a comfort zone.

“These practices, I still bounce around, but I try to fish how I want to fish and what I’m confident in,” he added. “I like grass fishing so I’m not going to run way up river. I’ll fish in areas that have fish in them historically and just put in the time. I’ll do more graphing so I can learn the body of water more.”

On top of his elevated level of confidence, Pipkens is hoping to cash in on the new-dad roll that others have experienced after welcoming their first child.

His infant daughter, Emerie, recently tipped the scales at 8 pounds, 10 ounces at her one-month check-up. That happens to be the same weight of Pipkens’ personal-best largemouth, which was caught at Lake Fork during Toyota Texas Fest last year. Lake Fork, oddly enough, is located close to Emory, Texas, which was not lost on Pipkens.

While Pipkens wouldn’t mind a win at Fork later this year when Texas Fest returns to the big bass lake, he also wouldn’t mind his number getting called this week either.

“It has to mean something, right,” he said.

Good to be Back

Consistency has always been a hallmark of Keith Combs’ fishing career. Between 2011-18, he was in the Classic every year except one. Then he missed it in 2019, but not by much. Still, it ate at him and makes him relish his return that much more.

“It’s always great to be at the Classic. It’s what you strive for all year,” he said. “It stings to miss it. I hadn’t missed it in a long time and that sucked last year.”

This week, he’ll gauge success on whether he can get himself in contention to win on Sunday.

“Everyone will give you the lame answer that they’re going to win the Bassmaster Classic, but you don’t know that,” he said. “If you can put yourself in a position and keep doing that you’re going to be okay.”

He’s also going to welcome the change in weather conditions that are forecast for Friday. After several days of rain, the sun is due to break through and stick around through the weekend.

“I’m not excited about the wind forecast because I want to be able to move around and do different things,” Combs added. “As far as changing water level or temperature or water color, I’m okay with that. Practice wasn’t all that great so if there’s any change, I’ll embrace it. We need something to change.”

Clifford Pirch says he is better equipped to tackle Lake Guntersville this week than he was in 2014 when he made his first Classic appearance there.

He remembers catching a 5-pounder on the first cast of practice six years ago and the rest of the week being a bit of dud as he finished 51st.

“I was splitting a deal with Casey Ashley and he had a better first day,” Pirch recalled. “He basically needed the spot to himself at that point, so I moved and tried to make something happen.”

His backup plan never materialized, and he sunk toward the bottom of the standings. In the five Classics since, though, he has not finished lower than 36th. 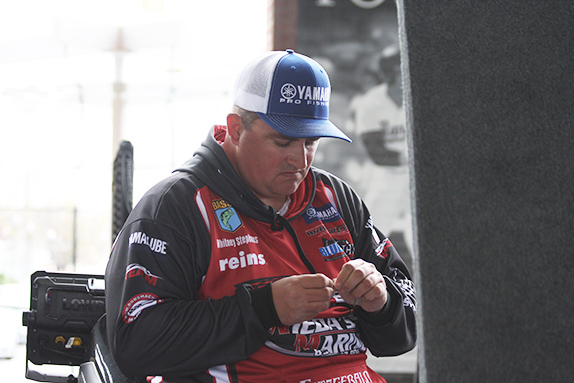 
Whitney Stephens says he's been more relaxed this week after having experienced the Classic back in 2016.

“What I did wrong was I didn’t catch enough out of the gate to be able to hold my area,” he said. “I didn’t know a whole lot about Guntersville or fishing a Tennessee River event in the cold weather of February. It’s a season we don’t really have in the southwest. It was a lack of familiarity where I’ve had a little more experience since then.

“I’m a lot more well-rounded fisherman and I’ve had a lot more experience out here since then. Maybe I’ve been around enough of these that maybe I can make something work.”

Knew What to Expect

Whitney Stephens admits he was a bit overwhelmed by his first Classic experience in 2016 at Grand Lake. He made it a point that that wouldn’t happen again this week.

“I’ve not gotten overwhelmed by it all. I’ve embraced it and enjoyed it more this time around,” Stephens said. “The first time around you don’t know what to expect with all the extra activities. This week, I’ve been prepared for that so every time you do get a spare moment, you’re working on tackle or looking at the map. Your time is just very limited. It’s about how you manage the extra activities.”

He says it’s led to a more relaxed mindset as he prepares for the 50th Classic.

“I’m going to treat it like any other tournament but I’m going to try to figure out the right techniques to win the tournament,” he added. “It’s the Bassmaster Classic. We’re reaching for the pinnacle.”