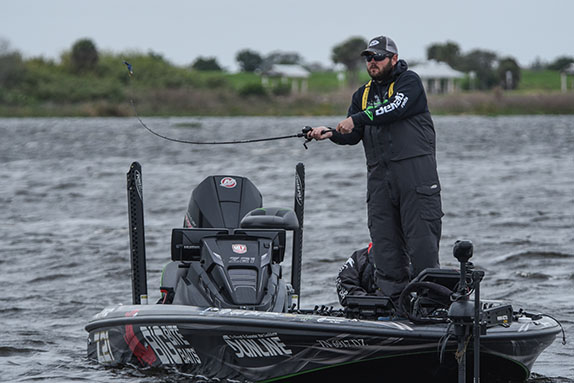 Finding areas with the right depth and submergent vegetation was the key to Michael Neal's runner-up finish at Lake Okeechobee.

Lake Okeechobee wasn't a real fun place to fish when the second Bass Pro Tour event of 2020 got under way on Feb. 21. A cold front had caused the air and water temperatures to fall and the wind blew like crazy out of the north. The temperamental Florida largemouths responded the way they always do under such circumstances – the majority of them simply refused to bite.

The situation had improved dramatically, however, but the time the tournament concluded last Wednesday. The lake had warmed back up, a lot of fish returned to the spawning grounds and most of the 10 anglers who'd advanced to the Championship Round experienced the pleasure of battling some big 'uns.

Following are some pattern details for the four competitors who lined up directly behind winner Jacob Powroznik on the final standings sheet.

Quite a few anglers in the 80-man field raved about how good the fishing was during the two-day practice period that took place just prior to the arrival of the cold front. Michael Neal was not among them.

"It was pretty slow for me," he said. "The first day was super-slow – I tried to flip too much and didn't cover enough water. I finally put a moving bait in my hand and found a few areas that had some fish in them."

His five reliable locales were spread from the mouth of the Kissimmee River all the way to Harney Pond. He keyed on submergent vegetation – mostly eelgrass, but one place featured hydrilla.

He was one of several anglers who held the lead at some point in the Championship Round before Powroznik took command with a third-period flurry. He caught 14 scoreable fish for the day, which was just one fewer than Powroznik, but his 38-05 total left him more than 11 pounds in arrears.

"The key for me was covering as much water as I did on the second day of practice and finding areas that had more depth to them with submergent cover," he said. "By depth, I mean a foot and a half instead of one foot."

A swimjig and a soft-plastic stickbait were his primary offerings in the Championship Round. Throughout the week, he also employed a vibrating jig and a swimming worm. 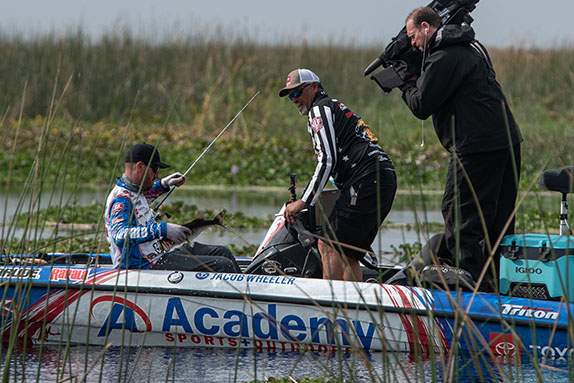 Jacob Wheeler came within two places of back-to-back victories to start the season. He was the final angler to hold the lead in the Championship Round before Powroznik went on his fish-catching rampage and finished with 34-06 on 12 scoreables.

He found an area on the first day of practice, located between Harney Pond and the Monkey Box, that was holding fish in all three stages of the spawn. He threw a swimjig on his first two competition days, but switched to a frog and a propbait once the lake warmed up again.

"The place I fished had eelgrass and a shell bottom," he said. "The eelgrass was thinned out ... kind of spotty. The fish could spawn around the clumps. If they made a bed in the eelgrass itself, they were hard to catch."

He didn't have a lot of company – he saw only three other competitors across the course of the event.

"Really understanding the potential of that area was the biggest thing. I only got three bites in practice, but two were over 5 pounds and the other one was 2 3/4. With a 2-pound minimum, those are the ones you want. I had other areas where I could've gotten more bites, but the quality wasn't as good.

"I really had to slow down; I don't mean fishing slow or using a slow-moving bait, but dropping the Power-Poles and making repeated casts to the same places. I had to really pick it apart." 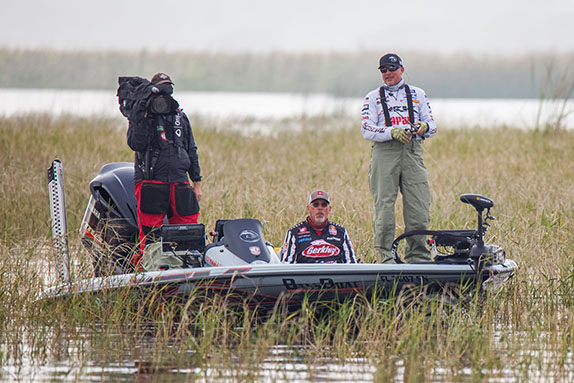 
Randall Tharp held the lead entering the final period of the Championship Round, but registered just one more catch.

With vast experience on Okeechobee that includes a tour-level win and a slew of high finishes, Randall Tharp was on just about everybody's watch lists going into the event. Nobody was surprised to see him end up in the top-5.

Due to the unstable weather pattern, he considered spending most of his time in the canals that ring the lake. Ultimately, he determined that the derby would likely be won in the main lake (which it was) and committed himself to it.

He fished "community stuff" the first two days and caught enough to advance to the Knockout Round. At that point he moved to his "juice" in the southern part of the lake, where he targeted reed heads, eel grass, lily pad stems and hay fields with both flipping and casting (swimjig, swimming worm) approaches.

"I'd have never made it to the Championship Round if I'd gone to the juice first," he said. "That made it tough because it wasn't easy to catch one up north, but I had a few places where I could catch one if I needed it.

"Ultimately, I wish I'd fished new water on the last day, but it takes 30 minutes to idle out of where I was and get on plane. In MLF, you've got to find an area and milk it for all it's worth. If you're running around, you're putting yourself behind."

He was on top of the leaderboard at the start of the final period of the Championship Round, but landed only one scoreable fish the rest of the way.

"I gave myself a chance and that's all I could ask for. What really helped (Powroznik) was he had an area with no local pressure. A lot of people love fishing down where I was and they don't care if you're fishing for 100 grand." 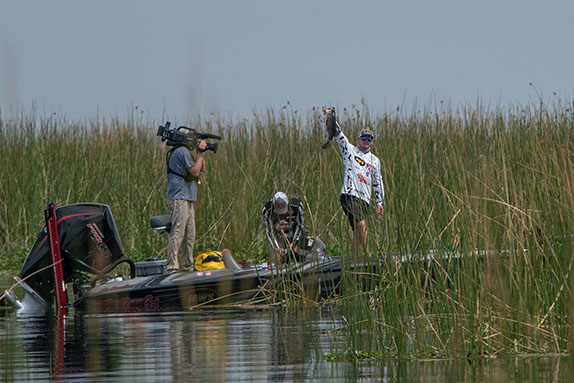 
Jeff Sprague started out pursuing the same fish that Jacob Powroznik won with, but lost track of them.

Jeff Sprague said he went to Okeechobee with no preconceived notions about how or where he would fish.

"All I'd heard was how bad the lake was (due to reduced vegetation from prior years) and how much it had changed. I deleted all the waypoints in my graphs and went with a fresh outlook.

"I ran around the entire lake in one practice day and looked at as much as I could, looking for clean water and new vegetation. I needed to see how much it had changed because I hadn't been there in a few years."

He ended up on the north end of the lake, very close to where Powroznik caught the winning fish.

"I was actually fishing for the same fish he was fishing for. I'd found them, but they were about 200 yards out from where he caught them in dirty water. The entire first day of the event I had zero success with them and I never thought they'd have moved shallower when the water dropped (due to the strong winds), but they did.

"I went to an area that was more protected from the wind for my second, third and fourth days."

That place had eelgrass and a mixture of buggy whips and cattails. They were spawning in water that was 2 1/2 feet deep or shallower. He sight-fished about half a dozen scoreable specimens and caught the others on either a swimjig or a swimming worm.

"At first I didn't realize that those fish were still coming," he said. "In practice they weren't in there quite that good."