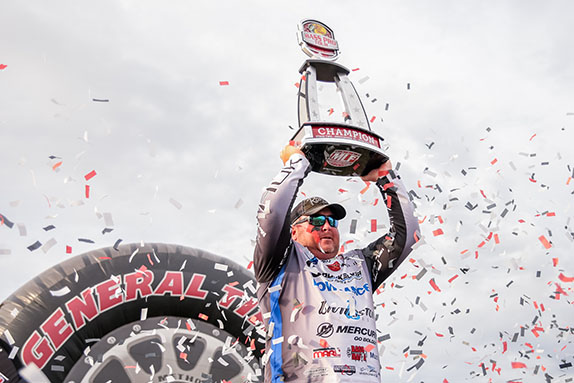 Jacob Powroznik's victory at Lake Okeechobee was his second on the circuit in 10 regular-season events.

When Lake Okeechobee was stingy during the early rounds of the recent Bass Pro Tour event, Jacob Powroznik caught enough fish to keep himself in the game. When the massive Florida venue warmed up again and the 4- and 5-pounders began to cooperate, he put on a show.

Powroznik joined Jacob Wheeler, who topped the field in the season opener at Lake Eufaula, as two-time winners of BPT regular-season events as he boated 15 scoreable fish (2 pounds or heavier) for 49-11 in the Championship Round. He outdistanced runner-up Michael Neal by more than 11 pounds.

He did the majority of his damage in the last of the three 2 1/2-hour periods, boating eight fish for 28-14. Once he took the lead (he started the period in 6th place, almost 8 pounds behind leader Randall Tharp), he was untouchable the rest of the way.

Following are some details of the program that carried him to his latest triumph.

Change was the Theme

Like many competitors in the 80-angler field, Powroznik got a lot of quality bites during the two practice days.

"It was warm and they were biting really good, then the front came through," he said. "The worst part of that was the wind – it killed (the action) in a lot of places."

The southern end of the lake took the brunt of the powerful north wind's effects, but he nonetheless headed that direction in the first of his two Group B qualifying rounds. He flipped a jig and caught five scoreables for 11-05, along with a bunch of fish that were 1 to 3 ounces shy of the minimum weight.

"The second day I started up north where I'd had some really good bites in practice and I ended up catching a fair amount right off the bat. I knew I'd made the cut, so I didn't run back down south.

Indeed, his 24-11 total on 10 fish for the two days left him in 4th place in his group and moved him on to the Knockout Round. With the water warming and clearing, it was in that round that he moved into his eventual winning locale.

The place was a large spawning flat near the mouth of the Kissimmee River.

"There's a bunch of fish that always live there," he said. "It had eelgrass and some scattered reeds. I knew when they decided to move back up, that's where they were going to go."

"It was one of those things that just lined up right. The best thing about it was I never saw another competitor's boat."

Powroznik arrived at the flat early in the second period of the Knockout Round. He caught a couple fish that helped him before the end of that period, then amassed about 21 pounds in the next period to finish 6th and advance to the Championship Round.

Deducing that the place was an "afternoon deal," he began the final round in Tin House Cove and caught two scoreables, including a 4-pounder. Once he got to the flat, he could see that there was a fish on every bed. He looked at and caught a couple (one of those was a 5 3/-4-pounder), but piled up the vast majority of his weight by swimming a worm.

He said that about 2:30 p.m., he remembered that was the final place he and his late father ever fished on Okeechobee in 2015 (his dad passed away in 2017). A few minutes later, he started a flurry of catches lasting about 20 minutes during which he took the lead and built a comfortable advantage that would never be challenged.

"It was 2:38 when I went on that tear," he said. "I know he was sitting right there in the boat with me when it happened.

"The last time we were there we spent all day on that same stretch. We didn't catch any real giants, but we had quite a few 4- to 6-pounders – a lot of really nice fish. The water was just gin-clear that day. It's one of those days that I'll never forget."

> Powroznik said the key features of his flat were a hard bottom structure (pea gravel) and enough eel grass to attract fish that were ready to spawn, but not an overabundance of it that would've made them more difficult to see and catch.

> He burned his worm as fast as he could on a high-speed reel. "It was more of a reaction bite than anything," he said. "I just couldn't reel it fast enough."

> "I used four or five different brands of worms," he said. "It didn't matter as long as they were junebug." 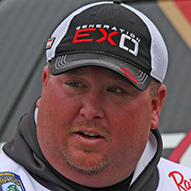