BACK
Gets 2nd BPT Victory 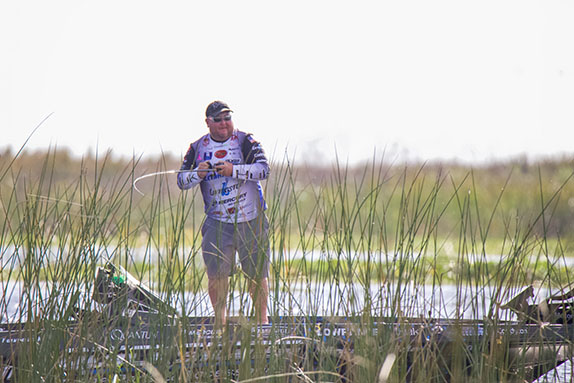 Jacob Powroznik's rod was bent for much of the final period of the Championship Round at Lake Okeechobee.

Six anglers entered the final period of the Championship Round at the Lake Okeechobee Bass Pro Tour with a realistic shot at claiming the win. Jacob Powroznik was at the bottom of that list, but he didn't stay there long.

The Virginian dominated the final 2 1/2 hours of the event to earn his second victory on the circuit in 11 outings. He caught eight scoreable fish (2 pounds or heaver) for 28-14, giving him totals of 15 fish for 49-11 on the day.

When it was over, nobody was within 11 pounds of him.

It was an emotion-packed rally, as it went down at the last place he fished at Okeechobee with his late father. It was a big spawning flat in the northern part of the lake and he caught his fish by swimming a worm around shallow eelgrass and dollar pads.

"I just had a feeling – everything was setting up perfectly," he said. "I was the only boat that was in there the whole tournament and that's unheard of on Okeechobee.

"You've just got to keep your head down and keep grinding because you never know. I've fished here a bunch of times going back to 2003 and I've had some really good finishes and some really bad ones. (Today) was a lot of fun for a while and I know my dad was sitting right there with me all day."

Powroznik, the winner at last year's three-lake derby out of Raleigh, N.C., caught a 4-15 specimen with an hour and 20 minutes left in the day to take the lead for the first time. With 20 minutes remaining, he boated a 4-07 to push his advantaged into double digits. Nobody got close to him the rest of the way.

He caught a couple of his fish while looking at them on beds (he has few peers when it comes to that tactic), but most at the worm when it was on the move.

"I had the one 300-yard stretch that had all the right ingredients," he said. "Bass love spawning in the eelgrass and it had the right depth (about 1 3/4 feet of water). That's where the majority of them were.

"I swam a worm for 4 days and it paid off. The main key was keeping the bait wet. There were so many beds and sight-fishing is what I really wanted to do, but I made myself forget about it and just keep fishing. Once I took the lead, I never put (the worm) down the rest of the day."

Now in his ninth year of tour-level competition, he has nine top-5 finishes but is still in pursuit of his first victory.

"It was a great week overall and I caught tons of fish," he said. "If you would've told me it was going to take this much weight today, I wouldn't have believed it. One thing that hurt me was having to catch so many in the Knockout Round – if I could've let my whole area rest, it might've been a different outcome."

Wheeler was the last angler to hold the lead prior to Powroznik's ascension into the top slot. His only scoreable fish of the third period was a 6-pounder.

"I gave it all I had, but that's just how it rolls sometimes," he said. "I caught some really big fish. If you can get down here on a warming trend, this place has got them."

Tharp held the lead for a substantial portion of the day, but like Wheeler, he added to his total just once in the third period. He was the only one of the six contenders fishing the south end of the lake, and that area was the first to receive the powerful winds that arose in the afternoon.

The next BPT event gets under way March 13 at Lake Fork in Texas.

(Weight of angler's heaviest bass for the round in parentheses)