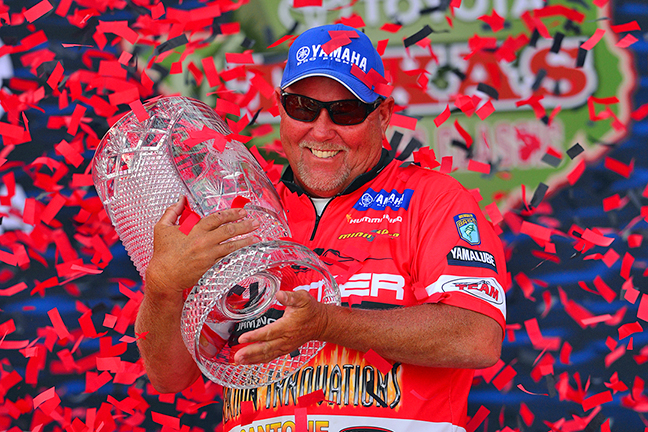 Matt Herren achieved his first top-level victory in nine years on this date in 2016 as he caught a 17-04 final-day bag for a three-day total of 51-12 to win the Toyota Texas Bass Classic at Lake Ray Roberts.

The veteran from Alabama compiled the bulk of his stringer early in the day as he got six bites before 10 o'clock. Included among those was a 5 1/2-pound kicker.

It was Herren's first win since he topped an Eastern FLW Series tournament at Lake Dardanelle in 2007. It garnered him $100,000, plus a fully-rigged boat.

“It’s incredible,” he said. “There’s a lot of hard work that goes into this and a lot of people that pay a big price for me to do what I do. It’s amazing. I’d always wonder when it’d be my time.”

Herren held off Bryan Thrift, who started the day 12 ounces off the lead as he stalked his second career TTBC title. Thrift caught a final day-best 17-08 to finish with 51-04, just 8 ounces shy of Herren.

Ray Roberts was mostly an unknown venue to the field prior to the event. It was home to some big fish, but the sense was that the population of lunkers and bass in general wasn't close to what swam at Lake Fork or Lake Conroe, the previous TTBC venues.

Here’s a rundown of some other news we’ve covered over the years that we published May 22. Check back next Friday for another batch of archival content.

Mark Daniels Jr., by then an Alabama resident, detailed how he'd returned to his old stomping grounds and won the Western FLW Series event at the California Delta in a Winning Pattern article. He'd gone west to visit his mom for Mother's Day and entered the event after discovering that the conditions on the Delta were much to his liking.

"I knew I had to try to sign up and fish this tournament," he said. "I had to scrounge around to find enough tackle (as all of his primary gear was thousands of miles away) and a buddy of mine let me borrow his boat."

Despite weighing only 7-13 pounds on the final day, John Cox closed out a wire-to-wire triumph at the Red River FLW Tour. He finished a little more than 5 pounds ahead of runner-up Mark Rose.

The win provided a major dose of relief for Cox, who'd surrendered a 10 1/2-pound final-day advantage at Lake Okeechobee the previous year and watched Scott Martin take the trophy.

"I only had two fish at 1:30 and all I was thinking about was when Scott beat me last year. The very last one I caught was a 2 1/2-pounder, and it was like a big weight was lifted off my shoulders."

Jason Williamson took command of the Clarks Hill Lake Bassmaster Elite Series with a tournament best 19-02 sack. His haul, which was highlighted by a 7 3/4-pound bruiser, gave him a lead of more than 4 pounds over the field.

Williamson would go on to post his second victory on the circuit the following day.

Mark Davis caught his lightest bag of the week on the final day of the Tenn-Tom Bassmaster Elite 50, but his 28-15 total over the final two days was enough to hold off runner-up Kevin VanDam by a little more than 2 pounds.

Davis topped the standings after each of the event's four days. It was his second victory of the year – he also prevailed at Table Rock Lake.

"This is really, really sweet," he said. "Going wire to wire is awesome, I'll tell you. It's very gratifying. It's a first for me. It's been a phenomenal week. I don't know when I've had one better."

A field of 73 anglers who qualified via assorted routes was preparing for the Professional Bass Fishing Hall of Fame World Championship at Lake Ouachita in Arkansas. The stingy bite was primarily blamed on the largemouth bass virus (LBMV), which had been discovered in the lake the previous year.

Greg Carpenter, a semi-local FLW Tour competitor, caught 12-13 in the final round to win the event. He and another Arkansan, 2nd-place Stephen Browning (10-01), weighed the only double-digit bags.