Adapting To Drastic Changes Was Important 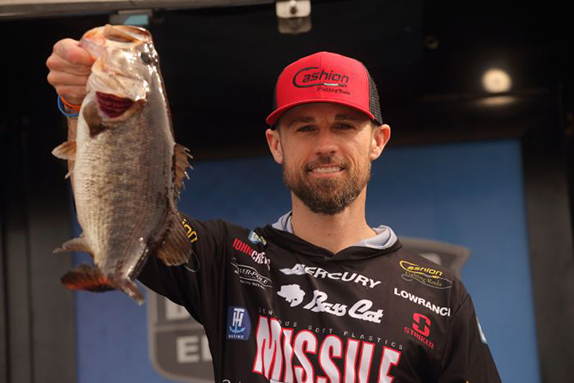 John Crews was fortunate to wind up in an area that had deeper water where the fish weren't as affected by the dropping water levels.

Who could blame any of the 88 Elite Series anglers for licking their chops in advance of the 2020 season opener at the St. Johns River? After all, the St. Johns had produced some incredible fish, eye-popping stringers and staggering totals during the 2019 opener. The thinking was the encore could be even better.

Mother Nature had other plans.

A wicked cold front packed with strong south winds hammered the upper east coast of Florida after practice concluded last Tuesday and put a damper on just about everything. Water levels dropped as a result of prolonged winds blowing with the current flushing water out of the river. That took many of the sight-fishing opportunities out of play and prompted fish that had already moved shallow to edge back toward deeper water.

It made for a challenging tournament, which was shortened to three days after two attempts to start the tournament were nixed by high winds. Ultimately, the St. Johns didn’t shine as bright as it was expected to despite the tournament falling on a full moon. It was a mixed bag of patterns and techniques for the balance of the top 5 after Paul Mueller collected the win on a swim jig and with a punching pattern on day 3.

Here’s a rundown of how the rest of the top finishers caught their fish:

John Crews says he got lucky because he settled in areas that were still productive during the low-water scenario that faced the Elite Series field last week.

“I was surprised with how low the water got and how low it stayed,” he said. “That really screwed the guys who found some fish in practice. When it bottoms out, you have to go to deeper areas and I fished areas that were good on low water and when the tide was out.”

And despite being off the water for three straight days prior to the start of the tournament, Crews said what he found and developed in practice still helped him once the competition got going.

“I was getting five or six bites per day in practice and they weren’t too scattered,” he said. “They were in a couple stretches. One area where I got three bites was a little deeper and that’s where I caught two-thirds of the fish I weighed in. That area had a mix of pads and docks.”

Through the first two days, he relied on a Tokyo rig and a dropshot around sparse cover to utilize a new Missile Baits soft plastic that will be unveiled to the public at the Bassmaster Classic in March. The bait is called the Quiver and will come in two sizes. Crews said he designed the Quiver after fishing a bunch of different plastics on a Tokyo rig during the 2019 season and not really finding one that he liked.

He adapted on day 3 and went to a vibrating jig to collect his second straight top-10 at the St. Johns River.

“I hadn’t caught anything on a reaction bait all week and I caught all six of my keepers on that (Monday),” he said. “I couldn’t get bit on a slow-moving bait.” 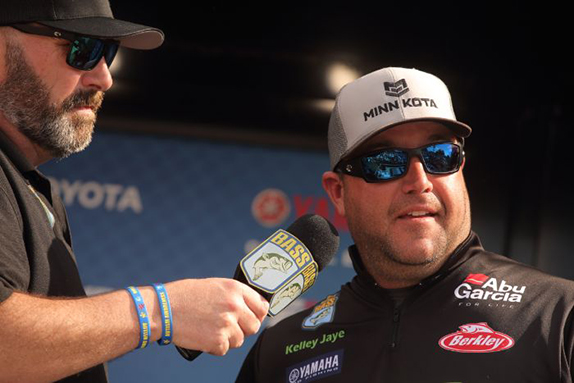 
Kelley Jaye was reliant on a jerkbait throughout the tournament.

Kelley Jaye figured he was in prime position to make a run at his first Elite Series title after piling up nearly 21 1/2 pounds on day 1. He knew the water had fallen considerably prior to the start of the tournament, but his jerkbait pattern seemed to be immune to the impact it had on others who were focused more along the bank and shallow over.

He’d fished the same area a year ago and finished 11th. When he checked it during practice this time around, he caught 17 pounds with relative ease.

“It was back in a creek where a bay opened up in the creek,” he said. “There’s a channel swing near the bank and those fish can pull up on the reeds and spawn or drop back into the ditch. It just holds a number of fish and some big fish.”

Indeed it did. In addition to the 9-02 Jaye caught there on day 1, he knows of an 8- and 10-pounder that were caught there during practice as well. He’s just disappointed the big fish didn’t fire on the final day when he scrambled to catch a 6-pound limit.

“I’m surprised that it got worse because we all thought Monday would be the best day,” he said. “It turned out to be the worst. The tide had everything to do with that. We hit it awful, but to start out with 97 points and just seven tournaments left feels good. Usually, you get one mulligan and I’m gonna keep mine in my back pocket as long as I can and see if I can make that Classic.” 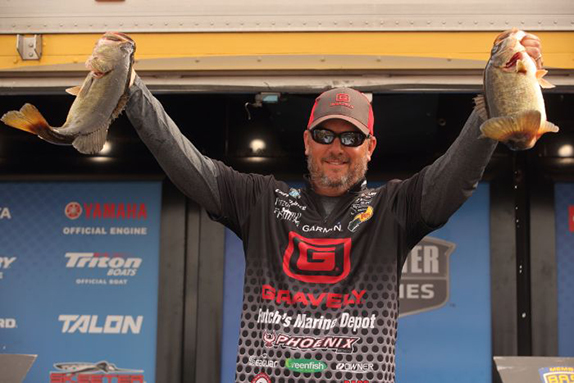 Cliff Prince joked on stage during the final day weigh-in that in light of the Lake Chickamauga Elite Series being cancelled that the top 10 after day 3 of the St. Johns event should return to the water and compete for a fourth day.

The way Prince’s tournament was going, he may have been the biggest beneficiary of an additional day of competition. The Palatka native with decades of experience on the St. Johns system saw his weights jump each day despite not connecting with any bass over five pounds during the event.

He said the most surprising aspect of the tournament was how much got pushed out of the river prior to the start of the event.

“It wasn’t the cold, but it was the wind that blew all the water out of the river,” he said “When I saw 20 miles an hour out of the south, I knew these boys would be in for a shock. I thought they’d come to me and they didn’t. I knew it would be tough fishing, but didn’t realize it would be that tough on me.”

He said practicing for a tournament on his home waters has gotten more challenging over the years. Memories of areas that held fish sometimes cloud his decision making.

“It’s gotten worse every time,” he said. “I fished here for 30 plus years and I have so many ideas I was studying the weather two weeks prior to practice. Everything changes day to day here. I didn’t go five miles north or south from the ramp and I burned 45 gallons of fuel. That should tell you how much running around I did.”

All of his fish on days 1 and 2 were caught cranking main river shell bars. His initial plan was to compliment that with sight-fishing, but the low water deep-sixed that.

“The beds from practice were high and dry,” he said.

On day 3, he flipped a stretch of trees in Lake George with a soft stickbait to catch his biggest bag of the event and climb into the top five.

“I had to wait for the tide to get right where I’d been catching them and when I went to that, I didn’t get a bite,” he said.”I figured the only good thing was that I couldn’t fall out of the top 20. I thought about that stretch of trees where I’d caught them 25 years ago. The wind was right and I just went there on a whim.” 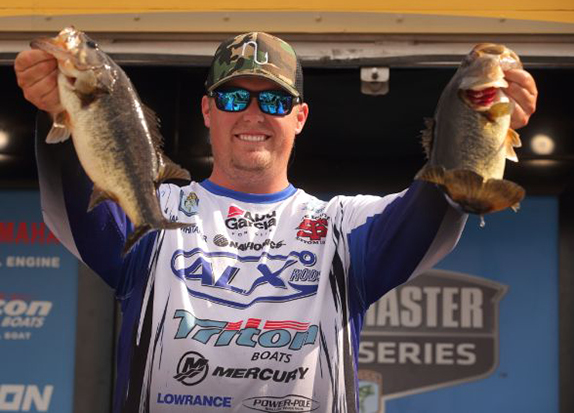 
Jake Whitaker camped in canals after his practice game plan fizzled out.

Jake Whitaker built his tournament game plan around fishing a wacky rig around docks on flats around Lake George.

“It’s just a confidence bait in the spring any time docks are involved,” he said.

When the water dropped out in the days between practice and the delayed start of competition, conditions changed where Whitaker had intended to fish.

“The (full) moon had a big effect on it because the water got pushed out with the (cold) front,” he said. “The moon never let that water come back in and the fish couldn’t move up. Nobody saw that coming.”

After three days off the water, it was a rude awakening when he arrived at his first spot last Saturday.

“I went to the stretch of docks where I had bites and there was a lot less water there,” he said “I tried to push along, but by 1130 a.m. I had not had a bite, so I made the change into the canals and lucked out. If it wouldn’t have been for the water falling, I probably would’ve caught my fish on main lake docks and not in the canals.”

He collected 16-12 within 90 minutes on day 1 and bagged another 16 pounds in the same area on day 2 to put himself in contention for the win entering day 3. The canal bite was much slower on the final day and he wound up with 8-02.

“I thought I could get a few quality bites in the canals I was fishing,” he added. “I was really hoping to get two or three rather than catch a limit because two or three five-, six- or seven-pounders like I had the days prior would’ve been a great bag. It just didn’t pan out.

“I hunkered down. The only way I was going to win the tournament was in those canals. I had nothing else to go to from practice.”