BACK
Loved A Funny Story 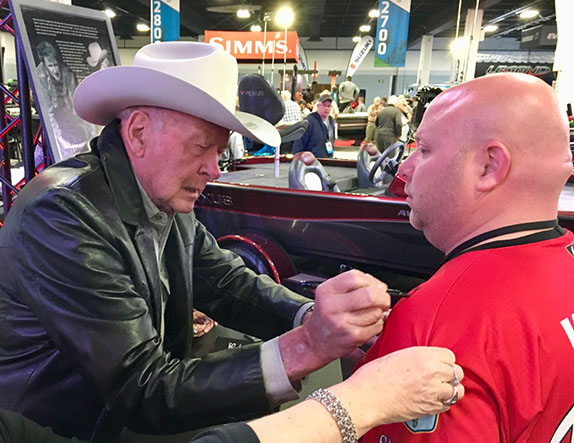 Forrest L. Wood had a longstanding reputation for treating everyone he met with courtesy and respect.

An uncanny ability to recall the names of people he'd met only briefly a year or more earlier. An affinity for sweet-tasting foods such as watermelon and ice cream. A love for a funny story, whether he was the teller or a listener.

Those were some of the traits that Hall of Fame anglers recalled about Forrest L. Wood in the days immediately preceding his funeral on Wednesday. Some of them had relationships with the Ranger Boats founder dating back to the 1960s, and they endured through the decades whether they were running his products or not.

"He was a giant in this industry and he had no enemies," said Bill Dance. "Nobody who ever met him ever forgot him. I just loved Forrest to death."

Dance saw Wood for the final time last fall, when he was passing through Cotter, Ark. (about a 10-minute drive from Wood's home in Flippin) and arranged to meet him for a quick lunch. Their get-together extended past the three-hour mark.

Wood apologized profusely for eating a giant bowl of ice cream in front of his longtime pal – Dance was prohibited from indulging in such treats due to a heart procedure he'd undergone earlier in the year.

"The ice cream industry is going to go on the minus side without Forrest around," Dance said. "I'm just so glad that I was able to stop and have that visit with him. He was the kind of guy who never liked to talk about sad things. We had so many good times together and I just can't say enough good things about him."

Following are some reminiscences about Wood from other legendary anglers.

"Back in 1968, my dad was guiding a little bit and he had a good friend who was guiding a little bit and one day they loaded up in the car to go to Flippin to see some guy in a big cowboy hat who was going to show them a new boat. They came back with one, and then about two weeks later my dad went back up there and bought another one, and I met Forrest shortly thereafter. Those were the very earliest days of Ranger Boats – dad's friend's boat was number 19 or 20 and dad's was 24 or 26.

"I did a lot of appearances around the country with him at different seminars and openings for dealerships. He taught me a lot about how to treat people and follow through on things you'd promised. He kept a notebook in his shirt pocket so he wouldn't forget what he'd told somebody he was going to do.

"I drew him in a tournament one time on (Sam Rayburn Reservoir) and he was kind of under the weather. About halfway through the day he decided he'd sit down and have a little lunch and maybe he'd get to feeling better. I caught two fish while he was getting it unpacked and he packed it right back up and didn't have a bite.

"He was a very good competitive angler, which is something I felt like he never got enough credit for."

"He was always asking me about my watermelon crop because that was something he really loved. Every time we'd have a Classic I'd bring him one and that was an ongoing thing for a long time. If we were both going to be at a show somewhere, I'd bring him a couple of them. He'd always call me up later and tell me how good they were.

"He had a huge role in the growth of fishing, the way he promoted it and just the kind of guy he was. He was one of those people that even if he wasn't feeling good, he was always happy and smiling and in a good mood. He was extremely friendly and his memory was unbelievable – he'd remember people's names that he'd just met for five minutes a year or two before. That just blew me away because a lot of times I can't remember people I met last week."

"I knew him for 40 years. He was my number 1 sponsor and the nicest man I ever met. He was a true gentleman and a Christian and he treated everybody equally whether you were dirt-poor or a multi-millionaire.

"I remember one time he came down and stayed at my cabin to go duck hunting. We'd gotten up from our naps and he was sitting out on the porch and there were just thousands of ducks out in the fields. He said 'You know George, I've been paying attention to these ducks and they're a lot like people. Some are coming, some are going and some are just flying around in circles with no idea what they're doing.'"

"I met Forrest in 1968 at the second or third tournament B.A.S.S. ever had at Lake Eufaula. I was just a kid and I was leading after the first day – I had 11 fish for 52 pounds and something. People paid a little attention to me because I was leading, so I met him a little earlier than I maybe otherwise would have. He talked me into buying a Ranger that fall.

"One of the things that tells the story of his integrity involved that first Ranger. We had a lot of new lakes that had trees and stumps back then and running around in them, I'd knocked a couple of holes in that boat and cracked the transom. I called Forrest and told him what had happened, and he told me to take the motor and the trolling motor off and bring the boat back to him. I told him I didn't have the money to get that stuff taken off – it would've cost $50 or $100 – so he told me just to haul it over there and he'd call me when he got it repaired.

"He called me two or three weeks later and told me it was ready to go, so I went over there and we went out behind the plant and he told me to back my truck up to the boat that was sitting there. I told him that wasn't my boat – mine was green and that one was white. He said no, he'd replaced the whole boat; he'd taken my motor, my trolling motor and my locator and put them on a brand new boat.

"He was struggling back then, too, and I'm sure he couldn't afford it, but he just felt it was the right thing to do. That kind of sums up Forrest Wood and what he became."