BACK
Year In Review 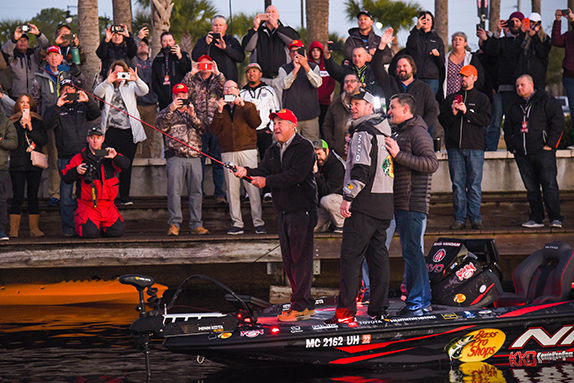 Johnny Morris (red hat) helped kick off the inaugural season of the Bass Pro Tour at the Kissimmee Chain of Lakes in Florida last January.

From start to finish, 2019 was a newsworthy year on and off the water. The first big headlines belonged to Major League Fishing’s Bass Pro Tour, which held its first tournament in January, mere months after the circuit’s formation.

BassFans were treated to virtuoso performances across all three circuits by established stars and star-making efforts turned in by a number of up-and-comers.

Off the water, plenty of news was made as well. In July, Lowrance and Garmin introduced new trolling motors aimed at taking market share away from Minn Kota and MotorGuide, which also debuted a new model. In October, the long-rumored sale of FLW to MLF was finally consummated, giving MLF a feeder system to cater to anglers at all levels of competition.

The BassFan staff has pored over the archives of the last 12 months and come up with the 10 biggest storylines of the year. As part of a two-part series that begins today, we will break each one down in terms of their significance and where they fit into the mosaic that was 2019.

Plans for Major League Fishing’s Bass Pro Tour became public on Sept. 11, 2018. Just 3 1/2 months later – on Jan. 29, 2019 to be exact – the first competitive casts were made as a new era in the tournament game was ushered in with an 80-man field comprised of anglers who had departed the Bassmaster Elite Series and FLW Tour to help launch the circuit. The Kissimmee Chain of Lakes in central Florida served as the venue for the inaugural tournament, which featured a ceremonial first cast from Bass Pro Shops founder Johnny Morris.

The event, which was won by two-time Bassmaster Classic winner Jordan Lee, kicked off an eight-tournament schedule (each spanning six days), that culminated in August with the first Redcrest championship event for the top 30 finishers in the season-long points race. The catch-weigh-release competition format – every bass weighing 1 pound or more counts – paired with timed periods and a constantly-refreshed leaderboard created countless dramatic moments, stressful sequences and gave each competitor a feeling that they were never out of it (day 2 of the season opener proved that).

Under the different format, new strategies emerged as the season evolved with certain techniques and bait types seeming to generate bites on a more consistent basis than others. Some anglers adapted swiftly – Edwin Evers and Jeff Sprague, especially – while others struggled to adjust to the frenetic pace. The eight regular-season events yielded eight different winners before Evers capped off a spectacular season with a dominant performance at the Redcrest championship.

A Classic to Remember

Once the Bass Pro Tour got off the ground, much of the attention in the fishing industry shifted to the Bassmaster Classic, the field for which was comprised of many anglers who were not competing on B.A.S.S.’s top circuit in 2019. That provided a unique backdrop for the sport’s marquee event with many of the top names in the sport potentially making their final casts in a Classic. It was, in essence, the last star-studded Classic with the likes of former Classic champs Kevin VanDam, Skeet Reese and Mike Iaconelli in the same field.

Knoxville, Tenn., and the Tennessee River served as hosts for the 49th edition of the Classic – and neither disappointed. Local officials estimated 5,500 people gathered along the bank of the river the morning of day 1 to watch the field take off and race past Neyland Stadium (home of the University of Tennessee football team) en route to fishing spots downriver. The crowds only got bigger from there as attendance for the three-day tournament, which finished on St. Patrick’s Day, was pegged at 153,800, according to officials at the various Classic venues.

Ott DeFoe had competed in seven Bassmaster Classics prior to the 2019 edition. He was a top-6 finisher in four of them, but never felt like any of them were his to lose. With his hometown of Knoxville serving as the host city of this year’s Classic and the Tennessee River being the competition waters, this was as close to a home game as DeFoe would ever see, short of a Classic at Douglas Lake. In his typically unflappable fashion, DeFoe took full advantage by posting the only 20-pound stringer on day 1, anchored by a 6-pounder, to seize the early lead.


Ott DeFoe shouldered the burden of being the hometown favorite at the 2019 Bassmaster Classic.

Jacob Wheeler, the hottest angler over the past year heading into the Classic, moved into the lead after day 2 with a 17-11 bag while DeFoe slid back to fourth, just 2-01 behind Wheeler. It set the stage for one of those storybook comebacks by the hometown favorite. DeFoe delivered an 18-04 stringer on the final day and finished with 49-03 to capture the Classic victory at a packed Thomson-Boling Arena.

DeFoe became the fourth Classic winner in the past six years – and fifth overall – to win the event in his home state.

Few people have meant more to the growth and popularity of tournament bass fishing and bass fishing on television over the past 50 years than Irwin Jacobs and Jerry McKinnis.

Jacobs, who came on the scene in the mid-1990s after making a fortune and acquiring a reputation as a “corporate raider”, transformed Operation Bass into FLW Outdoors and built a tournament organization that served anglers at all levels. At the same time, he wasn’t bashful about using it as a marketing engine to sell bass boats built by the companies he owned, most notably Ranger Boats.

He injected big money into a sport previously dominated by B.A.S.S. and forced B.A.S.S. to revamp its tournament program and payouts. Six-figure prizes for winning became commonplace during the Jacobs era and two $1 million payouts – to the winners of the 2007 and 2008 Forrest Wood Cup – occurred under his watch. He also popularized Fantasy Fishing, giving fans another reason to follow the sport, especially FLW events.

Jacobs passed away last April in a murder-suicide event involving his wife at the couple’s mansion in Orono, Minn. Jacobs and his wife, both 77, had reportedly been suffering from severe and debilitating health issues.

Jacobs’ influence also was seen on the TV side of the sport. In an effort to create more fast-paced programming that fans would relate to, he hired McKinnis and his Arkansas-based production company JM Productions. Together, they launched the FLW Tour in 1996. By the time Jacobs and McKinnis teamed up, McKinnis had already become a pioneer in the outdoors television space.

McKinnis was a giant in the outdoors- and fishing-themed television world. Whether it was producing content or offering on-camera analysis, McKinnis had a hand in countless programs, including the Bassmaster Elite Series television shows. His popular show The Fishin’ Hole became a central part of ESPN’s outdoor programming and when it went off the air it was the second longest-running show on the network behind SportsCenter.

McKinnis, who later was a co-owner of B.A.S.S., passed away in early November at the age of 82 after being hospitalized with an injury and infection suffered on a fishing trip to Wyoming. 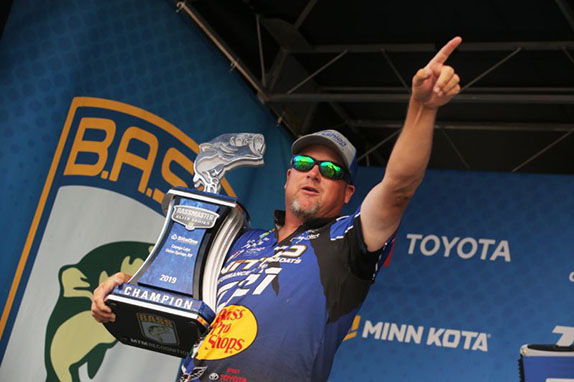 
After winning at Lake Guntersville last June, Jamie Hartman captured another Elite Series win in his home state of New York, where he prevailed at Cayuga Lake.

Brandon Cobb and Jamie Hartman both cleared more than $275,000 in earnings on the Elite Series in 2019, thanks largely to each winning a pair of derbies. It was the second time in Elite Series history that two anglers won two events apiece in one season.

Cobb, who’d developed into a rising star on the FLW Tour prior to moving to the Elite Series after the 2018 season, had a dynamite first half with victories at Lake Hartwell in his native South Carolina and then at Lake Fork, which hosted Toyota Texas Fest. Cobb, who landed this 11-01 behemoth on day 3, cracked the century mark en route to his win at Fork.

Hartman, meanwhile, struck gold at Lake Guntersville, where he pulled off a 10th-to-1st rally on the final day, and Cayuga Lake in his native New York as he continued his rise to stardom after undergoing season-ending back surgery in 2018.

Hartman, who famously stashed all of his belongings in a storage unit prior to launching his Elite Series career in 2017, wound up 17th in the points standings and will be in the field – along with Cobb – for the 50th Bassmaster Classic at Guntersville come March.