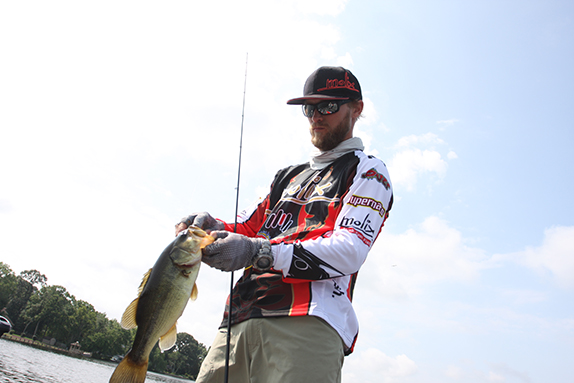 James Elam got several other Bass Pro Tour anglers involved in a fantasy football league this year and wasn't surprised at how competitive it got.

(Editor's note: BassFan will suspend feature publication during the holidays as it does each year, although important breaking news will still be reported. The staff wishes everyone a joyous holiday and we'll be back after New Year's.)

A few years ago, James Elam thought the whole premise of fantasy football was foolish. When some of his friends in Oklahoma approached him about being in a league, he wasn’t sure what he was signing up for.

“I thought it was dumb,” Elam recalled. “They got me into a league that they’d had going for a while. I remember my girlfriend dropping me off at the draft party and thinking, ‘What am I doing here?’”

To welcome him to the league, Elam’s pals awarded him the first and third overall picks in the keeper league draft, a format that allows owners to keep certain players on their roster from one season to the next. He selected then-Patriots tight end Rob Gronkowski then chose Rams running back Todd Gurley. Neither pick panned out that well, but Elam’s first go around as a fantasy team owner wasn’t the miserable experience he figured it would be.

He came back strong the following season and won the same league while also participating in two other leagues. Last year, he came up empty with the four teams he ran. So much for it being dumb, eh?

“It’s a sport I like and it’s something different that connects you to the sport,” Elam said.

“Bertrand was amped up to play this year and said we ought to start a fishing league,” Elam said.

The Dropshot Cup championship played out last weekend during Week 15 of the NFL season between Meyer’s “Team Meyer” and Elam’s “Cody Meyer’s Dropshot” squad. It was a showdown of the two division winners, and it wound up being the highest-scoring matchup of the season with Elam prevailing 172.96 to 169.34.

As he had for most of the season, Elam relied on the production of the running back tandem of Christian McCaffrey (Carolina) and Chris Carson (Seattle) in the finals as they combined to score 64.20 points. Meyer was led by wide receiver Julio Jones’ 38.40 points.

“It felt really good,” Elam said. “I did my homework and research and it paid off. I really wanted to beat Lucas and Meyer.”

Prior to the finals, Elam and Meyer agreed to split the $1,000 down the middle.

New Experience For Most

Elam began gauging interest among other anglers in forming a league at the BPT Redcrest championship. He wanted to make sure those who committed would actually participate for the whole season. Lintner, whose previous fantasy football experience stemmed from co-owning a team with a friend who works at Tackle Warehouse, was on the fence until he learned one particular angler was involved.

“I said, ‘Wait, I have a chance to take out Lucas,’” joked Lintner, who committed on the spot.

Lintner admits he’s been a passive football fan and only knew some of the players’ names from watching SportsCenter. Meyer hadn’t played fantasy football in several years. Many others, including Lee, were doing it for the first time and it didn’t take long for the competitive side of everybody to shine through.

“It was fun to compete against the same guys you normally do at something other than fishing,” said Lee, whose Birmingham Beetlespins team finished mid-pack with a 6-6 record. 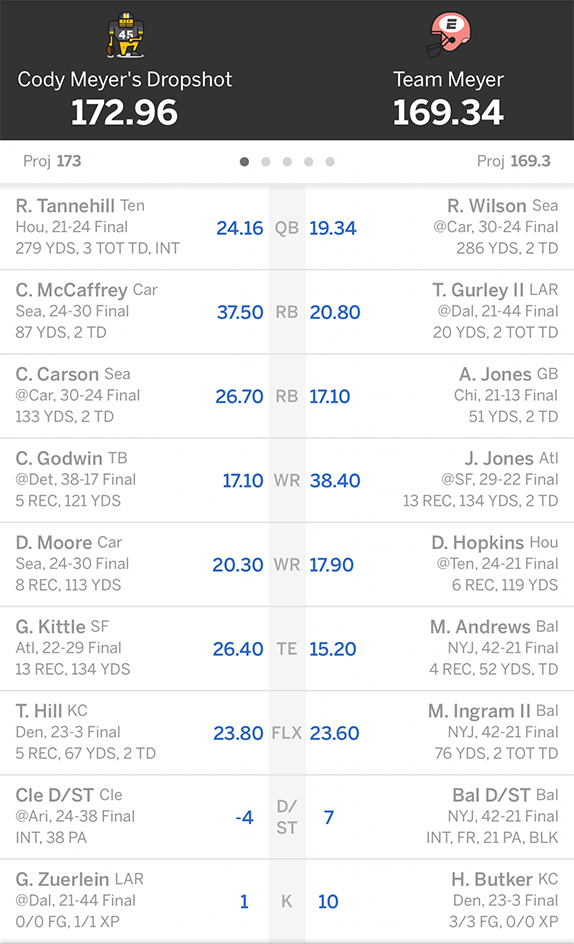 Lintner said he relied on his son, JC, who’s a college freshman, for help setting his lineup each week.

“He’s been in leagues before and we talked once or twice a week about the team, so that part of it was really cool,” Lintner said.

As the de facto commissioner, Elam said it was interesting to watch how his fellow BPT competitors managed their teams through the season. It brought out another layer of their competitive side, he said. They tinkered with lineups much like they experiment with tackle tweaks. Some sweated over whether a waiver claim would go through or if a trade proposal would be approved or vetoed.

“We’re all competition junkies, whether it’s watching paint dry or fantasy football or fishing,” Crochet said. “We’d play for a nickel just for the sake of winning.”

The draft strategies of the anglers varied as much as their fishing styles. Crochet, for instance, loaded up on players from his beloved New Orleans Saints – he drafted running back Alvin Kamara first overall – and where appropriate he tried to fill in with players who attended LSU.

One thing that became evident as the season wore on, according to interviews with several team owners, was that Lucas took the competition just as seriously as he does fishing, maybe more. His intensity created a fun atmosphere for the other owners when their teams squared off.

“I’d enjoy beating Justin Lucas at anything because he’s an intense dude all the time,” Crochet said. “I don’t know if people can see that because of the California cool ‘Hey, bro’ stuff. Plus, he’s skinny and all that. He’s just an intense dude.”

Lintner recalled encountering Lucas at the ramp after a day of competition at an MLF Cup event in the fall. Their fantasy teams happened to be playing each other that day.

“I’m unloading my boat and Lucas comes up talking smack to me and I’m like, ‘Really, dude,’” Lintner recalled.

Lintner eventually got the last laugh when he eliminated Lucas’ team in the first round of the playoffs.

When it became clear his team was going to be eliminated by Lintner’s “Team Stache” in the playoffs, Lucas reacted like many first-time owners: He deleted the app before the matchup was final.

He estimated investing up to three hours each week researching matchups and depth charts and injury reports to create his lineup. On Sundays, he’d be glued to the television and his phone, refreshing the league app for the latest scoring updates.

“Sundays were not very fun here for a few weeks,” he joked. “It gave me unnecessary anxiety, but it made it fun to watch the games. I never thought I’d be on my knees hoping that Younghoe Koo [Atlanta’s kicker] would make a field goal.”

When asked if he plans on participating in a league next year, the former B.A.S.S. Angler of the Year said the wounds from this season are still too fresh.