BACK
Finally Has A 'Real' Home 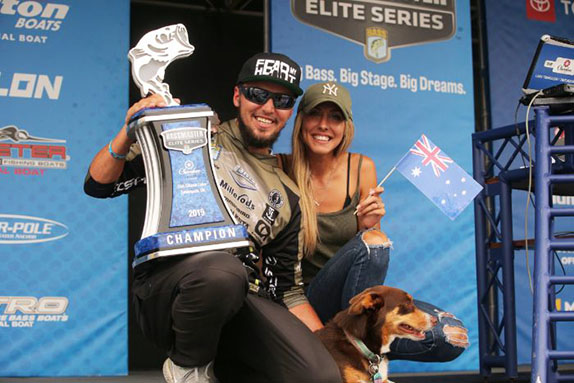 Carl Jocumsen's victory at Lake Tenkiller made it possible for he and new wife Kayla to purchase a home in Tennessee.

After nearly a decade as a true bass-fishing nomad, Carl Jocumsen finally has a home in the U.S. that he can call his own.

"A lot of good things have happened recently," said the 35-year-old native of Australia. "It's been the best few months of my life."

The first part of 2019 wasn't real good to him – from a professional perspective, anyway – as he struggled badly through the initial half of the Bassmaster Elite Series campaign. The latter portion was full of highlights, though: a victory at Lake Tenkiller, his marriage to the former Kayla Palaniuk (Brandon's cousin) and the purchase of his new digs in Graysville, Tenn., just a 15-minute drive from one of the major boat launches at Lake Chickamauga.

"It's a big shop with living quarters on the side of it. It backs up to a little mountain lake, about 35 acres, that's been managed to take out the smaller fish and leave the big ones.

"There are giants in there."

The Jocumsens wouldn't be enjoying their new home this winter if not for Carl's triumph at Tenkiller in the regular-season finale.

"We found the place six months ago, but we couldn't come up with the money for the down payment," he said. "The owners came back with some other financing to try to help us and we went through the whole thing again, but a week before Tenkiller we had to tell them that we still couldn't do it – it wasn't possible with the season I'd had. Then I called them on the Monday after (his win) and told them it was on again.

"In a roundabout way, I guess it was just meant to be."

Since coming to America in 2011, he's gotten mail at residences in numerous different states, often sleeping in the guest room at the homes of fellow anglers or others affiliated with the sport. He spent many, many nights in a Lance camper affixed to the rear of his truck.

"The entire time I've been here I've never had a place where I could unpack and get my tackle sorted. Now I'm going as hard as I can every day, getting things ready for next year. In the past everything's always come down to the last second – I'd be breaking my boat in right before the first tournament and it was just a madhouse. This year I had my boat in my own shop, rigged and ready by the end of November, and I've been ordering tackle and getting everything in order. It's going to make a huge difference in the end.

"We love it here," he continued. "We've got four acres that backs onto the lake and we're on the last (parcel) on our road, so no one drives past us. We basically don't have neighbors."

He hasn't caught any monsters from the little impoundment yet, but the first day he fished it, his cousin visiting from Australia had a shot at two just a few seconds apart.

"He hooked one that was a legitimate giant – when it boiled near the top I said 'this is a 10-plus.' It came off and we didn't get to see it, and the jig came to the top and one that was at least 10 ate it right next to the boat. He had that one on for about 15 seconds before it got off.

"I've fished it quite a bit now and I've caught a bunch of fish, but I haven't seen size like that since it's gotten cold."

Jocumsen's win bumped him up to 57th place out of 75 anglers on the final 2019 points list. In five seasons as a pro (three on the Elite Series, two on the FLW Tour), he's yet to qualify for a championship event.

He believes that one of the residuals of his first win will be greater consistency in the future.

"I've always enjoyed the journey and I know the process and I've always understood how lucky I was to be doing this, but trying to get that first win always felt like a big weight on my shoulders – was it ever actually going to happen? I had so much belief and so much hope and I knew I had a strong work ethic, but certain thoughts start to creep in.

"Now if I have a bad tournament it won't affect me as much as it used to. Nobody can ever take that win away from me and it's given me a different attitude toward a lot of things and it's only going to help me. For the last nine years I've fished every tournament to win without thinking about the Classic or the points or anything else, and it's resulted in some bad finishes.

"I always knew that a win would do a lot for me mentally and now I feel like I can relax and fish a different style, and I think that will help with staying up there in the points and being more consistent. It's going to be interesting to see the results because I've got a different mindset than I've ever had." 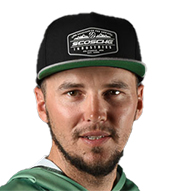