BACK
Execution Needs To Improve

Hudnall Ready To Put ’19 Behind Him 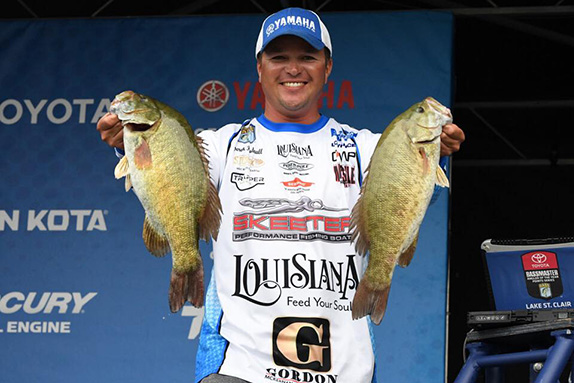 Derek Hudnall is anxious to turn the calendar to 2020 and get the new Elite Series season started.

When looking back over the 2019 Bassmaster Elite Series season, Derek Hudnall has two options.

He can reminisce about the consistency he displayed as a rookie on the circuit, racking up four top-35 finishes and no results worse than 53rd. Both respectable accomplishments.

Or he can dwell on the what ifs surrounding his disqualification from the Lake Hartwell tournament due to an unintentional violation of the off-limits period rule that ultimately sank his hopes of qualifying for the 2020 Bassmaster Classic.

It’s a tortured spot to be in. Does he celebrate the high points or rue the mistake that derailed one of his primary goals? The answer, frankly, is both. As much as he enjoyed the successes and holding his own against the stiff competition, it has been hard to wall off the self-inflicted misstep that cost him a shot at the Classic.

With an eye toward the 2020 season, Hudnall is ready to move on from it all, ready to wipe the slate clean and start fresh.

“At the end of the day, I don’t want to be known for my worst failure. I want to be known for my successes and that’s my goal for 2020,” he said. “I had a chance at a Cinderella story and it was great to have everybody rooting me on, but at the start of the season my goals were to compete for Angler of the Year and fish the Classic. I didn’t achieve either. From a professional aspect, it was a failure. On the other hand, I gained some good publicity, which was good for those who support me.”

Indeed, despite missing an entire tournament, Hudnall qualified for the season-ending AOY Championship, where he finished 40th, resulting in a 48th-place finish in points.

“I made it interesting at the end,” he said. “If I put one fish on the scale at Hartwell, I make the Classic.”

Hudnall’s general view of his rookie season was a “glass half-full” one, but he sees areas where he hopes to improve in 2020.

“I didn’t bomb any this year,” he said. “I’m not surprised, but at the same time if before the season someone had told me my worst finish would be 53rd and even with a zero, I’d still make the AOY event, I’d say, ‘Right on.’ I had opportunities to do more.

“At some events, I had terrible practices and there were a couple events I should’ve done well in. Those stick with me. All in all, I can’t be that happy.”

He said better execution and more experience next season will be keys to converting those middle-of-the-pack finishes into top half results.

“I made some vital mistakes, especially at the smallmouth fisheries, with landing them,” he said. “I love catching them, but execution and landing them is just as important as finding them. It’s something I’ve gotten better at.”

He pointed to day 1 at the St. Johns River as a day where execution errors cost him dearly. If not for losing “a couple giants,” he may have been leading the event that day. More miscues at the St. Lawrence River, especially on day 3, still stick in his craw.

“I’ve never been so disappointed to weigh in 18 pounds in my life,” he said. “I lost that seven and two in the 5-pound range. It was a good chance to make a huge jump. It came down to executing and my lack of experience on a body of water like that. Those fish are a different breed. You have to take your time. If you rush it, you’re going to lose ‘em.”

Hudnall’s rule infraction occurred while he was in South Carolina in early March. He’d planned to visit Hartwell before it went off limits, then spent a couple days at Winyah Bay before heading to Knoxville for the beginning of Classic practice. He fished Hartwell March 2 and 3, but flooding at Winyah Bay at that time prompted him to scrap that leg of the trip. As a result, he stayed at Hartwell for another day of scouting on March 4.

That evening, while chatting with a fellow Elite Series angler, Hudnall realized the 28-day off-limits period for Hartwell began on March 4. His mistake was factoring the 28 days from the start of competition rather than the start of official practice, as stated in the B.A.S.S. rules. Hudnall self-reported the rule violation to B.A.S.S. officials and he publicly revealed his mistake in a video posted to his Facebook page on March 7.
https://www.facebook.com/DBHFishing/videos/269100457320268/

He accepted the punishment of disqualification from the Hartwell tournament, but he tried to not let it overshadow his experience at this year’s Classic, . Ultimately, he turned a public and embarrassing moment into a positive.

“When it happened, I didn’t view it like that, but the first thing that came across my mind was I need to make it right,” he said. “I went on social media and explained it and apologized. B.A.S.S. shared it. I wanted to be the first to put it out there.”

He also didn’t want to sit at home during the Hartwell event and stew about his mistake. He offered to assist B.A.S.S. in any way he could at the event and wound up serving as a media boat driver.

“I wanted to be there and be part of the event,” Hudnall said. “I’d spent a good number of years trying to get here. I’ll be damned if I let something like that get in the way.”

In fact, at the pre-tournament angler meeting, Hudnall said he received an unsolicited compliment from a fellow angler that resonated with him.

“Rick Clunn taps me on the shoulder and shook my hand,” Hudnall recalled. “He said, ‘You’ve gained more of my respect than you would’ve by winning three of these tournaments by doing what you did. I’ve been in your shoes before and had to self-report myself twice.’ I didn’t know Rick from anybody, but when he said that it made me feel good.”

’These are the Right Guys’

From a broader standpoint, the total Elite Series experience, on and off the water, far exceeded Hudnall’s expectations.

“It was two-fold,” he said. “At the Classic, we all knew the changes were coming, so fishing that event with all of those guys was special. The Elite Series was a big unknown from the start. We had a lot of new faces, but I fished the Opens full-time for three years trying to qualify. Getting there was my goal from day one.

“On the water was the biggest thing for me. In the Opens, you’re up against 200 guys so being on the water can be a bit frustrating with people scout and how they fish in those tournaments. I was impressed with how well we fished around each other (this year).”

He pointed to the Lake Fork Texas Fest where he and Mark Menendez and Brian Snowden were all visiting the same cove at roughly the same time of day.

“There were three distinct areas all connected to each other,” he said. “On days 1 and 2, it was all good and on day 3, nobody tried to come in on anybody. That was when I said, ‘These are the right guys.’ That’s how it should be. Everybody respects each other as individuals.

“As a whole everybody respects each other. Going back to the kickoff meeting before the season, there was nothing negative. The morale and spirit were high going into it, including the B.A.S.S. staff. They were maybe more motivated that even we were.”