BACK
Still Learning The Ropes 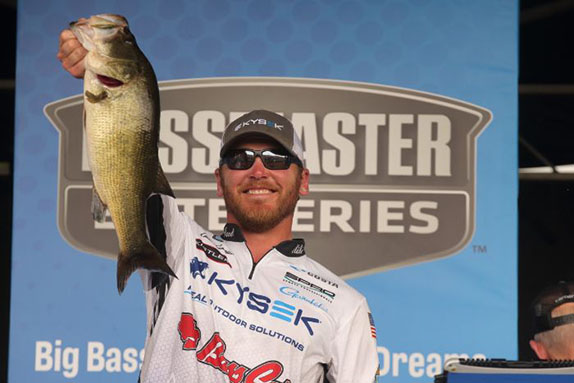 Caleb Sumrall said he's anxious to get back to Lake Guntersville for the 2020 Bassmaster Classic after finishing fourth there last June.

It’s approaching 1 o’clock on a Thursday afternoon in November and Caleb Sumrall is hard at work, sleeves rolled up, wrist deep in the processing of an eight-point buck he harvested earlier in the day. There’s no time to waste.

“Skinning him as we speak,” Sumrall says with a slight Louisiana twang. “Us Cajun boys don’t play. When there’s meat on the ground, it’s on.”

As he learned over his first two seasons as a competitor on the Bassmaster Elite Series, pro anglers don’t play, either. When there are fish to be caught, it tends to be “on,” no holds barred. That’s why Sumrall had to speed up the learning process as he assimilated into B.A.S.S.’s top circuit over the past two seasons.

After winning the B.A.S.S. Nation national championship in 2017, Sumrall has dedicated himself to pursuing a career as a full-time pro angler. So far so good, he says. He took some lumps as a rookie in 2018, but he came back this year more determined to prove himself across the spectrum of venues.

He didn’t crack the top 40 in any of the first three events in 2019, but then got on a roll with seven consecutive top-40 finishes to close the year, including a pivotal four-event stretch where he finished 24th or better in each. The end result was a 21st-place finish in Angler of the Year points and a ticket to the 2020 Bassmaster Classic at Lake Guntersville next March.

He said it was hard to attach a theme to his sophomore season, but he came away satisfied that he built on what he learned from his rookie year.

“I can’t be happier with how it went,” Sumrall said. “You always want more, but I showed I have what it takes to do this for a long time, and that’s all I want. I want to make a solid career out of this.

“It’s been a giant learning curve because I had never done anything like this up until after I won the Nation title. I was just a guy who worked in the oil field. That was all I knew.”

When he was laid off from his oil industry job in August 2017, it opened the door for him to pursue a career in the fishing industry.

“Whenever I do something I’m all in,” he said. “Same with this. This is my passion. I have the support of my family and I know I cannot be successful without that.”

Sumrall is a Louisiana native, so shallow-water techniques comprise the backbone of his fishing pedigree. He knew he had to expand his repertoire in order to compete on the Elite Series. For instance, he’s made great strides with a spinning rod in his hand, finishing 18th at the St. Lawrence River this year versus a 58th-place showing last season.

“Being from south Louisiana, you can’t learn all the techniques you need to be good on the Elites,” he said. “Aside from using our electronics, you have to be good shallow and deep on the Elites, and not just okay. You need to be good. There are still a bunch of techniques I’m not very confident in, but I can get by. Dropshotting for smallmouth is not my strong suit, but I feel I can go to a smallmouth fishery and not finish dead last.”

Aside from the physical learning curve, he’s also tried to be a sponge when it comes to his decision-making process and formulating a strategy. He said just following his instincts has been the number one lesson he’s learned so far.

“I’m getting more comfortable with my decisions on the water,” he said. “Before, I’d be my own worst enemy. When I needed to make adjustments, I made it but then I wouldn’t trust it. I’d give it a while and then run around and eventually spin out. I did a lot less of that this year.

“I’m learning every event. I can’t say have a lot of experience, but I learn lessons quick. I try to take something from each event and as long as I can hold onto that mindset, I don’t feel like I’ll be left in the dust. I have to keep learning.”

Sumrall missed the day-3 cut at the St. Johns River, Lake Lanier and Lake Hartwell to start this season. After three derbies, he was 67th out of 75 anglers in the AOY points. Not exactly where he wanted or expected to be.

“I knew I had to turn it around if I wanted to make the Classic and be where I wanted to be,” he said.

Then came the Winyah Bay tournament. He’d practiced in the Cooper River, but opted against making the long run on day 1. He wound up with a limit weighing 7-11, which put him 45th on the leaderboard. Knowing that wouldn’t cut it two days in a row, he fished the Cooper on day 2 and bagged 13-07 to jump up to 16th place, earning his first day-3 cut of the year.

The key to that day – and his season, he says – was the 5-13 kicker he caught on a vibrating jig around a grass bed.

“That one fish turned it all around,” he said.

He caught 12-02 on day 3 and wound up 11th, missing the top-10 cut by eight ounces. That result and the accompanying good vibes touched off an impressive rally that carried through the Lake St. Clair AOY Championship.

Two months after Winyah, he finally broke through and grabbed his first Elite Series top-10 finish at Lake Guntersville. It was another eye-opening experience.

“That’s where I first learned that catching them four days in a row is not easy, especially when you’re on the same pattern,” he said. “I didn’t have a lot of areas so fish management was another good lesson.

“I’ve never had more fun in an event than I had there. There was a big ledge going on there and that’s what you do on the Tennessee River that time of year. I was finding schools, but also matted grass and I like to flip, so I did the flipping thing.”

He caught a few decent fish in practice and opted to go that route versus chasing the ledge fish.

“I stumbled on day 2, but I was catching 50 to 60 fish per day and culled through so many non-keepers to get to the 4-plus pounders,” he said. “It showed me I can hang with these guys and when it’s meant to be, it’s meant to be. I had a blast there, catching them how I catch them at home.”

It might be a different story come March when he and the rest of the Classic field return to Guntersville for the 50th Classic. This will be Sumrall’s second Classic appearance and much like his Elite Series experience, he’ll be better prepared this time around.

“I think I’ll be better prepared with dealing with the attention and getting pulled away from the tournament,” he said, recalling his memories of the 2018 Classic at Lake Hartwell. “I had the jitters a good bit. I’m ecstatic, though. I feel like everybody can catch them and that might be the problem. I don’t care for slugfests too much.

"It could be anybody’s ball game, but I like grinders because that’s all we do in Louisiana. I feel like a lot of people will catch them so it won’t be tough at all. I’m excited.”