BACK
St. Lawrence Was High Point 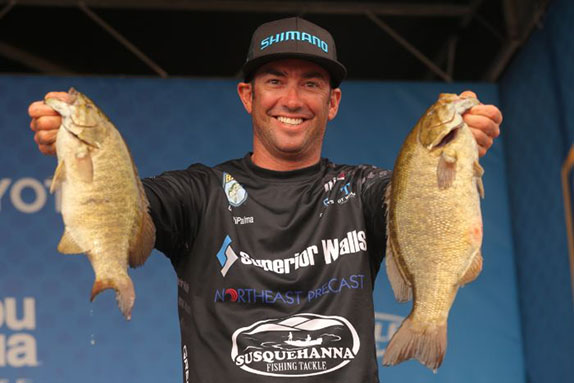 Greg DiPalma endured a number of setbacks during the season, but still managed to qualify for the 2020 Bassmaster Classic.

Greg DiPalma’s rookie season with the Bassmaster Elite Series was one to remember and one to forget at the same time. Ultimately, though, it was an experience he wouldn’t trade for anything.

The New Jersey native, who qualified for the Elite Series via the Eastern Opens last year, overcame numerous hardships that cropped up over the course of the 2019 season to finish inside the qualification line for the 2020 Bassmaster Classic. His season was a study in resilience above all else as he tackled a slew of fisheries he’d never seen before while enduring an almost staggering series of obstacles that bordered on the absurd when they’re laid out in succession.

> In April, the compressor in DiPalma’s late-model outboard gave out on day 2 of the Winyah Bay tournament, an event he came into with as much confidence that he could contend for the win as any he can remember.

> On the way to Lake Fork for Texas Fest three weeks later, he struck a deer with his truck, rendering it undrivable and forcing him to rent a truck to finish the trip.

> While competing in the Chesapeake Bay BFL in late May, the new, replacement outboard suffered irreparable damage after another mechanical failure. Subsequently, he finished the season with a third different outboard.

> At the Lake St. Clair AOY Championship, his bilge pumps malfunctioned on day 1 and caused his boat to take on so much water that he had to bail water manually before limping back to the launch ramp with no fish in his livewell.

At every turn, though, DiPalma forged ahead in his dogged pursuit of a berth in the 2020 Classic. Through it all, he managed to finish 39th in points to cement that Classic berth.

“I’ve been trying to do this my whole life. Nothing was going to stop me,” he said.

While he did log three top-35 finishes, DiPalma felt that the steady stream of hardships prevented his on-the-water performances from lining up with the kind of angler he is and expects to be.

“I do feel like I didn’t show out personally because the theme was ‘What didn’t I break,’” he quipped.

Outside of Comfort Zone

A frequent competitor in the Bassmaster Northern Opens prior to B.A.S.S. shifting to a two-division format, DiPalma had grown used to cycling through the same fisheries every few years. With his move to the Elite Series, that familiarity went out the window. The only venue on the 2019 schedule that he had experience at was Cayuga Lake in central New York.

“That was the biggest learning curve because every lake has a little something different,” he said. “I’m versatile with baits, but the challenge was applying that versatility very fast because you had to in order to adjust.”

Another aspect of the Elite Series schedule DiPalma actually preferred was the prevalence of back-to-back tournaments. There were three such sequences this season and while it made packing a challenge in some instances, he liked getting into fish-catching mode for two weeks at a time.

“I prefer doing it like that,” he said. “The more time you’re in tournament mode the better. There were a couple times I’d come home and go to a local tournament and it’d be second nature.”

It also put to the test his organizational skills and making sure he was packing what he needed.

“I like to be very organized,” he noted. “I’m pretty cut and dry with where I’m fishing, but I had to plan a lot to make sure I could practice with a clear frame of mind and be as efficient as possible. I have a pretty good system and it was a matter of breaking down what would be the deal at every tournament. Some were largemouth tournaments, then a smallmouth tournament, so I had to plan out the best I could and not overwhelm myself.”

Amidst all the obstacles he faced, DiPalma turned in two of his best showings at Lake Guntersville and the St. Lawrence River to catapult himself into contention for a Classic berth. Following consecutive 45th-place finishes at Winyah Bay and Lake Fork, he finished 18th at Guntersville and 8th at the St. Lawrence to move up 19 places to 31st in the AOY points. It was a confidence booster and gave him a little wiggle room heading into the final two regular-season events and AOY championship.

“It was everything. That was huge,” he said. “The right guys had to fall in those two events for me to jump up that way.”

Noting his affinity for river fishing, he was undeterred and not intimidated by the St. Lawrence, which he was seeing for the first time.

“My strength is river fishing. I understand current a lot,” he said. “Fishing on Lake Erie has taught me how to drift, so all of my years of experience there set me up to fish that place.”

As for returning to Guntersville next March for his first taste of the Classic, he’s already put in a good bit of time preparing, but he feels like he’s just getting started.

“Personally, I have already put more research into that event than any other tournament I’ve fished,” he said. “Not a day goes by that I don’t do something to get ready for it.”

He is due to make a scouting trip to the lake next week “to cover the entire lake and spend as many days until I’m satisfied.”

With the lake due to go off limits to Classic qualifiers on Jan. 1, he’ll likely make a return visit in December to see if much has changed so once March rolls around, he’s as prepared as he can be.

“One of my favorite times to fish is the pre-spawn,” he said, “and where I guide on the upper (Chesapeake) Bay will lay out the same way Guntersville does.”