McKinnis Remembered As A Visionary 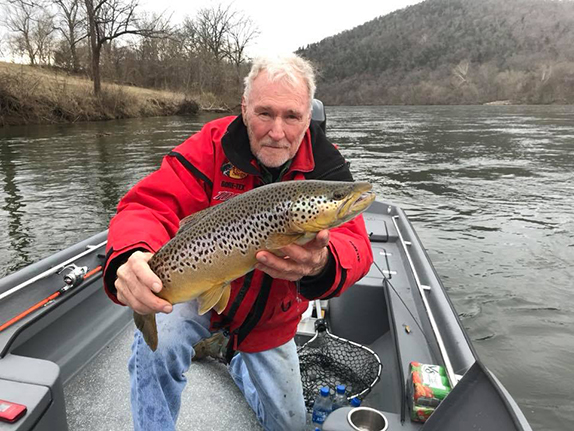 Jerry McKinnis was a pillar of the fishing and outdoor media industries for several decades.

If you’re a fan of bass fishing, if you’re a tournament angler, if you’ve watched a bass fishing show or just about any type of outdoor programming on television, Jerry McKinnis touched your life.

You may not have known it, but he did.

McKinnis is widely credited with pioneering modern outdoor- and fishing-themed television programming. Whether behind the scenes or offering on-camera analysis, he helped bring the sport of bass fishing and other outdoor niche activities to the masses.

Alongside Irwin Jacobs in the mid 1990s, he helped launch the FLW Tour and brought a stick-and-ball sports TV feel to how the action was covered. Through his Little Rock, Ark.-based production company JM Associates, McKinnis oversaw production on a number of shows, including the cluster of outdoor shows carried by ESPN, among them the Bassmaster Elite Series. He was also a co-owner of B.A.S.S. from 2010 to 2017 along with Don Logan and Jim Copeland.

McKinnis passed away last weekend at the age of 82.

A member of the International Game Fish Association Hall of Fame, the National Fishing Hall of Fame and the Bass Fishing Hall of Fame, McKinnis was an angling icon. His popular show, The Fishin’ Hole started as a fishing report segment on a Little Rock TV station’s newscast then developed into the longest-running show on ESPN not named SportsCenter.

McKinnis will be remembered as a prodigious storyteller, able to recount the smallest of details from long ago and recreate the situation as if it had happened yesterday. As a way to memorialize McKinnis and all he accomplished and contributed to the fishing industry on and off the water, BassFan reached out to several people who knew him well and asked that they recall a memorable encounter with McKinnis – you know, tell a story.

What follows are those accounts:

Mark Zona – Bassmaster Elite Series analyst; host of Zona’s Awesome Fishing Show
“Several years ago, (Jerry and I) were fishing alone in a sleet/snowstorm on a river in Michigan. He was tough as nails! We were crushing them and you couldn’t tell us how bad it was out. A guy came out of his house drinking coffee only wearing a robe and slippers and says to us, ‘You two are absolutely insane.’

“He then recognized Jerry and told him he watched him since he was a kid. It was 27 degrees and this dude followed us for who knows how long talking about how he and his dad watched The Fishin’ Hole. I finally turned around and said, ‘You are wearing underwear and we’re the insane ones?’ I’ll always remember that day. Jerry was one tough (dude). I fished with him enough that NO weather stopped him.”

Louie Stout – Bassmaster Magazine senior writer
“Aside from being a fishing legend, Jerry was a huge baseball fan. Before his fishing career, he was a pro baseball pitcher who labored in the minor leagues for the then Kansas City Athletics. He later became a huge St. Louis Cardinals fan and had mingled with several Cardinal managers and players over the years.

“When he took over at B.A.S.S., I introduced myself as a diehard Chicago Cubs fan – the Cardinals’ biggest archrival. That set the stage for a friendly war of words when we crossed paths at Bassmaster events. He never withheld his disdain for the Cubs or I for the Cards. Yet, we bonded quite well, perhaps due to our mutual love for the game and sport of bass fishing.

“When I turned 60, my wife sent me to the Cubs Spring Training Fantasy Camp in Mesa, Ariz., where I played baseball games with other campers, wore authentic Cub uniforms and mingled with former Cub players. When I got home, I couldn’t wait to give Jerry an autographed baseball card with me on the cover in a Cubs uniform. He graciously accepted it. The next time I saw him, he handed me a 1991 Pro League Bass card with his picture on the front, noting him as a member of the fishing Hall of Fame. I was flattered, and I suspect there aren’t many of those around. 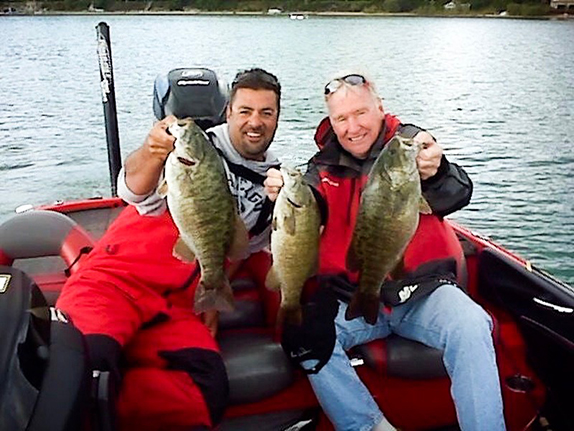 
Mark Zona (left) and McKinnis had numerous memorable days on the water together.

“As much as I respected him as a pioneer in the fishing world, it was his love for the game of baseball that I’ll never forget.”

Keith Daffron – President, Vexus Boats
“I’m looking at a VHS tape of a show that Jerry asked for me to be the guest on that aired in April of 1996. I was still a teenager when it was shot. He floated us down the famed Buffalo River and gave me a lesson with a hair jig that I’ll never forget.

“I’ll also never forget the many other lessons he helped teach me. His loyalty to my family and the Flippin, Ark., area goes back multiple generations. We already miss his smiling face and will be forever grateful for the foundation he helped lay in our industry.

“One other thing: The reason he wanted [Ranger Boats founder] Forrest [Wood] to paint his first boat red was so it would show up well on the few color TVs coming out at that time. Let that soak in for a second.”

Kevin VanDam – pro angler
“I filmed a show for The Fishin’ Hole with him years ago. He loved to catch smallmouth and he’d done trips to the Boundary Waters and all over. He came to up to Michigan and I took him to some of my favorite places. He loved to catch them on a spinnerbait and we had had a good day, but then he hooked one of the biggest smallmouth I’ve seen – it hit right at the boat – and he had it on for a minute, but it came off. It was the greatest high and the lowest low all in the same minute. He handled it way better than I would have. It was one of those moments where you wish we could’ve landed it just to get pictures with it.

“One of the coolest days I’ve ever had was at Bull Shoals [for the 2013 Bassmaster Elite Series]. The day got cancelled in the morning because of thunderstorms and instead of sitting around, Davy Hite and I drove over to Jerry’s place on the White River and he took us out trout fishing. It was rainy and cold and nasty, but the trout were biting. To me, that was just an incredible experience with how he ran that river boat. He knew about every inch of that river.

“A lot of people will talk about his accolades and all the things he did in TV. He was a pioneer. What he started at JM is the model everybody has tried to follow. It was his vision. I feel lucky to have been part of the greatest era in pro bass fishing and it was on his watch.”

Jimmy Houston – pro angler, longtime TV fishing show host
“A number of years ago, we were over to Jerry’s place in Arkansas. We’d been shooting some stuff on the White River for ESPN. Jerry was building a little lake or a big pond by his cabin and we were visiting about what kind of structure he was going to put in the lake since he knew I had experience with that sort of thing. He asked if I’d ever been down to the river that ran through his property. I said, ‘No, I hadn’t.’

“So he takes me down to the river and it’s a beautiful little spot and I remember telling him about the time Forrest (Wood) and I floated the river with our wives for a show and how Chris and Nina had caught more and bigger fish than we did. I then asked him how much river frontage he had.

> In lieu of flowers and to honor McKinnis' love of dachshunds, the McKinnis family wishes that memorial contributions be made to Dachshund Rescue of North America at www.drna.org.