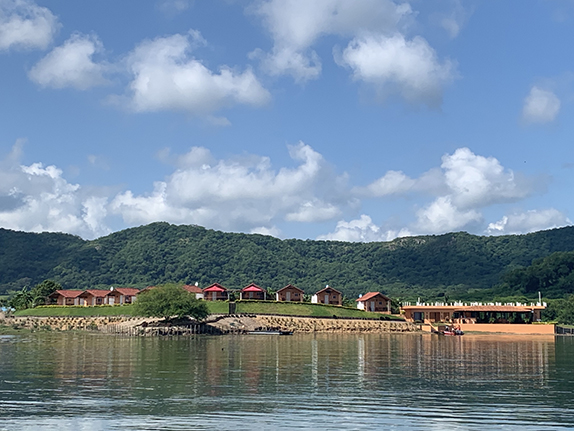 Anglers Inn International at Lake Picachos has a pristine location on a peninsula with near 360-degree views of the lake.

It’s 6:50 p.m. and dusk is starting to set in after another sweltering afternoon in the Sierra Madre Occidental mountains northeast of Mazatlan, Mexico. The sun had already sunk beneath the distant ridge tops, as if it were being tucked in for the night to recharge for another relentless go-around the next day.

Amid the creeping October darkness, a fishing guide steers a 17-foot flat bottom aluminum tiller-style boat around a point and into a small bay. That’s where it’ll be stored overnight with the other identical boats decked out in candy apple red paint with the ubiquitous hotline emblazoned in white on each side: 1-800-GOTA-FISH.

Once the boat is moored, Modesto Paez Paez, sporting blue jeans and a red Kryptek-patterned long-sleeve HUK technical tee, deposits himself and his day bag – on this day, it’s a common plastic shopping bag – into another tiller boat, this one much shabbier and not equipped to accommodate fishermen. It’s more of a late model Aqua Uber and he’s the driver and passenger.

Under the scarce daylight that remained, he twists the throttle on the 60-horse Yamaha and heads off across the lake, leaving the Anglers Inn International compound at Lake Picachos in his wake, literally. Modesto’s work day, which began well before sunrise more than 13 hours ago, is over.

Once he reaches his destination across the lake, nothing more than a small clearing along shore that serves as an access point – and primitive marina – for the lake’s tilapia fishermen, Modesto backs his taxi boat onto shore, and ties it to a nearby tree. He then waits for a ride to take him up the dirt road to the small village of Las Iguanas, where wife Christina and their four children, all between the ages of 1 1/2 and 12, await at home.

The radar alarm sound on my iPhone breaks the tranquil silence, aside from the hum of the wall-mounted air conditioner, in cabin number 10. It’s 5:40 a.m. and I know at precisely 5:45, there will be a knock at the door. It will be service manager Jose Rincon wearing a smile and offering me a “good morning” and a glass of orange juice.

After a brief stop in the dining room for breakfast, it’s time to fish. It’s exactly 39 steps from the door of cabin 10 to the end of the stubby dock where Modesto and the other guides have been prepping tackle in the red boats under the light of their headlamps while waiting to share with us more of Picachos' roughly 13,000 acres created by the damming of Rio Presidio. A normal fishing day at Anglers Inn gets you on the water at daybreak, then back to the lodge around 11:30 a.m. for lunch and siesta, a midday break to escape the heat and humidity. Then, it's back on the water around 3 until sunset. 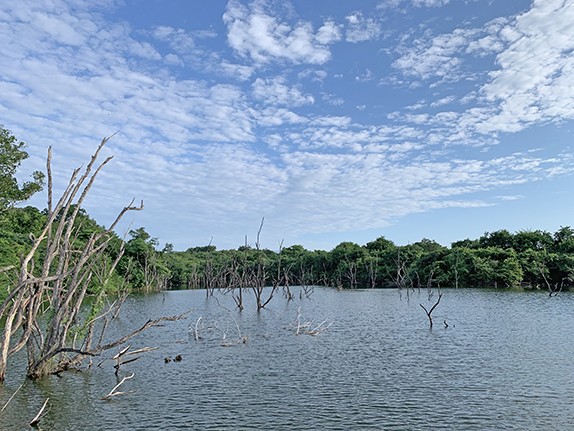 
Picachos is home to an endless supply of flooded timber.

It doesn’t take long to see that Modesto loves what he does. He loves to fish and loves to help others understand how the bass at Picachos behave. Las Iguanas is situated on the eastern side of the lake, so he was able to watch the lake fill up 10 years ago and has fished it since it opened, studying how the water level fluctuations change where the bass hang out. He’s quick with a smile and at Picachos – guide or guest – if you’re not smiling that’s on you. He’d fit right in on the Tennessee River as he loves to throw crankbaits and see others haul in bass on big plugs.

I spent roughly 24 hours in the boat with Modesto over the course of four days during a recent tackle test trip to the Anglers Inn International resort at Picachos. Spend that much time with anyone and you can pick up a lot about their personality. Modesto’s glass was always half full and he was constantly offering his help. His English is excellent, and he can detect and dish out sarcasm with the best of them. His guiding instincts were spot on as well.

None of the guide boats at Anglers Inn are equipped with sonar or GPS units. Fishing with Modesto (or any of the other guides) is old school as it gets. As he’d ease off the throttle while approaching a fishing spot, myself and fishing partner Ron Giudice, of Blue Heron Communications, unpeeled ourselves off the cushy boat seats bearing an embroidered Anglers Inn logo, then asked Modesto for a suggestion of what we should throw. We had a fair, but limited, assortment of tackle with us. He’d pause for a moment to survey the area and his memory bank.

As we prepared to make our first cast, he was always quick to suggest a casting angle. Nine times out of 10, the man was right.

Everywhere you turn at Picachos – every jungle-like cove, every creek arm – is loaded with flooded timber. In the weeks just prior to our stay there, heavy rains had caused the water level to come up a good amount. As a result, the fields of timber weren’t holding many fish. The morning topwater bite wasn’t as hot as expected, but the deep cranking bite more than made up for it. 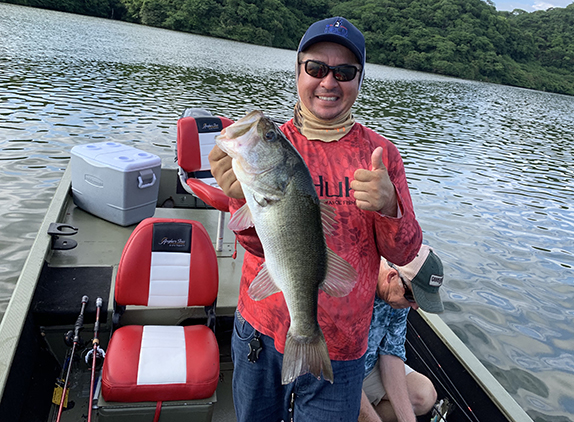 
Modesto Paez Paez is one of several highly-qualified and personable guides at Anglers Inn at Lake Picachos.

During our trip, Berkley Dredger 20.5s and SPRO Fat Papa 70s (both in citrus patterns) were the best crankbaits with the Berkley Warpig lipless crankbait also accounting for dozens of bass caught. A black and blue jig was also productive as was a Texas-rigged lizard.

Picachos is a place where all of your senses run together. The sunrises and sunsets are beyond magnificent. Every time you look up, the scenery is mural worthy. The interplay between the clouds and sun and jagged ridges is, at times, mesmerizing. Distracting even. And every time you look down to refocus on where your next cast will be, another five targets come into range and you think to yourself, “There has to be one sitting there, there and there.”

While on shore, the Anglers Inn staff makes sure you want for nothing. An on-site chef prepares all the meals and every effort is made to cater to everyone’s tastes. This is not your average fishing getaway. While you're on the water, the staff does your laundry from the previous day and has it ready to wear again by dinner time.

Picachos is more than a place to go bass fishing, although that is the main attraction. It’s a complete 360-degree experience. There aren’t many places where you can catch 5- to 7-pounders cast after cast, then come off the water and have a margarita served to you in a goblet that requires both hands to lift while you unwind in a wooden rocking chair overlooking the lake. It’s all part of the Anglers Inn experience and I can see why owner Billy Chapman and Co. are excited to bring the Anglers Inn brand stateside with a new location set to open next year on the Pend Oreille River in Idaho.

More often than we’d like to admit, Ron and I managed to get our baits tangled in myriad jungly places around Picachos. As the trip wore on, I wondered if Modesto had spent more time retrieving fouled baits than unhooking caught fish. The man’s ability to snap baits loose was uncanny. Clearly, we weren’t the first guests in his boat with a tendency for tangles. 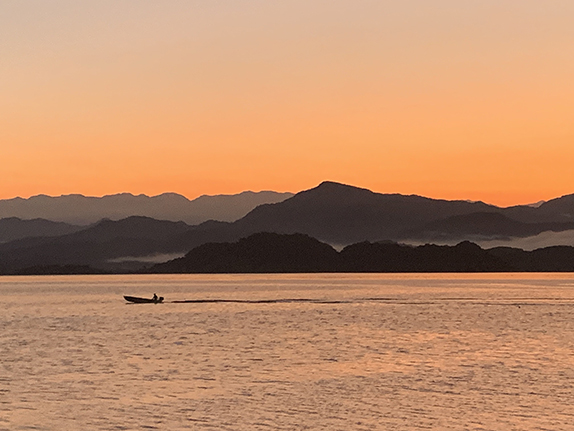 Wrap a Texas-rigged lizard around a branch of a flooded bush?

“Eeetz okay,” he’d say while reaching for the line attached to the fouled lure.

Tangle the treble hooks of a lipless crankbait in a tilapia net?

But the favorite thing I heard him say during our time together came on the afternoon of day 2. He brought us to a secondary point near a bend in a creek. Over our shoulders, the Anglers Inn compound was visible off in the distance.

What followed was as good a deep-cranking catch-a-palooza as I’ve ever witnessed. Long cast, engage the reel, wind the handle eight to 10 turns and hold on. It went on for darn near an hour. The boats aren’t equipped with electronics so there was no telling how many fish were schooled up on this point. It was best left to the imagination, I suppose. Early in the flurry, after swinging one of several four-pound caliber bass into the boat, Modesto grabbed the line, then locked his other hand around the fish’s spine and began dislodging the plug’s treble hooks from its mouth.

He lifted his head and looked toward me, wearing a prideful grin.

“This … is Picachos,” he said as if he were narrating a film about his workplace. I could tell he’d been waiting to say that.

No, Modesto. You … are Picachos, and I hope to see you both again soon.