BACK
Not A Fan Of FLW Changes 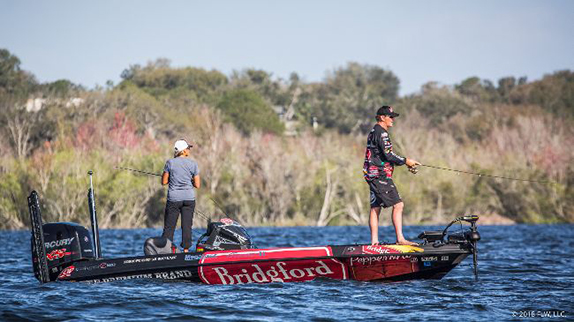 Randy Blaukat (right) isn't keen on the changes made to the FLW Tour (now known as the FLW Pro Circuit) and declined his invitation for 2020.

Randy Blaukat, a veteran of more than 350 B.A.S.S. and FLW tournaments in his career, is planning to return to Bassmaster competition in 2020.

Blaukat went public last week with his decision to depart the former FLW Tour, which has been rebranded as the FLW Pro Circuit as part of Major League Fishing’s acquisition of FLW, in favor of the Bassmaster Opens. The eight-time Bassmaster Classic qualifier with more than $1.5 million in career earnings said he declined an invitation to the FLW Pro Circuit and will compete in both divisions of the Bassmaster Opens. He believes there will be others who choose the same path.

“There’s not a right or wrong answer for anybody,” Blaukat said. “You have to analyze the situation and make the best decision for yourself and your family. I’m pretty excited about it and I’m looking forward to the change.”

Never shy about voicing his opinion on topics facing the sport, Blaukat pointed to a $5,000 entry fee hike and the shuttering of the FLW Cup as the main factors behind his decision.

“To me, that diminished the tour’s value and truly turned it into a feeder system for MLF,” he said, referring to MLF’s elimination of the Cup in favor of a season-ending Angler of the Year derby. “Obviously, it was a big decision because I’ve been with FLW since 1997. For me, it was a combination of a lot of different things. More than anything else, it’s about gravitating toward where your energies lie and where you’re best aligned.”

Further, Blaukat said he disagreed with some of the rhetoric MLF used when talking about the roster of anglers it built for its Bass Pro Tour last year.

“I really don’t like the fact when an organization claims to have the best anglers because by doing that it diminishes the value of everyone else,” he said. “To me, there’s no daylight in the skill level between the BPT, the Elites, FLW Tour, Costas or the Opens. The triple-A circuits are just as competitive as the tour level.

“Let’s say there’s a tournament at Guntersville in April. It doesn’t matter if it’s an Elite Series, an Open or a Costa, it will still take 25 pounds per day to win. This whole thing about one circuit claiming to have the best anglers in the world, it’s fake news. It’s just not true.”

Had to Choose Before

This is not the first time Blaukat has wrestled with a decision over which circuit to compete on. He was among the initial group of anglers invited to join the Bassmaster Elite Series when it launched in 2006, but he declined that option because his sponsor portfolio at the time more aligned with FLW’s lineup of non-endemic partners. It’s a move he came to regret.

“The biggest mistake of my career was turning down the Elites in 2006,” he said. “I wanted to stay with B.A.S.S. but the business side pulled me away.”

At the time, he had a deal with Fujifilm through FLW and had he opted for the Elite Series bid, it would’ve meant he had to affix a Busch beer decal to his boat. FLW rules prohibited alcohol advertising, so it’s a near certainty that he would’ve lost the Fujifilm deal had he chosen the B.A.S.S. route.

Since then, he says he’s witnessed a slow decline in sponsor enthusiasm toward FLW and its anglers.

“It just seemed like the endemics were more willing to do something for you if you were fishing the Elite Series or MLF now,” he said.

Faced with a similar decision this time around, he’s committed to earning his way to the top B.A.S.S. circuit.

“I feel so good about the decision because I’m committed to it, “he said. “It’s not a case of I’m trying it for a year. I’m totally committed to moving forward with B.A.S.S. for the rest of my career. Everybody has to be comfortable and feel good about the decision they’re going to make. I’m going to do all I can to promote the B.A.S.S. brand and get back to the Elites.”

Experience Has Its Drawbacks

Blaukat has fished exactly 200 B.A.S.S. tournaments in his career, but only three since 2005. He doesn’t anticipate making any sweeping changes to how he prepares or practices for a tournament despite there being no off-limits period for Open tournaments.

“I’m going to practice three or four days per tournament,” he said. “Any more and you’re defeating the purpose unless you need to learn how to run certain water because of hazards. I’m used to fishing against a big field from the FLW Tour so a 200-boat field is nothing new.”

Performance-wise, Blaukat’s results haven’t come close to meeting his expectations in recent years. He’s been 100th or lower in FLW Tour points three of the last four seasons and last made the FLW Cup in 2008. The challenge moving forward, he says, will be balancing his experience with trying to stay creative and thinking with an open mind.

“I think my approach has been really good, but the issue has been missed opportunities,” he said. “I’ve had a lot of key fish come off and there were some weather changes that threw me for a loop where I didn’t make the right adjustments.

“I know I’m on the right path. I’m figuring them out in practice and knowing how to catch ‘em. I just have to get into that flow. I’m into my 50s now and I have to make the transition to be able to utilize that experience because creativity and ingenuity outpace experience. If I’m going to have any type of approach moving forward, it’ll be to put my experience on the back burner and remember what’s it like to be 20 years old and try stuff others haven’t tried.” 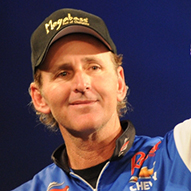