AOY Stumble Has Paquette Hungry For 2020 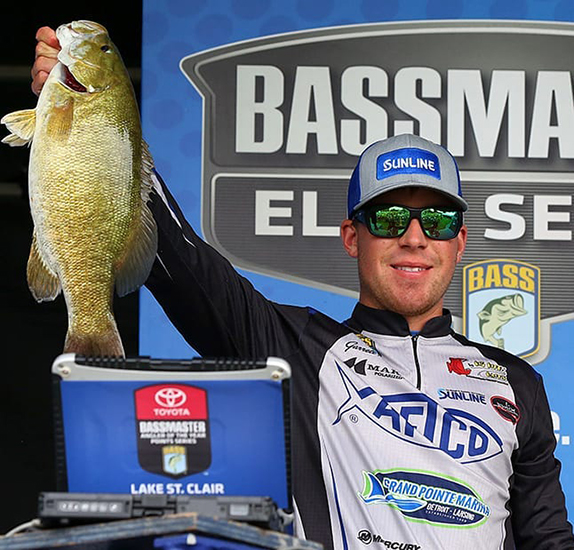 If Garrett Paquette had caught one more fish like this one at the Angler of the Year Championship, he'd likely have qualified for the 2020 Bassmaster Classic.

The grin he wore on stage was just for show. The fish he held aloft in his right hand – a perfectly proportioned 6-pound Lake St. Clair smallmouth bass – was worthy of a smile, but it was one of just two fish in his creel that day.

Behind the green-mirror lenses of his black-framed sunglasses, Garrett Paquette simmered with disappointment and anguish. He could sense the season slipping away.

What appeared to be a slam-dunk, stone-cold lock for Paquette – a home game at St. Clair to finish off his rookie year on the Elite Series – evolved into a nightmare scenario, the nightmare scenario, at the season-ending Angler of the Year Championship.

Nestled in 38th place in the AOY points standings at the end of the regular season, Paquette figured he needed to put together three average days at St. Clair and he’d lock up a spot in the 2020 Bassmaster Classic. Seemed easy enough for the 24-year-old from Canton, Mich., a suburb west of Detroit. He struggled mightily, however, failing to register a limit on any of the three days. His three-day total of 29-10 saw him finish 48th out of 50 competitors. He trailed 47th-place finisher Brian Snowden by more than five pounds.

That result, coupled with the higher finishes of other anglers around the Classic qualification line (top 42 in points), forged a tie between Paquette and Jake Whitaker for 42nd in points. Once B.A.S.S. applied its tiebreaker criteria (total weight caught across all full-field days from the 2019 season, including the AOY championship), Whitaker had the edge on Paquette, effectively snuffing out Paquette’s hopes of making a second straight appearance in the Classic.

It was a bitter pill to swallow considering he’d been as high as 27th in points after six tournaments. His slide down the standings began in August at the St. Lawrence River, where he finished 48th, ending a string of four top-30 finishes. He posted a 54th the following week at Cayuga Lake and was 61st in the season finale at Lake Tenkiller, dropping him to 38th before St. Clair.

“I almost needed a perfect disaster to not make the Classic and it happened,” Paquette said. “The guys who needed to do well did well and I didn’t do what I needed to do. I have to just tip my cap to the guys around me in the standings. Coming in, it would’ve taken a miracle for me to miss the Classic even if I caught one fish. Jake and Skylar (Hamilton) were both out of their comfort zone, but give them credit, they did what they needed to do and did a good job.”

Not a St. Clair Expert

Despite growing up a short drive from St. Clair, Paquette said he often avoided fishing there because it lacks the structure and contour variations he prefers. It’s just difficult to read why fish congregate in certain areas, he said.

“I used to go away from that place because it never related to anywhere else in the country,” he said. “I wanted to fish for a career and St. Clair didn’t really match up with anything down south.”

So when B.A.S.S. announced the smallmouth mecca as the site of its AOY event, Paquette did one of those deep-gulp swallows and figured he’d make the most of it.

“When they announced the tournament, I know a lot of people expected me to do well and that’s fine. I live there, but it doesn’t align with my strengths,” he said. “I’m a structure guy and like to read contour maps and catch them that way.”

Complicating matters were the boundaries B.A.S.S. put in place, effectively hemming the competitors in the lake. That took away one of Paquette’s local advantages.

“When they announced it was bridge to bridge, I knew it’d be a challenge,” Paquette added. “If I could’ve run past the Ambassador Bridge, I’d have had 20 pounds in 10 casts. It was tough to swallow knowing I had to work that much harder.”

Weather in practice made the lake tough to get around on and the wind persisted through day 1 of the tournament. Paquette tried to focus on areas where he’d had success in the past, mostly near the St. Clair River.

“That’s where, realistically, the biggest fish in the lake live, but they’re harder to catch,” he said.

But he couldn’t get any momentum going. He had three fish on day 1 and two more on day 2, including the 6-pounder.

“Especially on lakes up north, when you get behind there, it’s tough to come back,” he said. “I had that 6-pounder and lost another one and felt like I gave myself an opportunity at a really big bag, but I tried to do too much. I fell way behind, so on day 3 it wasn’t about a limit, it was about catching 20-plus pounds.”

In hindsight, he wishes he’d have been more open to sharing information with other anglers because many other competitors seemed to be in co-op mode.

“I’m a hard-head, do-it-yourself guy when it comes to finding fish and a lot of guys were teaming up and breaking down water and guys were getting into packs and fishing those big schools,” he said. “I stayed away from that. Guys I work with offered help, so maybe I spent too much time trying to do it myself. You’re just not able to cover all of the water, so if someone offers helps, maybe I should’ve taken it.

“If I catch five fish one day, I’m in the Classic. I like doing my own thing and I live and die by doing that.”

Paquette said even prior to the AOY event, he was somewhat disappointed in the season he’d had. He was the runner-up at Texas Fest at Lake Fork, but felt he had other opportunities to post strong finishes.

“I thought being in that position to start with, whether I made the Classic or not, it was not the season I was looking for,” he said. “I expect more of myself. I don’t want to be in the 30s or 40s in points every year.”

But he’ll take a good many lessons from this season and try to apply what he learned once the calendar flips to 2020. He’s already begun the process of tackle inventory and organization, something he didn’t focus on until December last year.

“I know what a season is like and what It feel like now and I know that if things aren’t going your way, you can’t let everything go,” he said. “Even if AOY is out of reach, there are a lot of important things to accomplish at every tournament, so I have to keep my foot on the gas.”

“I never felt like I got everything going,” he said. “In the Opens (last year), everything went right. This year, it felt like a fight for everything more than usual. It was hard to string two good days together. Fork was the high point, but other than that, I’d have a good day, then a bad day. It was hard to build momentum. It’s hard to not be disappointed. When I look back at each tournament, I feel like there were a lot of missed opportunities.”