Big O In Good Shape For BPT Stop No. 2 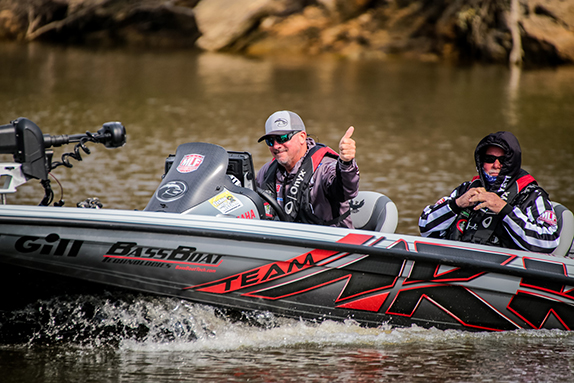 Randall Tharp has enjoyed a lot of success at Lake Okeechobee over the years.

Thirty-seven of the 80 anglers on the MLF Bass Pro Tour roster caught at least one fish weighing 5 pounds or more in the season opener at Lake Eufaula. Whether that number goes up or down in the second event at Lake Okeechobee remains to be seen, but one thing's a near certainty – there will be far more non-scoreable bass caught at the renowned Florida fishery than there were at Eufaula.

That's always been the nature of the Big O: catch five 1-pounders, then a 7. Catch eight more 1-pounders, then a 4. A 10-pounder or two is a distinct possibility during the event that runs Friday through Wednesday, but a whole bunch weighing less than 2 pounds (the minimum for scoreability) is a lead-pipe cinch.

"The lake's in good shape, but the way it's fishing right now is kind of odd," said Tom Mann Jr., the longtime tour pro who's spent the past decade as a full-time guide at Okeechobee. "One day can be awesome and you catch them everywhere you go, and then the next day you struggle to catch five to seven fish.

"I'm looking forward to watching this tournament play out. The (air) temperature's been in the mid-80s since last week and the conditions are right. Some fish will be coming into those flats (to spawn) and those guys are going to find them. I expect it to be a lot like Eufaula – some guys will struggle and some guys will really catch them."

Before delving deeper into the bite, here's a rundown on the fishery itself.

Here's a look at how Okeechobee lays out, thanks to the Navionics WebApp:

Mann had a client cancel a trip scheduled for Wednesday morning, so he took his wife out on the lake. He said that in three hours of fishing, they boated an 8-pounder and a 6, along with a half-dozen or so other fish that that would've exceeded the BPT minimum.

"Neither of those (bigger) fish were spawned out, but there's definitely some spawners and there will be some sight-fishing," he said. "From J&S (Fish Camp) all the way down the North Shore to the Shoal and the West Wall, it's all in good shape – there's plenty of grass and clean water. The spraying (to control aquatic weeds) has eliminated a lot of the vegetation where the fish live, but it hasn't killed the lake. The water looks good.

"The first day there's going to be some fairly high winds (out of the north), and that may hurt the south end. But these guys are the best of the best and they'll have known by looking at the forecast that they needed to practice some in the north or whatever."

As for what the competitors will primarily be throwing, it'll be mostly standard Florida fare.

"Flipping and pitching will always work and a Senko always plays a part here, and if a guy can find that 100- to 200-yards stretch to go down with a swimbait or a topwater, he can do some serious damage."

He said the chances of someone catching a fish that exceeds 10 pounds are reasonably good.

"I never believe anything here unless I actually see it, and I saw a fish that was over 12 pounds about 3 weeks ago. There's been a few double-digit fish caught, but what this lake is really known for is the (large) number of 7- to 9-pound bass."

Mike Shellen of Okeechobee Bass Guide Service, who's fished the lake since the late 1970s, said there are locations where bass in all three spawn phases can be caught.

"If you can find a spot where they cycling in for pre-spawn, they'll stay there awhile and then move in to start spawning and they might stop in the same place coming back out. If you find one of those places, you'll be around the fish you need, but they're special places.

Another way to load up quickly is to run across a school of bass feasting on shad in open water.

"We're seeing a lot of shad right now and there are times when you can find the bass schooling on them," Shellen said. "When that happens, you can catch them real fast.

"The options are off the charts, depending on how guys want to catch them."

A Few to Watch

> Randall Tharp – His knowledge of the Big O is vast (he spent his winters there for years) and his track record on the venue is stellar. He won the 2012 FLW Tour event by more than 23 pounds.

> Bryan Thrift – Okeechobee has been hit or miss for him – he's had a couple of bad finishes, but also a couple of top-10s. With conditions being stable, he's unlikely to be fooled.

> Ish Monroe – He's posted six straight finishes outside the top 50 dating back to 2019, but is always a big threat in Florida. Perhaps returning to the site of his 2012 Bassmaster Elite Series triumph is what he needs to turn the momentum around.

> Michael Neal – He claims to dislike the lake, but he's never finished lower than 28th in four tour-level appearances at Okeechobee and has logged two top-5 showings.