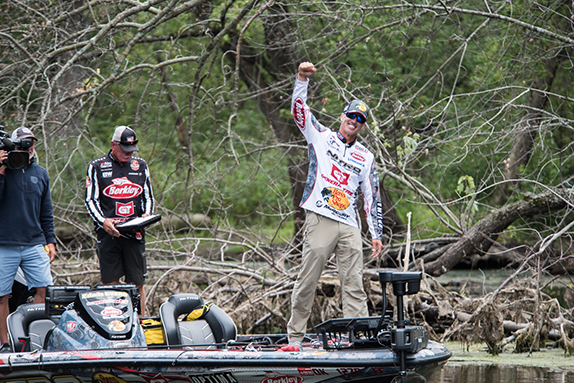 Edwin Evers was all smiles after leaving the rest of the Championship Round competitors on his wake at the Mississippi River.

Prior to arriving in La Crosse, Wis., for the start of the Bass Pro Tour Redcrest, Edwin Evers liked how his skillset matched up with the challenges he was likely to face on the upper Mississippi River.

As one of the most versatile and experienced anglers in the 30-man field, there wasn’t much the river could throw at him that he hadn’t already seen before, either there or on other river systems. Remember, he posted Elite Series victories on the Alabama River, the St. Johns River, the St. Lawrence River, the Tennessee River (Kentucky Lake) and also claimed the 2016 Bassmaster Classic title at Grand Lake with a massive final-day bag caught out of the Elk River. The man flat out understands how bass behave around current.

Momentum was on his side, too, as he was coming off a season that saw him claim a Stage victory (Lake Conroe) and the first points championship of his pro career.

“I was pretty excited about it,” Evers said. “I feel comfortable fishing the river there. Maybe my record doesn’t show it, but it’s a place I’ve always liked.”

His record in events out of La Crosse wasn’t all that bad actually. In four Elite Series tournaments, his average finish was 35th. Included among those were two top-12s and a top-40 showing. His worst finish (86th) came last year when the river level was on the rise after a heavy rainfall immediately before the tournament.

While he was most excited about the prospect of fishing the Championship Round on Pool 7, where he had a good bit of experience and some unfinished business, he had to get there first and that involved surviving the qualifying rounds on Pool 8.

Here’s a rundown of how he survived and advanced through the Elimination and Knockout rounds before lapping the field with a Championship Round for the ages.

With Pool 8 serving as the venue for the qualifying rounds leading up to the Championship Round, which took place on Pool 7, Evers put an emphasis on finding places with concentrations of bass. Low water levels drew fish out of the cover they’d been inhabiting and put them in much more predictable locations. Current, as it always is, was also a major factor in positioning the fish.

“I approached practice to find groups of fish,” he said. “From my past experience on rivers and there in particular, there are always places where they group up. It might be four of them or 20, but they’re always grouped up. I focused on points, tails of islands, wing dams – anywhere they would group up.”

He said the start of practice was slow, but once he began throwing the Berkley Frittside crankbait, the puzzle started coming together.

“I caught one everywhere I stopped on it,” he said of the recently introduced flat-sided plug that dives to five feet with relative ease. “The combination of that bait and fishing points, when I’d catch one, there’d be multiple fish or I’d catch two. There were always groups of them.”

He estimates about 70 percent of the bass he caught in practice were smallmouth.

“I was ready for the tournament to start after day one. It was something about that flat-sided bait that drew those fish out,” he added.

The Shotgun Round last Wednesday didn’t unfold how Evers thought it would. He caught a few fish in the first hour, then went roughly three hours until his next bass came in the boat. Other than a handful of fish caught on a shaky-head, the crankbait accounted for the bulk of his weight.

“The best group of fish I found, I only caught a handful there and the other groups were community holes,” he said. “I rotated through some of that stuff and some bridges and it was one here, one there. It was a lot harder in the initial rounds than I thought it would. I thought I’d catch a lot more fish.”

The Elimination Round was not as much of a grind and as the day wore one, he felt comfortable about catching enough to finish in the mid-teens, securing a spot in the Knockout Round.

“It was quite a bit easier,” he said. “I felt like I could stay in 14th or 15th and stay in there. I wanted to make sure I fished Friday. That was part of my strategy.”

His reasoning there was he didn’t want to contend with the weekend boat traffic.

“I wanted to get right back out there because you don’t know how hard something is going to get pounded,” he said. “When you’re out there, you can see what’s getting fished and what’s getting a break. Plus, my family was going to be in town Saturday and I wanted to spend time with them.”

He boated 24 fish for 36-15, which put him in 15th place and slotted to fish the first Knockout Round on Friday.

The Knockout Round produced his highest fish catch total and best weight of the first three days, but it was no easy chore nailing down a spot in the top 5. He was seventh after the first period and sixth after the second, but had his best period of the day in the third with 12 bass for 16-15. It was enough to fend off Stephen Browning to claim one of the 10 spots in the final.

“I had a spot I was saving and the first two times I fished through it, it didn’t produce,” he said. “I went back a third time and caught what I needed. It was a nerve-wracking day. Until you experience it, it’s hard to describe it in words.”

On Saturday morning, he spent four hours exploring Pool 7. Knockout Round qualifiers were allowed to drive around, but fishing was not allowed. Evers used the time to check old haunts, but there was one area in particular he was curious about. It turned out to be the place that produced his prodigious third-period flurry during the Championship Round.

“I just didn’t want to get stuck,” he said. “I found stuff I really liked and found spots where I’d caught fish in the past that was current related. I felt like there would be fish on the same stuff. I tried to get into that backwater and once I got in there it didn’t look awesome. In the past, it was matted and hard to fish, but it worked out that it wasn’t matted and open down the middle because that meant the fish had to relate to the wood that was left in there.”

When he woke up Sunday morning, Evers said he made the decision to start in an area on Pool 7 that he’d fished before, but have never truly tapped into its potential.

It was reminiscent of the area he won out of at Conroe – a secluded section of the fishery that he had all to himself.

“It’s important to maximize your time and put the trolling motor down and produce bites, and not run around,” he said. “Any time spent running around you can be falling behind on the ScoreTracker.”

One element was different this time around in that he noted a few more blowdowns had made their way into the water and that only worked to his advantage.

“I had some areas where I knew some fish lived, but it was a matter of getting in there and figuring out how to catch them,” he said. “Fortunately, the first area was all I needed and it worked out.”

He spent the early part of the day picking over wood by pitching a Berkley Pit Boss. He piled up 22 bass in the first period. His closest challenger, Greg Hackney, caught nine. The second period was his slowest with only eight fish posted on the ledger. Hackney closed the gap to under six pounds, but a late-period surge put Evers comfortably ahead entering the final 2 1/2-hour period.

That’s when he began casting toward a spot where an old beaver dam used to be. Evidently, a few dozen bass had taken up residency because Evers plucked almost every one of them out of there with a vibrating jig. It was like watching the first catch on a loop – he’d make a cast, engage the reel, crank the handle three to four times then set the hook, land the fish, clip it to the scale and release it. For a half hour, the bass came into the boat at such a frenzied pace the boat official wasn’t able to enter them into the ScoreTracker system until later. What was already a healthy advantage turned into a runaway and Evers had the second $300,000 payday of his career.

The win capped off a remarkable season in a tournament circuit that didn’t exist a year ago.

“The last year flew by,” Evers said. “It was a whirlwind. It’s amazing that, heck, eight months ago we all signed a deal to start a new league. It’s amazing it came together in such a short amount of time.”

> He also caught a few fish during the early rounds on a Berkley PowerBait Power Jerk Shad.