Pace Did A Little Bit Of Everything 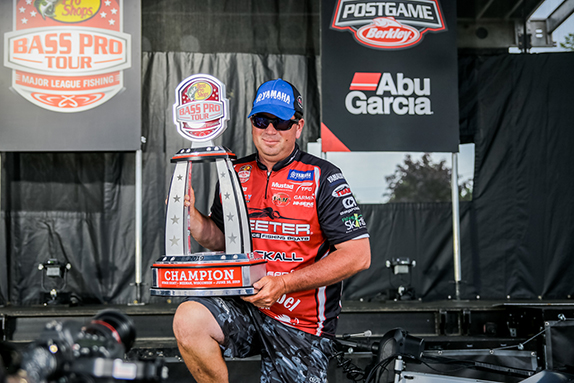 It had been more than six years since Cliff Pace last won an event at the tour level prior to last weekend.

Like most everything else he does, Cliff Pace took a simple, straightforward approach when trying to address the struggles that befell him during the first half of the Bass Pro Tour season. He put in more time on the water, fine-tuned his electronics and learned how to benefit more from them. His frustration, which was plentiful, served as motivation. He figured his run of missed cuts would end eventually.

He was right. He closed season on a tear, capping it off last weekend with a dominant showing in the Championship Round of the season finale at Green Lake in Wisconsin.

“I made three cuts, two top-10s and had a win,” he said of his performance down the stretch. “That’s about as good as I could ask for.”

The 2013 Bassmaster Classic champion had a solid Shotgun Round as part of Group B, finishing 12th at Lake Winnebago last Wednesday. He was the only angler in his group to eclipse the 40-pound mark in the Elimination Round as he rose to 4th after two days, collecting a spot in the Knockout Round.

He hovered around the top 10 all day at Lake Butte des Morts on Saturday before finally settling in 10th at the end, edging first-period leader Fred Roumbanis by 10 ounces.

That set him up for a trip to Green Lake, where he hung near the leaders early on, then took control in the second period en route to a 13-pound blowout, thanks to a furious jerkbait bite under cloudy skies.

Here are some additional details about how Pace prevailed in the Badger State.

During the two-day practice session, anglers were allowed to check out Lake Winnebago along with Butte des Morts and Lake Poygan and Winneconne as the latter two were due to serve as alternate fisheries in the event competition at Winnebago couldn’t proceed due to weather.

Pace opted to spend both practice days at Winnebago, but the conditions made it difficult to classify them as productive. High winds rendered the make lake nearly unfishable and churned up much of the lake.

Pace made docks, riprap and isolated wood the focal point of his first two rounds at Winnebago. He alternated between two square-bill crankbaits “just to give them a different look,” he said, and he also threw a swim jig and flipped a beaver-style bait around willow branches and docks.

“It was all junk fishing basically,” he said. “On day 2, I caught a bunch of fish out of a willow limb that had been blown out in the lake by the storm the night before.”

In the Knockout Round, he followed the same recipe at Butte des Morts, which was considerably more shallow than Winnebago. The exception was he added a Ned rig to his arsenal in place of the swim jig, pitching it around shade lines near docks.

When he arrived at Green Lake for the final round, he tried to find areas with rock, knowing the smallmouth would likely be in the vicinity.

“I felt like the smallmouth would be easier to catch than the largemouth,” he said.

Initially, he caught a couple fish on a swimbait, then switched to a dropshot leading into the weather delay that halted competition for 75 minutes.

When competition resumed, he started to have success with a jerkbait in the overcast conditions.

“I found a 3/4-mile stretch coming out of a spawning bay and I knew in there somewhere there had to be smallmouth that would use that,” he said.

Keeping his boat in 7 to 12 feet of water and casting into 5 to 9, he piled up fish after fish on his scorecard. Under cloudy skies, he opted for a pearl white jerkbait. When skies began to clear, he opted for a version that he had modified by scraping all of the paint off it with a pocket knife, only to add a strip of light tan furniture stain to the back.

“I had fished a clear-water lake earlier this year and I didn’t have a translucent jerkbait so I took one and scratched all the paint off of two of them,” he said.

In the afternoon, he noticed the fish had moved in shallower, possibly as a result of the storm that caused the weather delay. He made the necessary adjustments and was able to fend off a late-day charge from Bobby Lane.

“I think that storm might’ve pushed some deeper fish up toward the bank,” he said. “I first stated catching them in 10 to 12 feet and by the end of the day I was catching some in three feet. It was more about covering water than making a certain cast. In that clear water, those smallmouth will come a great distance to get a bait.”

> His preferred flipping bait was the V&M Flat Wild.