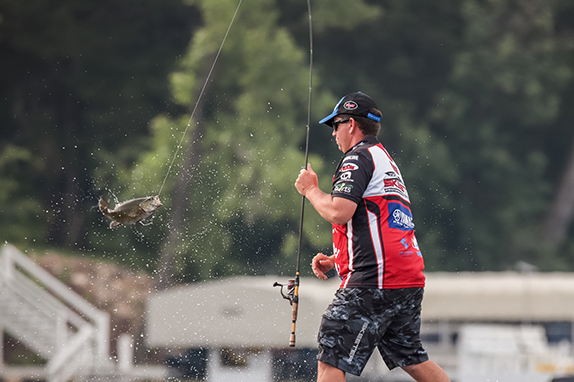 Cliff Pace utilized a dropshot to fill his scoresheet with smallmouth bass early on today.

Cliff Pace didn’t begin the Bass Pro Tour season how he had hoped. He sure finished strong, though.

After missing the Knockout Round at the first four tournaments, he took some time to get refocused and bottled up all the frustration that had built up to use as fuel for the final three events.

“I was the first guy out of the cut at Chickamauga and I left there exhausted,” Pace said. “I took some time to work on me. I spent a bunch of time in my boat. I played with my electronics more than I typically do. I just needed to fine-tune me as a fisherman. It’s something you have to do because sometimes getting comfortable can be your worst enemy.

“Frustration for me is motivation. I wasn’t frustrated at anything but myself. I knew I could do better than what I had shown.”

He missed another cut at Smith Lake, but he got things turned around for the final three events. After notching finishes of 7th and 23rd at Table Rock Lake, he capped off the season with a dominant performance today in winning the season finale in Wisconsin.

The Mississippi native caught 47 bass – all smallmouth – out of Green Lake during the Championship Round and amassed 81-09 to win by nearly 13 pounds. He rode a dropshot and jerkbait to his first win since the 2013 Bassmaster Classic at Grand Lake. He also clinched a berth in the Major League Fishing Summit Cup.

Afterward, he was reflective about the journey to regain his competitive edge since returning from injuries suffered from a fall from a tree stand in January 2014. He broke his left leg in two places and torn the ACL in his knee and missed the entire 2014 Bassmaster Elite Series season.

“I don’t have the words for it,” Pace said. “It’s been a long road for me since I fell out of that tree stand. I was far more consistent back then. It’s been an uphill fight since then. I’ve had some good tournaments, but I wasn’t where I was and I wasn’t in contention to win. To be honest, I struggled to get comfortable.”

Making the move to the Bass Pro Tour was a major adjustment, as well, but his late-season surge indicates he’s getting the hang of it.

“Here everything was so different,” he said. “I like to fish slow. I’m a grinder and like to pick stuff apart. Here you struggle that way, so to win on this level, it’s a huge accomplishment and a gift from above. It’s very satisfying for me.”

Pace took the lead in the second period from Jacob Wheeler and built a comfortable cushion until Bobby Lane closed to within six pounds with under an hour remaining in the third. Pace didn’t flinch and pulled away to win by nearly 13 pounds.

When the third period concluded, Pace, who’s known for his reserved demeanor, tossed his rod down, pumped his fist, broke into a wide smile and let out a raucous “Woooo!”

The victory capped a week that saw Pace finish 12th in the Group B Shotgun Round, fourth in the Elimination Round before placing 10th in the Knockout Round to seize the last spot in the finals.


Bobby Lane relied on a dropshot today to finish second.

Green was a vastly different playing field for the finalists compared to Lake Winnebago and Lake Butte des Morts, both part of the Fox River chain. Green is a deep, natural lake with gin-clear water and healthy populations of largemouth and smallmouth. To illustrate Green’s superiority as a fishery, Pace caught 51 fish in two full days at Winnebago while Lane had 41.

“It was like night and day,” Lane said when comparing Green to the other fisheries.

The first period belonged to Jacob Wheeler, who caught 27-14 (11 fish) and seemed destined to be a factor all day long as he pursued his second straight victory. As the second period began, though, Wheeler’s action slowed while Pace began to chip away at what was a seven-pound deficit.

Pace took the lead roughly 40 minutes into the second and held nearly a two-pound advantage when competition was halted at 10:45 a.m. local time due to a thunderstorm.

When fishing resumed after a 75-minute delay, there were 15 minutes remaining in the second period and Pace used those 15 minutes to tack on six more fish and extend his advantage to more than 5 1/2 pounds.

“That’s when I got the jerkbait dialed in,” he said. “I had a bunch of water that I hadn’t fished yet and I went into the second break with a big grin on my face. I finally had something I had a lot of confidence in.”

From there, it was a two-man duel as Pace and Lane pulled away from the pack. Pace said the storm sent many of the local anglers scurrying back to the ramp, opening up more water for him to target.

“That storm ran everybody off,” he said. “I don’t think I win without the storm.”

As Pace covered water with a jerkbait, Lane tried to keep up with a dropshot as he targeted areas where smallmouth were still hovering around beds.

“At one point, I felt like it could happen,” Lane said. “Then I kept getting updates and I couldn’t catch enough. Normally, the leader slows down or burns up his fish but Green Lake had so many you couldn’t catch them all. When I thought he was going to slow down, he picked up the pace. I couldn’t make up any ground. The more I caught the worse it got.”

Despite building a lead of 15-plus pounds with an hour, 50 minutes remaining, Pace never felt comfortable. Within 20 minutes, Lane cut the deficit to 6-03. With an hour to go, Pace was up by 9 1/2 pounds and Lane couldn’t get any closer.

“He got close,” Pace said. “I knew it would be a two-man show. I was still catching them, but he was catching them so fast. I guess he finally ran out of them. That’s the difference between a spot and covering water. I never ran out of water.”