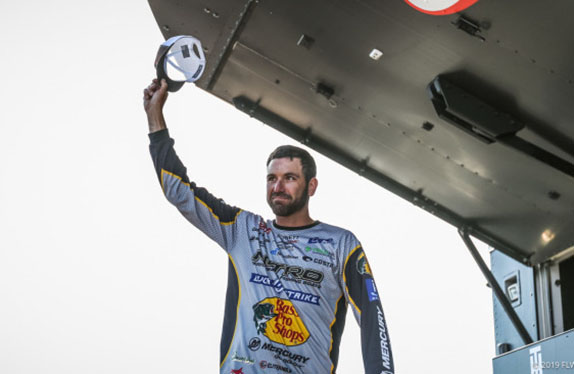 A late kicker on the final day at Lake Champlain lifted Casey Scanlon to his first tour-level victory.

With about 15 minutes left in the FLW Tour regular-season finale at Lake Champlain, Casey Scanlon was facing an uncomfortable reality.

After making the hour-long run down to Ticonderoga, he arrived at his best spot only, to have it fail him completely. He proceeded to grind and adapt all day, catching four solid largemouth. But as time ticked away, he still had a 2-pounder he badly wanted to cull and a brutally rough ride back to weigh-in ahead of him.

“I decided to sit on one area, slow down and make some really precise casts,” Scanlon said of his final minutes. “That’s when that big girl came up and ate my vibrating jig. She was the one I needed.”

That she was. That fish buoyed his final-day bag to 19-10 and his four-day total to 76-02 to cap what is a rare feat on Champlain – winning a four-day tournament solely on largemouth.

Of course, he wasn’t the only one keying on Ticonderoga and green fish this week, as seven of the top 10 were making the run down to the south end

Bryan Thrift nearly pulled off his seventh tour victory by originally targeting smallmouth up north, only to have largemouth invade his spot come the weekend. The mixed bags eventually totaled 73-15, which put him in 3rd.

Meanwhile, David Dudley (72-04) and AJ Slegona (71-09) stood up for the smallmouth, utilizing all brown fish to finish 7th and 8th, respectively.

And then there was Tyler Stewart, who led the event the first three days from Ticonderoga. The young Louisiana pro unfortunately ran into some trouble today. He not only lost an ear on his prop on the ride down, but upon arriving, he was unable to fish his best spots due to local anglers. He brought in only four fish and fell to 9th with 68-10.

“I had two places – a pipe and a bridge – that if I could fish them thoroughly, were a guaranteed 16-17 pounds,” Stewart said. “Yesterday there was a local on the bridge, and today there were two on the bridge and two on the pipe. When you took those away it made it tough.

“I can’t complain, though. I had my best tournament of my career, and it was a good way to end my season.”

Had Scanlon not had such a good event, this would’ve been his last event of the year, as well.

On the outside of the cut line for the FLW Cup, he figured he needed to make the top 10 for a chance to qualify. Well, he’s in now (he concludes the season at No. 39 in the Angler of the Year race) thanks in large part to how he adapted today and throughout the week.

“The fish moved on me every day,” Scanlon said. “I had a spot with two rocky points close together with a small grass patch between them. The first three days, I could basically call my shot on it. Yet today, I never got a bite. 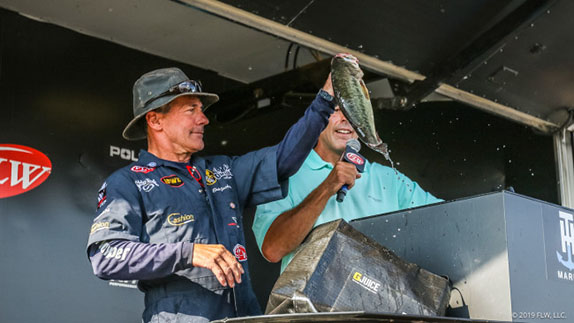 
Eric Jackson's runner-up finish was by far the best of his career.

“Today was different in all ways, actually. I couldn’t get bit fishing slowly. I tried tossing a Lucky Strike Pow Stick, which had produced a lot of fish for me, but I never got a bite. Today was all about a vibrating jig and that Trophy Bass Company swimjig.”

Where he threw his key baits even changed by the day. Scanlon said the fish started out the week keying on rocks, but they eventually moved to inside grass lines. Today, they’d moved to the outside lines, along with pencil reeds and small lily pads. A big reason for this is Scanlon figures his fish were spawning and then leaving as the week went on.

Jackson can echo those sentiments, as he capitalized on bass leaving a shallow bay in the La Chute River, particularly around a key bridge.

“That bridge was amazing,” Jackson said. “Once I got dialed in on it, I realized it had four key spots on it.”

Meanwhile, no one may have had more fun today than Brasher. He had one spot at the mouth of a creek he milked for a limit each day, but today was something else entirely.

“The fish moved around each day, but the last two days they showed themselves and came up schooling,” Brasher said. “It got stupid. I probably caught 60 fish. The previous days I’d leave and go try for kickers, but I just couldn’t leave today. It was too much fun.”

Of course, the fun ended when all the guys down in Ti had to make the run back. Some guys mentioned it was the worst runs they’d made in a while, or even ever, as a north wind was blowing straight down the lake. Yet, for Scanlon, it was worth it.

“We got really lucky,” Scnalon said. “Seven of our eight boat rides this week were great. That doesn’t usually happen. Just part of an amazing week for me.”