BACK
Wheeler Has Shot At Repeat 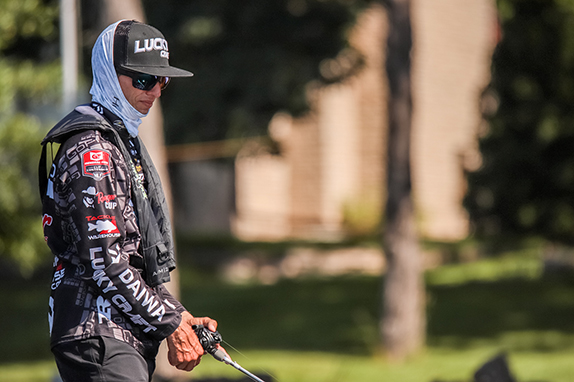 Brent Ehrler took charge of the Knockout Round with 29-15 in the second period.

When laying out his practice strategy last weekend prior to the Bass Pro Tour season finale, Brent Ehrler decided to devote most of his time to Lake Winnebago, where the first four days of competition would take place, weather permitting.

He also put in some time at Lake Winneconne and Lake Poygan, which were Major League Fishing’s Plan B in the event wind made Winnebago unfishable or unsafe.

Anglers were also allowed to practice at Lake Butte des Morts, sandwiched between Winnebago and Poygan/Winneconne and site of today’s Knockout Round, but Ehrler opted against it.

“I figured if I made it through then I’d just go blind and hope for the best,” he said.

Hope didn’t seem to be factor today as Ehrler used a nearly 30-pound outburst in the second period to take control of the KO Round and cruise to a first-place finish, clinching a berth in his third Championship Round of the season. He finished the day with 28 bass for 56-07, the only angler to catch at least 25 fish and eclipse 45 pounds.

“I didn’t spend any time there. I just went fishing and got around them,” said Ehrler, who’d finished 13th in Group A.

Jacob Wheeler made his fourth Championship Round of the season – and third in a row – by finishing ninth today. Morgan and Wheeler will be vying for their second victories of the year with Wheeler looking to capture back-to-back wins to close out the season.

The field for the Redcrest championship also was finalized today with Mark Daniels Jr. and Randall Tharp both improving eights spots in the points ledger to move inside the top 30 and punch a ticket to La Crosse, Wis., in August. Daniels finished 12th today and moved from 36th to 28th in points. Tharp placed 14th and jumped from 38th to 30th.

Dave Lefebre and Luke Clausen suffered the fate of being bumped out of the Top 30 this week as both failed to make the Knockout Round.

The only unsettled matter points-wise now is the 30th spot in the final MLF Cup. Edwin Evers, who claimed the BPT points title on Friday, currently occupies the 30th spot, but if Gary Klein wins on Sunday, he’ll move into a tie with Evers and win the tiebreaker based on having a higher average Performance Rating over the final two events.

Green Lake, a 7,300-acre natural lake located roughly 50 miles southwest of host city Neenah, Wis., will serve as the venue for the Championship Round and the finalists could be in for a treat. It’s the deepest inland lake in the state of Wisconsin and is home to a healthy population of both largemouth and smallmouth. 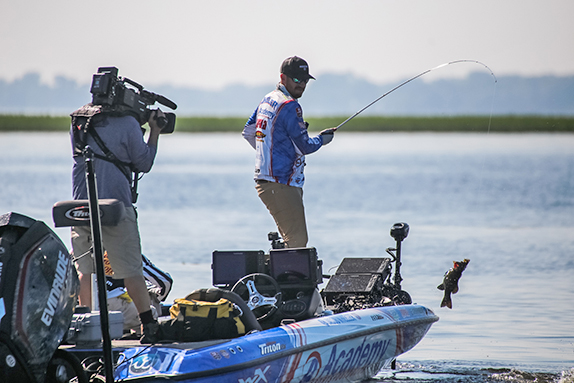 
Jacob Wheeler swings one into the boat at Lake Butte des Morts on Saturday.

Ehrler, who missed just one Knockout Round this season, said he won’t be satisfied with anything short of a victory on Sunday.

He found that Butte des Morts fished pretty much the same as Winnebago, although it’s much shallower (its deepest point is six feet).

“The way the fish positioned was very similar, so I started running the same stuff,” he said.

He caught some on a soft plastic stickbait around docks and shallow shoreline cover in the first period, but he then got into an area with a canal and caught the majority of his fish the rest of the way on a frog. The key to the canal was the cooler water flowing out of it.

“I caught a good bulk of my fish within 100 yards in each direction of the canal because of the cooler water,” he said, noting the main lake water was around 78 degrees. “It was five to 10 degrees cooler, so it was just an area thing. I’d keep rotating around and catch one here and one there. Then I’d get to where the water was warmed and I’d come back. The fish were using that cooler water.”

Aside from one smallmouth in the first period – the first one he’s caught all week – he had all largemouth on his scoresheet.

Wheeler knew his chances to win the points title this week were close to non-existent, so he opted to treat the tournament like his own Angler of the Year championship – and he’s got a shot to win it.

“It feels good,” he said. “Obviously, I just feel like I’m fishing good and everything is working well. When that happens, it’s a really good feeling.”

After cruising to first-place finishes in both the Shotgun and Elimination rounds, he found himself hovering around the cut line today. He was 13th after the second period and planted himself in the top 10 by catching 10-07 in the third.

“I stunk is what happened,” he said. “I had a couple mental errors and had one deal where I had several missed opportunities at 3-pounders. I was going to be irritated if I didn’t make it because of that. It was a tough bite and I like fishing when it’s tough because it makes it to where you have to grind it out. To have another opportunity tomorrow and to start at zero feels phenomenal.”

In his three previous Championship Round appearances, his worst finish is fifth and he spent some time at Green Lake this week riding around (anglers were allowed a four-hour ride-around with no rods on the deck). He liked what he saw.

“It’d be pretty sick (to win back to back events),” he said. “That’s why I went to Butte des Morts in practice and to Green. If I can pull it out it’d be unbelievable. Fishing against these guys is tough enough, so to be in the top 40 let alone win one or two in a year is a great accomplishment. I’d love to top it all off and be the first to win two.”

Tharp, who finished sixth in Group B, came into the week knowing a top-20 finish would secure a Redcrest berth, so that’s what he set his sights on.

“That was the goal coming here,” he said. “I didn’t figure the points out, but I wanted to be in the top 10. It’s been a trying three days. The format that we fish is just different and stressful and intense.”

It may not seem like much, but catching 8-03 in the third period pushed him from 20th place up to 14th and gave him the points necessary to edge Randy Howell for the final Redcrest invitation.

He rode a flipping pattern in the afternoon, picking over pockets with a Zoom Z-Craw rigged beneath a 1/4-oz. worm weight. A wacky rig, a vibrating jig, a swim jig and a crankbait were also productive for him.

“I’m thankful because I’ve had two good events at La Crosse,” he said, referring to the site of the Redcrest. “It’s a place I seem to understand and it just fits my style.”

Daniels’ sole focus entering the week was to make it to today. He knew if he did that, he’d have his Redcrest destiny in his hands. He’s thankful he was able to pull off the rally necessary to clinch a berth.

“Fishing under this format is always stressful,” he said. “That said, I fished loose and calm. I didn’t practice (at Butte des Morts) because I needed to make the Knockout Round to even begin to think about the Redcrest. I put all of my emphasis on Winnebago and Winneconne.”

He overcame a slow start that saw him finish the first period in 24th. He then moved into a few backwaters and started his ascent. He caught the day’s big fish (a 4-pounder) on a swim jig in the third period, then keyed on areas with current moving through them.

“I found a wad of them around 1 o’clock and caught six in six casts,” he said. “It’s a good feeling. It’s one of those deals where we all pride ourselves on making championships and I’ve been fortunate the last few years to make it. It was an absolute grind this season with a lot of highs and lows, but I pulled it off.”