Green Over Brown At Champlain? 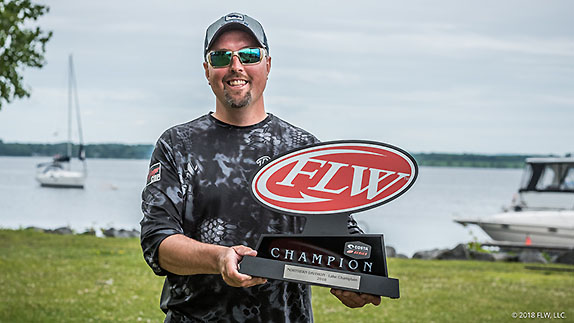 Ron Nelson, winner of the last two FLW Series events at Lake Champlain, will be an angler to keep an eye on this week.

The Northern giant has hosted six top-level events in the last decade (five on the FLW Tour, one on the Bassmaster Elite Series), and it will host No. 7 this week as the FLW Tour finishes off its 2019 regular season.

That should mean there should be few unknowns, right? Smallmouths will definitely be the main player, particularly spawners on beds; kicker largemouths will be at a premium from either the far south or north ends. And expect extremely tight weights, with ounces being key.

Hang on, though. The 100-mile-long behemoth is actually close to 2 feet higher than normal, and also a little dingier. That’s opened up more backwaters, more grass and more opportunities pros haven’t experienced in years past. Plus, reports are the smallmouth spawn is definitely off. All of this could make for an interesting finale, particularly with John Cox and David Dudley within a point of each other for Angler of the Year.

Let’s take a look at Champlain and how pros may have to forget what they usually do on the fishery.

There are a number of favorites in the event, but when it comes to recent success, no angler has been better than tour rookie Ron Nelson. The Michigan pro has won the last two FLW Series events on Champlain, in 2018 and 2017, respectively.

What makes those victories interesting is he did it in different ways; solely targeting smallies last year and using a mixed-bag approach in 2017. This year, he admits he’s not quite sure what will be the best pattern, mainly because he’s having trouble finding those all-important 4-pound-plus fish of either species.

“I’ve not caught a 4-pounder yet,” Nelson said. “I’m catching a lot of 3s, and I just saw a 4-pound smallie on a bed, but the bite has definitely been tougher.”

A big reason, Nelson said, has been the high, dirty water, which has made it much harder or nearly impossible to see spawners in many of the areas Nelson has experienced success in the past.

That’s even made it harder for him to determine if the smallmouth are all post-spawn or if – based on the conditions – there might be another wave coming in this week.

That has led him to think largemouth could be real players this year.

“This year may really play to the largemouth guys,” Nelson said. “My hope is to get 18 pounds of smallmouth and then go get that kicker largemouth like I’ve done in the past, but you may see guys who solely target largemouth who do well. The conditions are setting up perfect for that, with the extra water opening up some backwaters and not allowing the milfoil to top out just yet.”

While largemouth are not as abundant as smallmouth in Champlain, they’re typically bigger. Plus, while anglers formerly had to make a risky run all the way down to Ticonderoga on the far south end to target them, the Missisquoi area on the north end has really grown into a prime largemouth area, minus the dangerous run.

That's a big reason Nelson figures Missisquoi will be a huge player, especially with the forecast of rain and wind.

“I would like to go to Ti, but not with the forecast,” Nelson said. “I think a lot of guys are going to think the same thing. So Miss is going see a lot of activity, and it’s probably where it will be won.

“I think a guy is going to have to be more persistent that in years past with whatever his game plan is in order to be successful this year.”

Austin Felix
“It’s definitely going to be tougher. I haven’t sampled the largemouth. I mean, I have more of an advantage with smallmouth, so that’s what I’m sticking with. But the smallmouth spawn is off.

“There haven’t been any recent waves, so any smallies that are up have been on beds for awhile and are skinny and spooky. They’ve probably already been hooked and the bigger ones have probably all been plucked.

“The weights will definitely be down this year.”

Matt Stefan
“It’s been tough. I’m not finding any fish on beds worth fishing for so far and the ones I’m catching just fishing around are all post-spawn.

“I did sample the largemouth a little, and it wasn’t impressive. But, I’ve dedicated 90 percent of my time to smallmouth, so I'm not the best judge.

Scott Martin
“Overall, it’s been on the tough side. At least, I’m not quite dialed in on what I want to be doing.

“Champlain is a big lake with a lot of options, and I’ve eliminated more options than put good ones on. So I kind of feel a little behind the 8-ball right now.

“There’s literally fish in every stage of the spawn right now based on where you are on the lake, because there’s huge temperature swings.

“The thing about Champlain is that even if the fishing is a little off, the weights will still be the same, so that’s what I’m expecting.”

Luke Dunkin
“It’s not like I’ve seen Champlain before. Normally you can just go down any bank and at least get bites, but it’s hard to even get a bite. I did have one decent day of practice, but it’s been really tough overall.

“I think everyone is confused. I mean, I found an area yesterday where David Dudley and I were both reading 49-degree water. Then I just went to a different area, and I was reading 72.

“The lake is definitely in a funk. I think weights are going to be low by Champlain standards.”

Dylan Hayes
“I came in wanting to catch spawning smallmouth. Unfortunately, I just never found that many big ones spawning. Nothing like the last two years during the (FLW Series).

“The lake it higher and dirtier than normal, so I decided to try largemouth for the first time ever and caught a few. I hope I will weigh a mixed bag.

“Overall, I think that weights will be lower than last year, but this year has so many 2 1/2- to 3-pounders in it so it should still take 14-16 pounds a day to get paid. Somewhere around 75 to win.”

> Scott Martin – He may hail from Florida, but Martin has made a lot of money on Champlain and has won here before.

> David Dudley – He’s not only vying for his record fourth Angler of the Year title, but he also has a victory at Champlain on his ledger.

> Bryan Schmitt – Quietly, Schmitt has put his Potomac River grass knowledge to good use up north.

> John Cox – He’s leading AOY, riding a wave of three-straight top-2 finishes, and has a history of success on Champlain.

The FLW Live on-the-water program will air on from 8 a.m. to 2 p.m. on days 3 and 4. The broadcasts will be live-streamed on FLWFishing.com, the FLW YouTube channel and the FLW Facebook page.