BACK
Fast Start For Vinson

Klein Cracks 60 To Set Pace In Group A 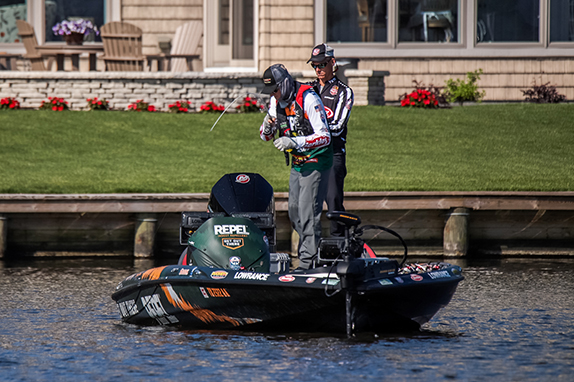 Gary Klein didn't move all that much during the day and caught fish consistently.

Gary Klein and Greg Vinson started the day within talking distance of each other. They ended the day occupying the top two spots on the leaderboard.

After two challenging days of practice at Lake Winnebago, those in the Group A Shotgun Round weren’t quite sure what to expect today as competition got started in the final tournament of the inaugural Bass Pro Tour season.

Klein and Vinson, though, had the same idea as to a starting spot, which wound up producing throughout the day for both anglers.

Klein had one of his best Shotgun Rounds of the season, catching 38 fish for 60-01 to finish the day in the lead. Vinson, meanwhile, eased some of the pressure related to making the Redcrest championship by catching 32 fish for 51-11. They were the only two to crack the 50-pound mark on a day that saw the wind pick up out of the west.

Six other competitors eclipsed the 40-pound mark, led by Brandon Coulter, who had his best Shotgun Round of the season by far. Coulter caught 33 fish for 48-04, surpassing his previous highs of 26 and 38-02, respectively. Alton Jones Jr. sits fourth with 48-02 (30 fish) while Michael Neal, who entered the week third in points, had a strong start with 46-14 (32 fish) and sits in fifth.

Edwin Evers, who’s locked in a duel with Jeff Sprague for the points title, is 26th after catching 23-12 (20) today. Sprague will compete in Group B on Wednesday.

Klein was boat number 31 today and by the time he reached the area he intended to fish right away, he noticed several other competitors around. Rather than join the crowd, he stayed on the perimeter, but still felt confident it could be a productive spot.

“The area I fished was almost a system,” he said. “It has everything a largemouth would want. It has the best grass I’ve seen, docks, some rock and dredged channels, which you know are major spawn areas. By the time I got in there, other boats were there so I stayed in the bay where the ditches come out.”

“I said, ‘That’s fine. I’ll go the other way,’” Klein recalled. “So I started opposite of him. I lost one on my second cast and caught six pounds quick.”

Klein said a small square-bill crankbait was a key for him in the early portion of the day and he was able to utilize it on two of the three stretches he’d hoped to fish. Later in the day, a splitshot rig served to entice bites from fish that had stopped inhaling the crankbait. 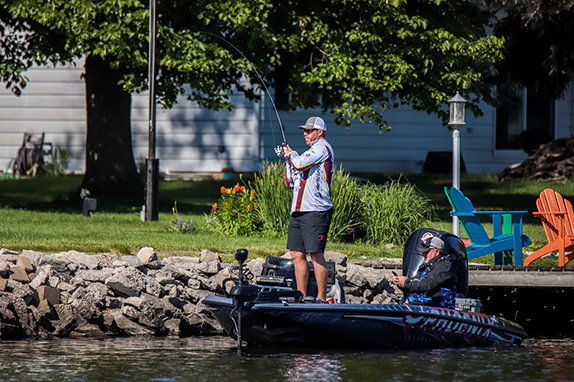 
Greg Vinson set himself up to make a run at a Redcrest berth with a strong Shotgun today.

“I stayed in a 200-yard area all day,” he said. “All of these fish are in 18 inches. I caught nothing deeper than two feet. And there’s one rock I must’ve caught 20 off of. It’s the size of the seat in your car that’s sitting on the corner of a little point. Every 20 minutes, I’d go by it and catch one or two and then there’d be a couple two-pounders there. You’d shake your head at the size of the areas I caught my weight out of.”

Vinson, meanwhile, stayed on the other stretch and maximized what he’d found, which was critical seeing that he entered today 26th in points. With the top 30 advancing to the Redcrest, he knew a strong start would help put his mind at ease.

“The best decision I made was to go into that area,” he said. “I had two choices and I was concerned about the wind. It worked out so I stayed there all day. I caught fish all day and it wound up being a good day.”

“I really needed exactly what happened to happen. I had pressure on me because I basically need to make the Knockout Round, which would lock me in (to Redcrest). To catch enough today to take some of that pressure off was huge.”

Klein, meanwhile, knows he’s a longshot for the Redcrest, having come into the week in 48th. That’s not stopping him from trying to have the best event he can.

“I haven’t had a great season,” he said. “I’ve had a lot of ups and downs, but the downs haven’t been because of my fish-catching ability. It’s been poor decisions. I’m learning how to play this game. It’s a whole new animal and I’m at the point that if I win, I might make Redcrest and I might make the last Cup. If not, I can leave this event having not qualified (for either), but still feel I accomplished something and that’s a good start to the offseason.”

Competition was halted for about an hour during the first period after MLF officials discovered technical issues with the ScoreTracker system. Names of non-competitors were being displayed and credited with fish catches as were anglers who are scheduled to compete in Group B on Wednesday. The lost hour was added to the end of the day.

"This is the first time the Bass Pro Tour has suspended competition due to technical difficulties," Todd Walker, MLF senior director of operations, said in a statement issued by the organization during the day. "Thanks to our format and incredible team, issues like these don't hurt the integrity of the competition due to an MLF Official also always entering a manual log of every scorable bass, every day." 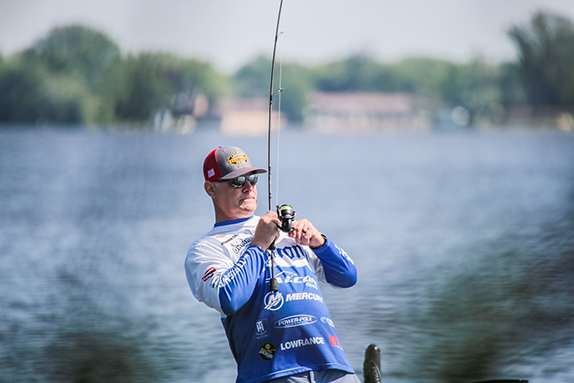 
Brandon Coulter sets the hook into one of his 33 fish today.

Once action resumed, Coulter kept up the momentum he’d built early on. After catching seven bass for 13-09 in the first period, he poured it on over the final two periods.

“My first periods have been so bad all year that I dig too deep a hole to get out of,” he said. “My practice here was bad and I didn’t get many bites. I just went to some water where I’d gotten a couple bites and just fished what was in front of me. Up north, you can just do that. It was fun. It was one of those days where every decision worked.

“I’d look over there and see something that looked good, then I’d go catch four off it. I caught fish on everything I had on the deck. I fished everything that was in front me – grass, docks, riprap – and I just picked up whatever I had tied on that fit the situation. I made the right calls everywhere I went.”

> John Murray had his weight zeroed midway through the third period after it was discovered he had fished the entire day to that point well beyond the tournament boundaries. Murray estimated he lost roughly 20 pounds, all of which had been caught on the Winnebago (east) side of the I-41 bridge. MLF had set the western boundary for Lake Winnebago as the Wisconsin Street WI Trunk 44 bridge, which crosses the Fox River about 2 1/2 miles east of where Murray had been fishing.

Once the penalty was assessed, Murray moved to a different area and said he caught two fish for 2-02, even though ScoreTracker reflected one fish for 1-01 at the conclusion of the day.

Murray said the mistake was completely his fault and that he got the route numbers associated with the bridges mixed up.

“It was a complete brain meltdown. It wasn’t intentional,” he said.

Group A – Shotgun Round Results