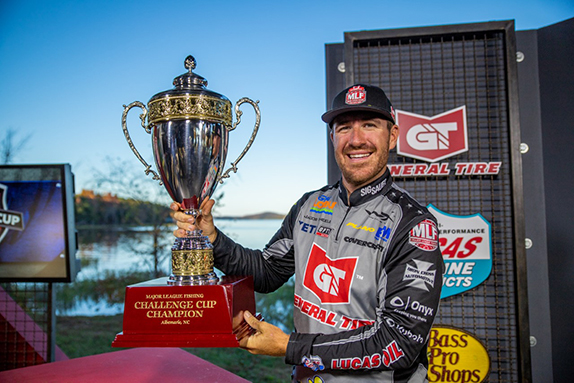 Jacob Wheeler has had no problem transitioning between traditional five-fish limit tournament formats and the every-fish-counts format utilized in Major League Fishing events. In fact, he’s made it look remarkably easy.

Since making his MLF debut at the 2016 Summit Cup in La Crosse, Wis., Wheeler has reached the Championship Round in five of seven events and qualified for the 2019 MLF World Championship, which will begin airing June 22 on CBS.

He won the 2017 Challenge Cup at Lake Eufaula in Alabama and last fall secured MLF Cup victory No. 2 as he claimed the Challenge Cup at Albermarle, N.C. The competition played out over six days (Oct. 29 to Nov. 3) across sections of High Rock Lake along with Lake Tillery and Badin Lake, with the latter serving as the venue for the final round. Wheeler finished second in his Elimination Round group and third in the Sudden Death Round before catching 19 bass for 51-05 on the final day to capture the win.

“We switched lakes all the time and it was a week where everything went right,” he said. “I had a pattern that worked on every lake. That was bigger than anything. I got a vibe of what they were doing on day 1 and that helped me on day 2 and 3. I was also fortunate to pull up on the right places. It felt good to win, especially against those guys.”

It was the fifth straight Cup in which he’s won at least one round, an indication that the format seems to fit his fishing style.

“I fish a lot and I think that’s beneficial for me,” Wheeler said. “Because of that, I see a lot of things happening when I’m fishing. A lot of guys don’t get as many opportunities to fish. I feel like I’m fishing loose and that allows me to make decisions on the fly easier. Sometimes I just guess right.

“It’s some of that and I also know the format pretty well. That allows me to understand it enough to have a strategy going into each round.”

The overarching theme to his success in North Carolina was targeting fish around current breaks. The water, especially at High Rock, was elevated after a period of rain and was much dirtier than he anticipated.

“Normally at that time of year, the water drops and gets clean and it’s more of a topwater and visual bite,” he said. “The water was really dirty when we got there. It was almost like a springtime deal.”

Wheeler was part of the third and final Elimination Round group, which was limited to the Abbotts Creek area on High Rock. He said it’s typically tougher to be in the third group, but he also didn’t know if the other two groups were confined to other parts of the lake as well.

“It doesn’t matter to me,” he said. “You just go when they tell you. You rig up 30 rods and just go. Day 3 is normally tough because you’re fishing behind two other groups, but come to find out, we were in another zone.”

It was a textbook fall day with a cool morning followed by sunny skies and highs in the 60s. During the ride-through, Wheeler made note of the plethora of boat docks and riprap banks.

With the water up a foot, he started on a bridge along with Shaw Grigsby.

“I noticed a bunch of current there and there was a school sitting there,” he said, noting that a Rapala DT-6 was his best producer. “It was a pretty obvious thing. It was a textbook place. I caught one on my second cast, then caught another. I felt like I landed on them and that had never happened before.”

From there, he keyed on neck-downs or any sort of narrow where the current was more pronounced.

“The fish hadn’t seen that during that time of year,” he said. “The bait was there and I expanded on it after I fished the bridge.”

He caught his bigger fish later in the day on a jerkbait and wound second in the group with 37-00 (17 fish). 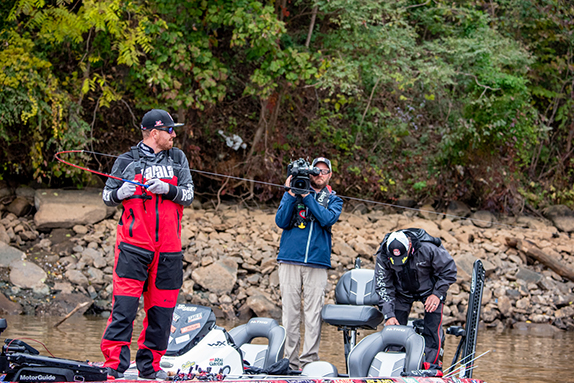 
Wheeler sets the hook on a fish at Tillery Lake during the Sudden Death Round.

The following day, Wheeler was back on the water for the Sudden Death Round. The scene shifted to Tillery Lake, where the water was actually down 10 feet from its normal levels. A thick layer of fog delayed the start by an hour, but it took Wheeler less than two hours to surpass the target weight of 20 pounds and clinch a berth in the Championship Round.

“As the fog cleared, I saw how low the water was and the water was stained,” he said. “When that happens on a fishery like that, it made any little piece of cover in the water have a fish on it. I didn’t want to leave. It was so good. It happened so quick. I felt like it was just the tip of the iceberg.”

Officially, it took Wheeler an hour and 10 minutes to catch the 13 fish necessary to eclipse the 20-pound mark (he finished with 20-08). He did it primarily with a vibrating jig and the DT-6.

“There were deeper fish suspending on bridge pilings,” he said. “I went up the river but didn’t find any neck-downs. I caught one quick and looked up at the piling and they came up schooling, which is not common in stained water. That told me the water’s been stained for a while and they’ve adjusted to it.”

When the activity slacked off there, he moved to other pilings and kept adding entries to ScoreTracker.

After a day off for the second Sudden Death Round, the Championship Round shifted to Badin Lake, another reservoir on the Yakdin-Pee Dee River.

“The water looked normal, but during the ride-through I saw a lot of bank grass,” Wheeler said. “That threw me for a loop.”

Conditions-wise, it was setting up to be a high-pressure, post-front day. Morning temperatures were in the 30s and he figured a punching bite might materialize in the bank grass, which had several feet of water in it. Ultimately, Wheeler stuck with with what worked earlier in the week – current.

“I stayed true to what got me there,” he said. “I went up the river again and I could see the current coming out of the dam. I marked banks that I felt wouldn’t get pressure in the first period and I’d see if that’s the deal.”

He keyed on an area adjacent to a railroad bridge in the first period, flipping laydowns and mixing in a spinnerbait and vibrating jig.

“Any little place where the bank kicked out in the current, it was key,” he said, “and wherever the current hit it the hardest.”

As the morning wore on, he moved up toward the dam and he began catching bigger fish. Six of his first eight fish weighed less than 2 pounds, but a 4-04 he caught on a crankbait just after 9:30 a.m. set the tone for the rest of the day.

“That was in a current seam where there was one rock off a bluff bank,” he said.

Counting the 4-pounder, 10 of his final 11 fish were 2 pounds or bigger, including eight that weighed 3 pounds or more.

“In the first period, I was still unsure because in those full-day events, I try to prepare to fish new water in periods 1 and 2 and go back in period 3 to stretches where I caught them,” he said. “I fished the majority of high-percentage places in the river and nobody was up there with me. I figured if nobody comes up here, I might be good.”

In the second period, Dean Rojas moved into the area and caught a few off a stretch that had produced for Wheeler in the first period. Rojas eventually closed the gap on Wheeler to less than 3 pounds.

“I was scrambling a little bit,” Wheeler said. “I told myself I had to fish back through those places. I like to fish new water and move around so I stuck up there. I went down a stretch a caught a couple and then a couple more. Then I started to pull away.”

“It happened in a matter of seconds and it gave me some breathing room,” he said. “I knew if I could catch a few more, I’d be good. It was not a little-fish deal for sure. In any format, quality fish will always benefit you. Catching three or four of those goes a long way.”