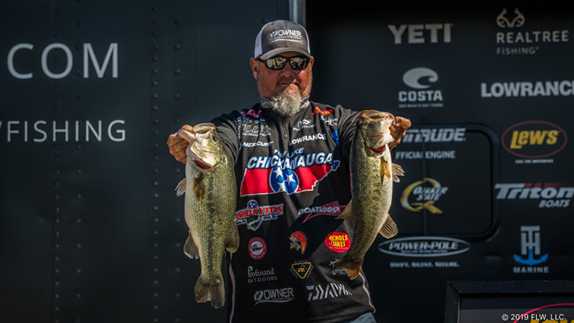 Buddy Gross has logged top-50 finishes in all but one FLW Tour event this season.

Buddy Gross’ magnificent season on the FLW Tour can be traced back to one bad decision he made in January.

It was day 1 of the Lake Okeechobee Southeastern FLW Series and Gross was experiencing some motor trouble. He knew he needed to get it repaired since practice for the Lake Toho FLW Tour was due to begin that weekend.

He caught a limit in the neighborhood of 10 pounds that day, but upon checking in his priority was getting his boat to the service yard to have the mechanical issue diagnosed. His fish never made it to the scale.

“I knew the weights were low, but I didn’t even look at (the leaderboard),” Gross recalled.

After seeing the lengthy weigh-in line and figuring everybody ahead of him had good or better fish, he opted to throw his fish back into the lake and go on to the service yard, not realizing that a 10-pound stringer would’ve easily put him in the top 50 after day 1. Ultimately, the top 55 finishers wound up collecting paychecks at that tournament. Gross got his engine issue squared away, caught 7-13 on day 2 and finished 185th. In the aftermath, though, he realized how costly his judgment call after day 1 was.

“It was probably the biggest lesson of my career,” he said. “It was a hard lesson. You weigh your fish, even if you have one.”

He rehashed his thought process with two-time FLW Tour Angler of the Year Bryan Thrift, with whom Gross has formed a bond. Gross said Thrift, who finished 13th with 23-04, told him he had erred and should’ve hauled his bag on stage. As things shook out, that decision likely cost him a spot in this year’s FLW Series Championship.

“There are a lot of reasons why it was a bad idea,” he said. “That woke me up. It was like someone poked me with a stick. I realized this isn’t a game. Every fish counts and it doesn’t matter if they’re small or big. You weigh them all. I was looking at a bigger picture and it blinded me for a minute.”

The bigger picture came back into focus at Toho, where Gross claimed his second career Tour victory and flipped the switch on what has been the most consistent and prosperous of his four seasons at the pro level. Since his win at Toho, he’s not finished lower than 44th in a Tour event, a surge that his him sitting third in Angler of the Year points entering the final tournament at Lake Champlain later this month. He’s also notched a pair of top-10 finishes at Lake Chickamauga on the triple-A circuits this spring.

After three straight seasons finishing in the 90s in Tour points, Gross has suddenly hit his stride this year. He’s a lock to compete in his first Forrest Wood Cup and is just 16 points back of current points leader John Cox.

“It gives you confidence and momentum knowing you’re not fishing for a paycheck, you’re fishing for the career side of it,” he said. "I’ve never been a points guy. If they fall in line, great, but I’ve always been looking for those opportunities to win. I think that’s where I messed up early on. Instead of salvaging what I had, I was always shooting for a top 10.

At the beginning of the season, few would have pegged Gross as an AOY contender, even him. Sure, he expected to be a factor at Chickamauga (he finished second to Cox), but to pull things together like he has delivered an immense boost to his confidence.

“I knew at some point I could do well, but it’s a blessing to be where I’m at,” he said. “When you do this for a living, you have to put your best foot forward every day. It’s hard to have an off day.”

And there have been times where he wouldn’t have minded an off day. Gross has been battling gout most of the season. His worst flare-up seems to affect his toes and elbow.

“I can get it under control, but when it flares up it’s hard to deal with,” he said, adding that he has learned to sense when a flare-up is coming so he can counter it before it takes hold.

While the Okeechobee blunder got under Gross’ skin, he’d already recorded a 6th-place finish at the Harris Chain Bassmaster Eastern Open and that gave him a shot of confidence heading to Toho. He put in a few days at Toho prior to it going off limits and he said that was a big contributor to his victory.

“It made a big difference because I like knowing an area offshore and where they can move to,” he said. “It makes it easier to see it first.”

After Toho, he finished 11th at Lake Seminole, then took ninth at the Chickamauga FLW Series. Finishes of 39th and 44th, respectively, in Tour stops at Grand Lake and Cherokee Lake solidified his Cup contender status and his runner-up showing back at Chickamauga in early May thrust him into the AOY chase.

“Grand was the one I cherish the most,” he said. “I caught small fish knowing I needed to catch something. I made a good decision on day 2. I’d been fishing for a limit, but something told me to pick up a flipping stick and I found ‘em. If I’d fished that way for two days I’d have been in the mix.”

Making good decisions at unfamiliar venues only served to fuel his momentum.

“It feels like home again,” he said. “I’ve always been consistent around the house, so I’ve been uneasy not being consistent. It feels good. I’m more confident doing what I’m doing now and I think confidence is about 90 percent of this game. I always thought everybody had somebody else out here helping them out, but I’ve found you have to help yourself out here.”

Gross has always considered Chickamauga his home waters and it sure treated him well this spring. He followed up his runner-up finish in the Tour event with a third-place effort in the Bassmaster Eastern Open, giving him three top-10s in three different circuits on the same body of water in the matter of two months.

“I love the lake, but I can tell you everything I’ve fished growing up has become community areas,” he said. “In those events, I fished places I wouldn’t have fished in regular team tournaments and the lack of pressure on those places is what got me those top-10s. I can go tomorrow and fish the same places and not get a bite.”

He takes a lot of pride in his string of strong finishes there.

“To be considered a hammer on Chick is a win in itself,” he added. “The lake is so good and there are so many good fisherman on it, but that lake can humble the best fisherman I know. To have three top 10s I feel blessed.”

Gross admits the AOY title has been on his mind ever since the Chickamauga Tour event, but he knows he’s facing another uphill climb at Champlain, where it’s expected a portion of the population of bass will be spawning.

“I think about it. It’d be great for several reasons, but I’m just trying to have another good finish and let the cookies fall where they fall,” he said. “I’m trying to finish off a great season and I’m honored to be near the top with the competition we have.”

He knows the two competitors ahead of him – Cox and David Dudley – won’t be pushovers at Champlain either, making his task that much tougher.

“The two guys ahead of me are two hammers,” he said. “It’s pretty awesome, but I have two of the best bed-fishermen ahead of me. To have a legit shot at it, I have to excel this time.” 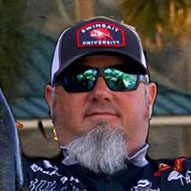