BACK
Big Rally By Meyer 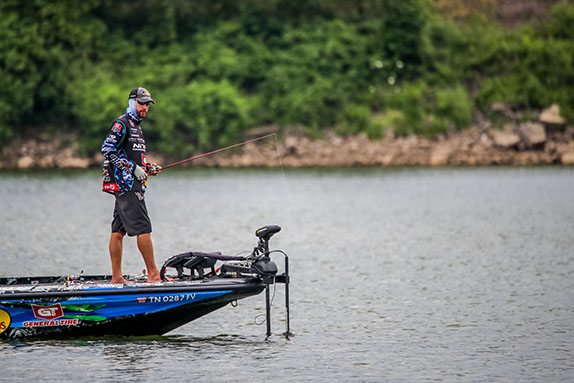 Ott DeFoe described his confidence level as "pretty good" heading into the Championship Round at Table Rock Lake.

Ott DeFoe almost dreads returning to a traditional tournament day for the Championship Round of the Table Rock MLF Bass Pro Tour (Version II). He's enjoyed the noon-to-8 p.m. timeframe that the tournament had been conducted under – and it's been good to him.

"I wish we were fishing at the same time we've been doing," said the reigning Bassmaster Classic champion who's advanced to the final day at both Table Rock derbies. "Those two hours from 6 o'clock until the end – it's so good!"

DeFoe, the winner of the Group B Shotgun Round, earned himself another $500 bonus by topping the Knockout Round standings with a 51-fish, 83-08 haul. He was one of three competitors to top 80 pounds for the day – Group B Elimination Round winner Kevin VanDam had 81-14 and Jesse Wiggins boated 80-10, with both anglers logging 46 fish.

Like DeFoe, Wheeler was a finalist in the first Table Rock derby two weeks ago. VanDam, Meyer, Avena, Wiggins and Suggs will all be making their final-round debuts.

Avena was the last angler to claim his Championship Round berth – he caught a 1-10 specimen with 3 1/2 minutes to go to slip past Shin Fukae. It was the second time this season that Fukae had been bumped to 11th at the end of a Knockout Round; it also happened at Lake Conroe in February.

Avena's final move of the day resulted in three fish over the last 15 minutes of the final round. He was forced to serve a two-minute penalty when the second one came off the hook and landed in the bottom of his boat as he swung it in.

"Honestly, it was kind of a stupid thing I was doing," he said. "All my dropshot setups were jacked up and I was down to one left. That first fish I caught opened the hook up and instead of retying, I bent it back. The second fish flexed the hook and that's when it happened.

"Between getting the penalty and catching a couple right at the end and then having to wait to find out if I'd made it, it was crazy. Having to wait (for potential ScoreTracker updates after the last lines-out call), that part's for the birds."

He admitted that his confidence level for the Championship Round isn't extremely high. 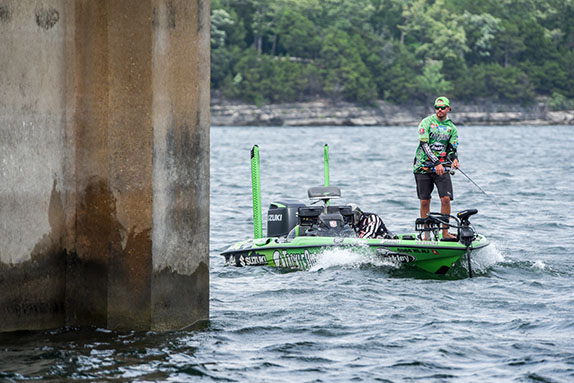 
Adrian Avena gained a berth in the Championship Round with his final catch with less than four minutes to go.

"I'm not too optimistic, but anybody can go out here and catch 70 or 80 pounds, so you never know. I'm just excited to go out and go fishing because this is such a great lake."

DeFoe again relied on a crankbait to compile the majority of his weight and he also caught some on a Neko rig. He's not playing the offshore game – he's fishing a considerable distance up the James River in fairly shallow, stained water.

"My confidence is pretty good," he said. "I feel like those fish are committed to what I'm doing and I don't know of any reason why it shouldn't work tomorrow morning, but anything can happen. I just hope (the time change) affects me less than the guys in the clear water."

Meyer caught more than 35 pounds in the final period to rise all the way up from 23rd place. He was more than 20 pounds on the wrong side of the cut line when he moved to a point that he'd never fished before.

"I knew I needed to go and do something different and I started running and hit two or three points, then I got on one that had a bunch of fish suspended over trees. It was like magic.

"There were fish schooling and I caught them on a topwater and a swimbait – it was so much fun. I caught three that were over 3 pounds and some other really good fish. I've done this full-time for 11 years and I've never experienced something like that in the last hour of a tournament day.

"That spot might only be good in the evening," he continued, "so I might be in bad shape tomorrow. But whatever happens, I'm going to go out and have fun."

Wiggins also pulled off a big comeback, but he made his move in the second period, when he climbed from 37th place to 11th by catching more than 36 pounds. He and VanDam both spent time atop the leaderboard in the third period.

Aaron Martens, the winner of the previous Table Rock tournament, ended up 14th. Russ Lane, who finished 37th, caught a 5 1/4-pound largemouth – the biggest fish of the tournament thus far.

The following anglers did not make the cut and will not compete in the Championship Round.