BACK
Pace A Distant 3rd

Jacob Wheeler caught 88 fish en route to winning the Group A Shotgun Round with 129-14.

Anglers on the MLF Bass Pro Tour continued to have a whale of a time on the first day of their second event at Missouri's Table Rock Lake in the span of three weeks. For two competitors, the Group A Shotgun Round was absolutely epic.

Jacob Wheeler and Shin Fukae both blew past the season-high for single-round weight on the first-year circuit, boating 129-14 and 112-04, respectively. Those marks obliterated the previous standard of 95-03 set by Bobby Lane in the Knockout Round of the previous Table Rock derby.

Anglers didn't make their first cast until noon and were on the water until 8 p.m. under the revised format that MLF instituted for the repeat visit that was necessitated by flooding at Oklahoma's Grand Lake. Wheeler, in particular, enjoyed the evening portion of the round as he caught 38 fish for 55-09 in the final 2 1/2-hour period.

"It was so much fun," said Wheeler, who boated 88 scorable fish for the day. "It'd be great to do this at a Tennessee River lake when the fish are offshore and they don't start generating current until 10 or 11 o'clock – it's crazy good just before dark.

"I don't think every tournament should be like this, but doing it at certain ones would be really cool."

Fukae, who registered 66 fish for the day, wasn't quite as enthusiastic about the unique daily schedule.

"I'm so exhausted and hungry," he said about 90 minutes after the day's last lines-out call. "I just got back to the campground, I still haven't eaten anything and it's already my (usual) bedtime. It feels really weird."

The weather was clear and calm on day 1 and should remain that way through Saturday, when the 40 anglers in Group B will conduct their Shotgun Round. After that, scattered thunderstorms are predicted for each remaining day of the tournament, which concludes on Wednesday.

Wheeler, who finished 5th two weeks ago, relied primarily on a swimbait, but also employed a dropshot, a shaky-head, a hair jig and a topwater. Fukae actually beat him to the 100-pound threshold, but his huge final period garnered him the $500 bonus for winning the round. 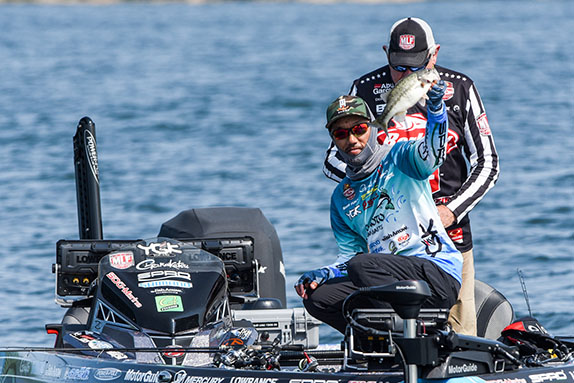 
Shin Fukae beat Wheeler to the 100-pound mark, but ended the day 17 1/2 pounds behind the leader.

"Shin was just crushing them and if I made three straight casts without catching anything, he'd go up by another 5 pounds," Wheeler said. "When I got to 100 he had 107 and I was like 'Oh, heck no. That's when I shifted into overdrive.

"I went to another place and caught about 20 pounds in 20 throws and I thought that was pretty dang good. Once I got up by 12 or 13 pounds, I started to back off a little. I let off the gas in the last 45 minutes – I probably could've caught 150 pounds or 100 bass. The biggest thing in any sport is when you have peers pushing you, it makes you better and you go even harder. I was just catching them and reeling them in and putting them on the scale and it felt like I was firing on all cylinders."

He doesn't expect to catch nearly as many fish when he returns to the water on Sunday for his group's Elimination Round.

"It doesn't make a lot of sense to try to get to 200 pounds or anything like that. I'll try to be smart about it; I hit some places today that I think are going to get a lot of pressure this week and I'll have to find other stuff that's not getting beaten up so bad."

Fukae's first fish of the day was a largemouth, but he caught 65 spotted bass after that – all from one area on a dropshot. It's a place he'll return to on Sunday and he said he'll stay there until he's caught 30 or 40 pounds.

He's staged a big turnaround, as he ended up 75th in the prior Table Rock tournament.

"I'm fishing pretty deep, probably deeper than anybody," he said. "I'm using my Lowrance depthfinder with DownScan, SideScan and sonar. As soon as I find the fish, I just drop the bait.

Meyer had a great time catching schooling fish with a topwater in the last round. One of his casts resulted in him boating a 2-pound smallmouth and a keeper spot.

"Honestly, it was super-cool," he said. "It was obviously weird getting to sleep in, but my mind is in tournament mode and I was still up at 6 o'clock. Doing my tackle in the morning was probably the weirdest thing and then I went and had a big breakfast.

"The only thing that's ever sucked about bass fishing is having to get up at 4 a.m. Having a tournament like this is really cool and unique."

Day 1 Standings (Group A Shotgun Round)